Entrepreneurs and pro-life voters: A closer look at Latinos who support Trump 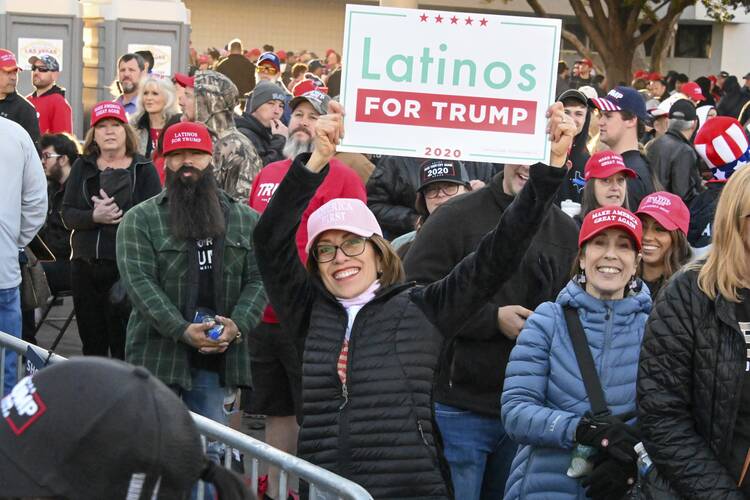 Supporters gather outside before a rally for President Donald Trump at the Las Vegas Convention Center on Friday, Feb, 21, 2020. (Dylan Stewart/Image of Sport via AP)

Before starting her own business, Sylvia Menchaca learned the ins and outs of the restaurant industry from her family, who founded La Canasta in Phoenix, Ariz., in 1962. Sylvia’s Off the Grill, also in Phoenix, serves her family’s popular handmade tortillas and authentic Mexican cuisine.

Ms. Menchaca is among the 23 percent of U.S. Latino voters who, according to a recent study, strongly support President Trump. Overall, the Pew Research Center found that 30 percent of Latino voters support Mr. Trump.

“He’s what we prayed for. In our family, a lot of people prayed for the United States to be saved,” she said. “I think he’s the best president we’ve ever had.”

The minimum wage can have a major impact on small restaurants, Ms. Menchaca said, explaining that when wages go up, it raises the cost of doing business and restaurants raise their prices. In the past, she said, she could pay lower wages to high school and college students who were not providing for children.

She hopes Mr. Trump will address the issue if he wins a second term. She would like the federal minimum wage law to distinguish between the first jobs traditionally held by students and the jobs held by those providing for families.

“In our family, a lot of people prayed for the United States to be saved. I think he’s the best president we’ve ever had.”

Ms. Menchaca said she first wanted Mr. Trump to run for office in 2008 and has supported him since he announced his candidacy in 2015. “What this administration has done has helped a lot of people,” she said. “Not everyone is going to be affected the same way. But we’re employing more people.”

Those kinds of numbers are welcomed by entrepreneurs like Ms. Menchaca, who described herself as a conservative, pro-life Republican and said she likes when Mr. Trump “evokes the name of God.” She relates to Mr. Trump as an entrepreneur and compared being a business owner to being a parent.

Mr. Trump recognized the contributions of Latino business leaders during the Latino Legislative Summit on March 4.

“Our Latino communities have always been a vital and indispensable part of the American family,” he said. “From the beginning of our republic, the exceptional drive, talent, faith, skill, imagination and devotion of Latino Americans has uplifted our entire nation. You’ve deeply enriched American life in history and culture.”

“Latinos are not a monolithic voting group. They never have been.”

“Latinos are not a monolithic voting group. They never have been,” said Luis Fraga, the director of the Institute for Latino Studies at the University of Notre Dame. On average, he said, just under 30 percent of Latinos have supported the Republican candidates for president over the last several decades. “That’s the norm, no matter who the presidential candidate is,” Mr. Fraga said.

The high point was likely President George W. Bush’s 35 to 40 percent support in 2004, though those numbers are debated; the low was Senator Bob Dole’s 21 percent in 1996. Mr. Trump’s current support falls within that range. But one Election Eve poll, Latino Decisions, suggested that only 18 percent of Latinos supported Mr. Trump in 2016.

In fact, the percent of Latinos who identify as Republican has remained relatively steady for the last 40 years, according to Stephen Nuño-Pérez, chair of Northern Arizona University's department of Politics and International Affairs.

President Nixon sought the Latino vote in his re-election campaign, Mr. Nuño-Pérez said, and a significant segment of that community has been receptive. Nevertheless, he added, the majority—60 to 75 percent—of Latinos are Democrats.

Those Latinos who do find a home in the Republican party tend to be from certain groups, Mr. Nuño-Pérez said. Those groups include individuals who are involved with business, those who prioritize certain economic concerns and those who see the aesthetic of Republicanism as more patriotic. “Some believe that if you’re an American, this is what you do,” he explained.

Others are drawn to the Republican party for religious reasons, especially issues related to abortion and traditional marriage, Mr. Nuño-Pérez said. Yet there are significant differences between evangelical Protestants and Catholics, for example. In 2012, one poll found that Latino Catholics strongly supported President Obama’s re-election while Latino evangelicals were more closely divided.

“Republicans are very capable of reaching out to Latinos,” Mr. Nuño-Pérez said, noting how the support of many in the Cuban community has benefited the Republican party. “But more recently, they have seen an electoral benefit of changing that tactic.”

Many of those with Latin American heritage come from countries with histories of deep racial tensions, Mr. Nuño-Pérez said. Those who lean Republican “tend to believe that if they have a job and work harder, they will succeed,” he said. “They deny that racism has the power others say it has.”

Reymundo Torres of the Arizona Latino Republican Association said that Latinos who support Mr. Trump are not just conservatives, but also those who agree with his “America first” policies.

“He’s doing more for Latinos without saying he’s doing things benefiting Latinos,” Mr. Torres said, noting the low unemployment rate, new jobs and the economy. “That benefits the entire country. Latinos who support Trump would support anyone with those numbers.”

Mr. Torres, who described himself as a politically conservative Catholic, takes issue with the church’s positions favoring those who seek refuge in the United States. He has bounced from one parish to the next, finding homilies related to immigration “disheartening.” His family fled to the United States in 1915, during the Mexican Revolution. “We came here to save our lives,” he said. “We weren’t fleeing poverty.”

“In so many homilies, they highlight the holiness of poverty and the evil of success,” Mr. Torres said. “It’s horrible. The church has hedged its bets. They’re trying to keep the pews filled.”

At the same time, he said his faith informs his views on abortion and respect for the elderly. Mr. Torres finds his values reflected in the Trump administration. Last year, the Public Religion Research Institute found that most religiously affiliated Latinos were also pro-life, including 58 percent of Hispanic Protestants and 52 percent of Hispanic Catholics.

Yet, according to Jeremy Cruz, assistant professor of theology and religious studies at St. John’s University in Queens, the pro-life issue is not a major deciding factor in Latino voting trends. In a recent Latino Decisions poll, only 2 percent of Latino voters cited limiting abortion as an important issue facing the community. The cost of health care (25 percent) and improving incomes (19 percent) were the top issues for the community, according to the poll.

Some media reports rely too heavily on exit polling data, Mr. Cruz said, noting that the pan-ethnic term “Latino” can be unhelpful when trying to understand trends. For example, studies rarely distinguish between Afro-Latinos and black voters. Also, a sizable portion of Latinos, Mr. Cruz said, come from communities with prejudices against blacks and indigenous peoples.

“Some Latinos are receptive to Trump’s messages,” he said. Some in the community do not see those of African or indigenous backgrounds as Latinos at all.

Mr. Cruz noted that a number of Latinos work in immigration enforcement. But in general, he said, the media has given a disproportionate amount of coverage to Republican Latinos, whom he considers to be more of a niche group.

While he is part of that group, Ed Arroyo is also unhappy with the media. He believes mainstream media outlets have been unfair to Mr. Trump.

That said, Mr. Trump was not Mr. Arroyo’s first choice. “Probably third or fourth,” he said. “I am not that happiest person that he tweets so much,” Mr. Arroyo said, referring to Mr. Trump’s propensity to express his opinions on Twitter.

“But when he did get the nomination, there was no doubt that he was going to get my vote,” he said. “The other choice wasn’t an option.”

“What [Mr. Trump] has done with the economy was a necessity,” Mr. Arroyo said. “You can’t let jobs go overseas. I’m glad he pressured companies to keep jobs here.”

He also likes the president’s stance on abortion and border security. “I wouldn’t let someone come into my home without knowing who they are,” Mr. Arroyo said. “And I believe there are people coming to this country that don’t make it better.”

But he would like to see something done in terms of immigration reform. He knows people who have tried to come legally and he knows it takes a long time.

Mr. Arroyo, whose grandparents immigrated to the United States from Mexico, said he would give Mr. Trump a B+.

“It doesn’t bother me that he can’t articulate eloquent sentences together. Actions speak louder than words,” he said. “He has been successful amid adversity. He has had so much resistance in the media and Congress. I think he’s doing everything he possibly can.”

This story has been updated to clarify remarks from Jeremy Cruz.