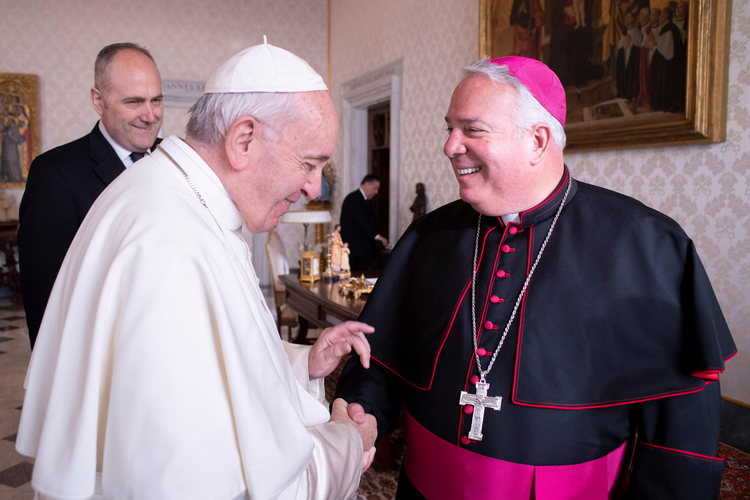 Pope Francis has appointed Bishop Nelson J. Perez, the 58-year-old son of Cuban exiles, as the new archbishop of Philadelphia, the Vatican announced today. He becomes the third Hispanic archbishop in the United States and the first to serve in this archdiocese.

He will succeed Archbishop Charles Chaput, O.F.M. Cap., for many years a leading figure in the church in the United States, who did not always fully share Pope Francis’ vision, as he made clear publicly on a number of occasions. Archbishop Chaput, who has headed the archdiocese for eight years and has been a bishop for 32, handed in his letter of resignation upon turning 75 last September, as all bishops are required to do.

“The new archbishop is a man who fully shares the vision of Pope Francis and in so many ways is very much like him,” a prelate who knows him well but asked to remain anonymous told America after the Vatican broke the news at noon on Jan. 23. The same source said it is “highly significant” that the pope has chosen a Hispanic archbishop for this important diocese with over one million members, many of whom are Hispanic, and some 500 priests.

Bishop Nelson J. Perez becomes the third Hispanic archbishop in the United States and the first to serve in this archdiocese.

During his visit to Rome last September, as part of a delegation of U.S. bishops and lay people led by Archbishop José Gomez to present Pope Francis with the “Proceedings and Conclusions of the Fifth National Encuentro of Hispanic/Latino Ministry,” Bishop Perez told America, “The Hispanic population is already the largest minority group in the United States, but it is a diverse group because they come from 23 different cultures and countries and different migrations over time.” He said he envisaged that in 10 to 20 years “probably more than 50 percent of the Catholic population of the U.S. will be Hispanic.”

Pope Francis had time to get to know this friendly and outgoing bishop on that occasion and learned that he shares the vision of “The Joy of the Gospel,” his papacy’s programmatic document. He met the bishop again on Dec. 10, 2019, when the bishops from Ohio and Michigan spent time with the pope during their “ad limina” visit.

In addition to all this, Francis knows that Bishop Perez has spoken out strongly on the problem of racism. He recently participated in a major public event in Cleveland, with many faith leaders, in honor of Martin Luther King Jr., a figure also much admired by Pope Francis.

Francis appointed him as bishop of Cleveland, Ohio, on July 11, 2017, and today named him the 10th archbishop of Philadelphia, a diocese that the pope visited for the World Meeting of Families in 2015.

Pope Francis had time to get to know this friendly and outgoing bishop on that occasion and learned that he shares the vision of “The Joy of the Gospel.”

“I am deeply grateful to the@Pontifex for appointing me as the next archbishop of@ArchPhilly. It is with great joy tinged with a sense of sadness that I accept the appointment - joy that I will be returning to serve@ArchPhilly, sadness in that I will be leaving@DIOCESEofCLE”, Bishop Perez posted on Twitter after the announcement was made. He added: “I will never forget the kindness and hospitality of the people of the@DIOCESEofCLE. They will remain in my heart and prayers always.”

I am deeply grateful to the @Pontifex for appointing me as the next archbishop of @ArchPhilly. It is with great joy tinged with a sense of sadness that I accept the appointment - joy that I will be returning to serve @ArchPhilly, sadness in that I will be leaving @DioceseofCLE.

Bishop Perez was born in Miami, Fla., on June 16, 1961. After obtaining a degree in psychology at Montclair State University, N.J., in 1983, he taught for a year in an elementary school in Puerto Rico, the Vatican said. He then studied for the priesthood at Saint Charles Borromeo Seminary at Overbrook, Pa., where he obtained a master’s degree in theology.

Nelson J. Perez was ordained priest for the archdiocese of Philadelphia on May 20, 1989, and is expected to return there as its archbishop probably before Lent. But it is a diocese that is undergoing not only financial difficulties, which Archbishop Chaput sought to rectify, but is also facing a federal investigation into clergy sex abuse.

After ordination, Bishop Perez served as an assistant priest at Saint Ambrose parish in Philadelphia for almost four years and then became vice director of the archdiocesan office for Hispanic affairs (1990-1993). He then founded and was the director of the Catholic Institute for Evangelization (1993-2002).

He was a professor of psychology and religious studies at La Salle University in Philadelphia from 1994 to 2008. He served as parish priest of Saint Agnes parish in West Chester from 2009 to 2012, when Benedict XVI appointed him as auxiliary bishop of Rockville Centre, N.Y., where he had responsibility for the Eastern vicariate and the Hispanic apostolate.

Archbishop Perez serves as chair of the Committee for Cultural Diversity in the Church of the U.S. Conference of Catholic Bishops and is also a member of its administrative committee and of the Committee on Religious Liberty.

Correction (Jan. 24): The community of West Chester, Pa., was misidentified (as West Cheshire) in an earlier version of this report.