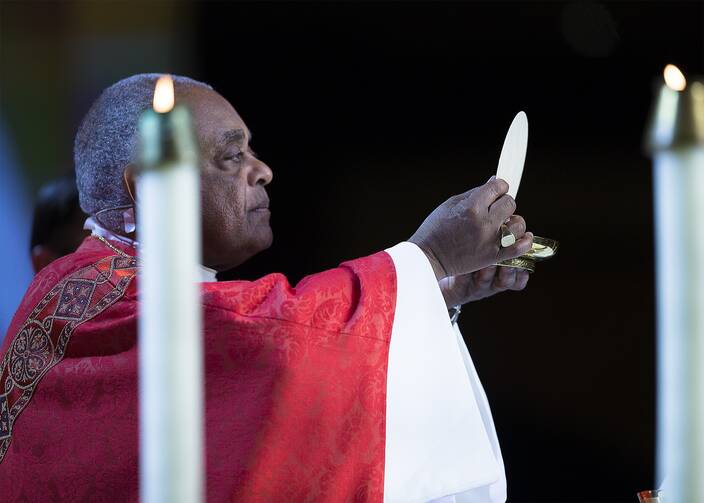 Archbishop Wilton Gregory (then of Atlanta), presides over the Mass marking the feast of St. Matthew during the Fifth National Encuentro, or V Encuentro, in Grapevine, Texas, Sept. 21, 2018. (CNS photo/Tyler Orsburn)

Pope Francis announced today that he will create 13 new cardinals at a consistory in the Vatican on November 28, among them Archbishop Wilton D. Gregory of Washington, D.C., who becomes the first Black cardinal of the United States.

Nine of them are cardinal electors with a right to vote in a conclave, while the other four are over the age of 80 and do not have that right. This will bring the total number of electors to 128 after the consistory, if one excludes Cardinal Angelo Becciu, who has renounced his rights as a cardinal at the request of the pope. Cardinal Donald Wuerl, Archbishop Gregory’s predecessor in Washington, will turn 80 in November before the consistory, becoming ineligible to vote in a conclave. Of the current electors after the consistory, 73 will have been appointed by Pope Francis.

Significantly, the Maltese bishop Mario Grech was first on the list read out by the pope after reciting the Angelus today, Oct. 25. He is the new secretary general of the Synod of Bishops. Three of the new electors are Italian, and one from each of six other countries.

Here is the full list, in the order read out by the pope.

Four over the age of 80 and so not electors:

He concluded by asking people to pray for the new cardinals, “who by confirming their adoration to Christ, may help me in my ministry as bishop of Rome, for the good of all the people of God.”

Update: The count of cardinal electors was clarified to reflect the fact that Cardinal Wuerl will turn 80 between now and the consistory.