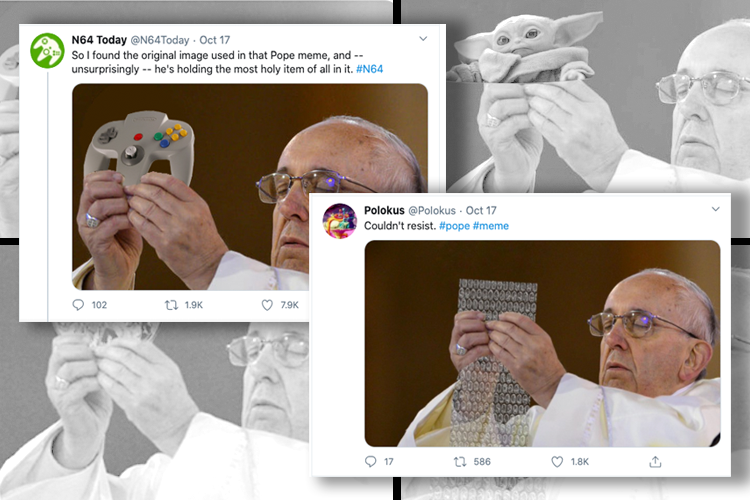 Are these digitally altered “Pope memes” where the Eucharist is replaced by everyday items just harmless fun? You might be surprised to find that the Catholic Church teaches that ridicule of this central act of worship is a sacrilege and a grave sin. (Composite image by Shawn Tripoli)

Hocus-pocus! For most of us, the phrase conjures up images of a magician or a juggler or someone casting a spell. Sometimes it is just used to describe muttered, meaningless jargon.

It started out as a slur against Catholics.

During the Eucharistic prayer at Mass, the priest repeats the words of Jesus at the Last Supper: “This is my body.” In Latin, the phrase is “Hoc est enim corpus meum,” parodied by Protestants after the Reformation as “hocus-pocus,” the mutterings of poorly educated (to use the 17th-century phrase of Archbishop John Tillotson of Canterbury) “priests of the Church of Rome in their trick of Transubstantiation.” (Almost all Protestant denominations dropped transubstantiation—the belief that “by the consecration of the bread and wine there takes place a change of the whole substance of the bread into the substance of the body of Christ our Lord and of the whole substance of the wine into the substance of his blood”—during and after the Reformation.)

In the viral memes, the eucharistic host Francis is holding is replaced by various other objects, including a Nintendo controller, Baby Yoda and bubble wrap.

The moment of consecration became a hot topic of conversation on social media platforms last week with the proliferation of “pope memes,” digitally altered photos of Pope Francis celebrating the Eucharist at a Mass at the Basilica of the National Shrine of Our Lady of Aparecida in Brazil in 2013. In the viral memes, the eucharistic host Francis is holding is replaced by various other objects, including a Nintendo controller, Baby Yoda from the popular Star Wars show “The Mandalorian,” an iPhone 12, bubble wrap and many more. Not all were in good taste, and the trend was not well received by many Catholics on social media.

Catholics are sharing memes online. Is this the New Evangelization?
Angelo Jesus Canta

Why not? Because ridicule of the central act of worship in the Catholic Church is considered a sacrilege. According to the Catechism of the Catholic Church, sacrilege “consists in profaning or treating unworthily the sacraments and other liturgical actions, as well as persons, things, or places consecrated to God.” Further, the church specifically mentions the gravity of sacrilege when it is directed toward the Eucharist: “Sacrilege is a grave sin especially when committed against the Eucharist, for in this sacrament the true Body of Christ is made substantially present for us.”

Sister Theresa Aletheia, a Catholic woman religious with a large following on Twitter, called the trend “extremely disturbing” and urged readers not to promote it. “The pope meme is not funny,” she said in a tweet. “If you’re Catholic (or anyone who desires to have a modicum of respect for someone else’s deeply held religious beliefs) don’t tweet or retweet it.”

More serious desecrations of the eucharistic host have occurred historically in “Black Masses” that parody the Catholic Mass using a consecrated host.

Simcha Fisher, a frequent contributor to America, also objected to the trend. “In the original photo, the object is a host being consecrated. This means being turned from bread into the actual body and blood of God,” she said on Twitter. “I know most people don't believe this is what happens at Mass, but Catholics do. It is the holiest and most central moment of our entire faith. It really hurts to see it held up for ridicule.”

More serious desecrations of the eucharistic host have occurred historically (though often more in rumor than confirmed reality) in “Black Masses” that parody the Catholic Mass using a consecrated host. In May 2014, a group at Harvard University caused a significant controversy by announcing it would hold a “Black Mass” on campus (though the group denied it would use a consecrated host).

[Related: So, was the Met Gala sacrilegious?]

Francis X. Clooney, S.J., the Parkman Professor of Divinity at Harvard Divinity School, penned an op-ed in the Harvard Crimson, criticizing both the announcement and the suggestion that it was just a historical reenactment. “This is, after all, a practice that, as far as its murky history reveals, seems often to have included the inversion and blaspheming of Catholic sacramental practice, as well as actual worship of Satan,” Father Clooney wrote. “Will these dimensions be present in Monday’s enactment? And what’s next? The endeavor ‘to learn and experience the history of different cultural practices’ might in another year lead to historical reenactments of anti-Semitic or racist ceremonies familiar from Western history or parodies that trivialize Native American heritage or other revivals of cultural and religious insult.”

Most of the folks creating “pope memes” on social media are not seeking to blaspheme or denigrate the Eucharist. Many, no doubt, probably consider the whole thing hocus-pocus.

The Harvard Chaplains (the interfaith council of chaplains connected with Harvard) also strongly criticized the plan at the time, saying that “a Black Mass by its very nature involves the mockery and ridicule of the Christian sacrament of Holy Communion,” and that for many Christians,

[T]he practice of sharing the bread and the wine of Communion embodies some of their deepest beliefs about humanity’s relationship to the transcendent as reflected in the life and teachings of Jesus. For some of us, it is a sacred rite to be treated with the utmost respect and love. For this reason, many in our community—especially our Roman Catholic brothers and sisters who appear to be the target of this event—are understandably distraught and hurt when they learn that some of our students believe that an appropriate way to engage in learning about the religious beliefs and practices of others is to denigrate them through a mock performance like a Black Mass.

Of course, most of the folks creating “pope memes” on social media are not seeking to blaspheme or denigrate the Eucharist in the same sense participants in a “Black Mass” do. Many, no doubt, probably consider the whole thing hocus-pocus. Nevertheless, that line in the Catechism is still there: “Sacrilege consists in profaning or treating unworthily the sacraments and other liturgical actions, as well as persons, things, or places consecrated to God.”