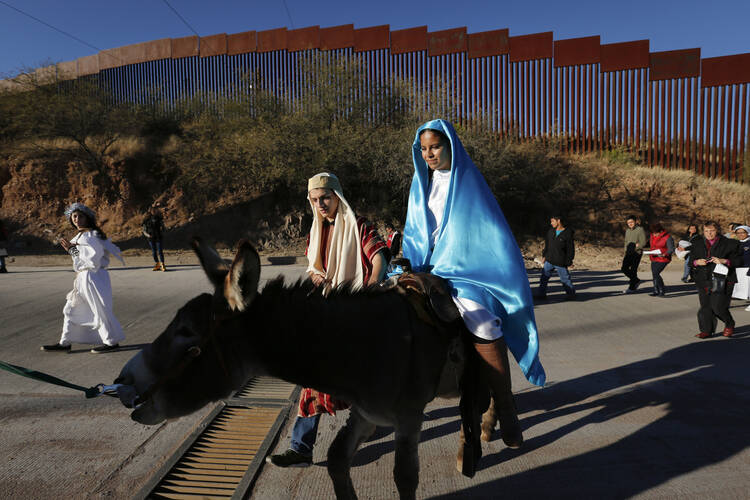 Saul Gonzalez and Kenia Salas play the parts of Joseph and Mary as they make their way along the international border fence in Nogales, Mexico, Dec. 20. (CNS photo/Nancy Wiechec)

Jesus is for everyone. There is no question about that. In the Gospel of Matthew, Jesus himself charges the apostles to “make disciples of all nations.” And in case there was any doubt, the accounts of the early disciples in the Acts of the Apostles makes it pretty clear that the message of Christ was intended for everybody.

Still, when I had the occasion to study the Gospels again recently, I couldn’t avoid a new realization. One of the four Gospels is far more, well, “Latino.” There is just something about this one Gospel that resonates more with the Latino cultures I grew up within Latin American and the United States. That is the Gospel of Luke. From the opening, to the hymns, to the road to Emmaus, it feels like the Gospel was written for Latinos. Let me explain.

Luke, along with Matthew and Mark, are what scholars call the synoptic Gospels. They are so similar that many speculate Matthew and Luke were written with a copy of Mark in hand. The Gospel of John (my personal favorite) is a totally different work. Nevertheless, there are a number of stories that appear only in one of the four Gospels. In Luke, for example, there are many unique episodes the church remembers during Advent.

From the opening, to the hymns, to the road to Emmaus, it feels like the Gospel was written for Latinos.

Las Posadas, which literally means “the inns,” is a Latin American reenactment of the Holy Family’s search for lodging in Bethlehem just before the birth of Christ. It is usually staged in neighborhoods but also in churches or schools. Two children play the role of Mary and Joseph and other participants either play innkeepers or accompany the group as they process from one house to the next. If children are not playing Mary and Joseph, participants carry statues of Mary and Joseph.

There is only one Gospel that alludes to this Advent tradition. The author of the Gospel of Luke writes that Mary “wrapped him in swaddling clothes and laid him in a manger because there was no room at the inn” (2:7).

Las Pastorelas is another Latin American custom that reenacts a story about Christ’s birth from the beginning of Luke’s Gospel. This tradition, which tells of the shepherds who visited baby Jesus in Bethlehem, has a few more lines of Scripture for inspiration (2:8-20). (If you don’t remember this from the Gospel itself, you may know the lines quoted by Linus in “A Charlie Brown Christmas,” though Linus does not use the New American Bible translation.)

Now, a possible argument against Luke’s Latinidad is that he does not include the story of the Wise Men.

“For today in the city of David a savior has been born for you who is Messiah and Lord,” the angel of the Lord tells the shepherds (2:11-12). “And this will be a sign for you: you will find an infant wrapped in swaddling clothes and lying in a manger.”

Now, a possible argument against Luke’s Latinidad is that he does not include the story of the Wise Men. Many customs mark the coming of the Three Wise Men in Latin America on Jan. 6, the feast of the Epiphany. In Mexico, for example, the day is celebrated with the traditional Mexican Rosca de Reyes, or King’s Cake. But, alas, the Wise Men are from Matthew (2:1-12).

Luke leads all the evangelists when it comes to food. This might seem a little light-hearted, but only a little. No Latin American gathering is complete without food. And in the Gospel of Luke, there are more references to meals than in any other Gospel. Jesus breaks bread with tax collectors, sinners, Pharisees and the two disciples he meets on the road to Emmaus (24:30-35). When the Risen Lord appears to the apostles, he eats fish with them (24:41-43).

Luke leads all the evangelists when it comes to food. This might seem a little light-hearted, but only a little. No Latin American gathering is complete without food.

The author of the Gospel notes at least 19 different meals, 13 of which do not appear in any other Gospel. Food and a celebratory meal also feature prominently in the parable of the prodigal son (15:11-32). These meals reveal a communal dimension to the Gospel, that also typifies the Latin American church.

Furthermore, the Acts of the Apostles, which is written by the same author as the Gospel of Luke, describes the loosening of certain dietary restrictions. This paves the way for some of Latin America’s most delicious cuisine, including carintas, curanto, lechón asado and pernil.

Food is another lens through which to understand Luke’s emphasis on the marginalized. Food is a basic human need that binds us together. Yet the poor often go hungry. This focus on the poor is exemplified in Luke’s account of the Sermon on the Plain, where Jesus says, “Blessed are the poor” (6:20). By contrast, in the Sermon on the Mount in Matthew, Jesus says, “Blessed are the poor in spirit,” (5:3).

The focus on the poor resonates with Latinos because so many people in Latin America live in poverty.

The Catholic Charismatic Renewal, which some have called “the Latin American church’s largest and most dynamic lay movement,” can be understood as a work of the Holy Spirit. I have had a chance to report on and experience this movement numerous times. For many, it is a way into a more vibrant, communal faith.

The Gospel of Luke also underscores the work of the Holy Spirit. Jesus is conceived by the Holy Spirit (1:35), and Luke says God will give the Holy Spirit to all who ask (11:13). That is not to mention the outpouring of the Holy Spirit at Pentecost, an account of which we find in the Acts of the Apostles (2:1-13). Jesus told his followers this would happen. Before he ascends into heaven, Jesus promised that they would be “clothed from power on high” (Jn 24:49).

Is there a better Gospel to represent the Francis pontificate? I doubt it.

The Catholic Charismatic Renewal began spreading throughout Latin America just a few years after it began at Duquesne University in 1967. First in Bolivia and Peru, then in the Dominican Republic, Guatemala, Costa Rica, Colombia and Chile. Today, it continues to draw millions into a closer relationship with Christ through the Holy Spirit.

Mary speaks more in Luke’s Gospel than in any other. (In fact, Matthew and Mark do not attribute any direct quotations to her.) The Gospel also gives us a hint at Mary’s interior life, for example, when the author writes that “Mary kept all these things, reflecting on them in her heart” (2:19). In Acts, Luke also notes that she was with the first community in Jerusalem (1:14). Mary’s role in Jesus’ life is clear in Luke’s Gospel, and her role is clear in the life of the faithful in Latin America.

This is all in good fun, of course. Latinos read all the Gospels (or at least we’re supposed to). And the Gospel of Luke resonates with all cultures. But I think it is worth highlighting these special connections between the Gospel of Luke and Latin American culture. It can be a way to better understand this growing community in the church in the United States.

And if you think about it, the Gospel of Luke is a great way to understand our first Latino pope. Is there a better Gospel to represent the Francis pontificate? I doubt it.