10 things to know about the Virgin of Guadalupe 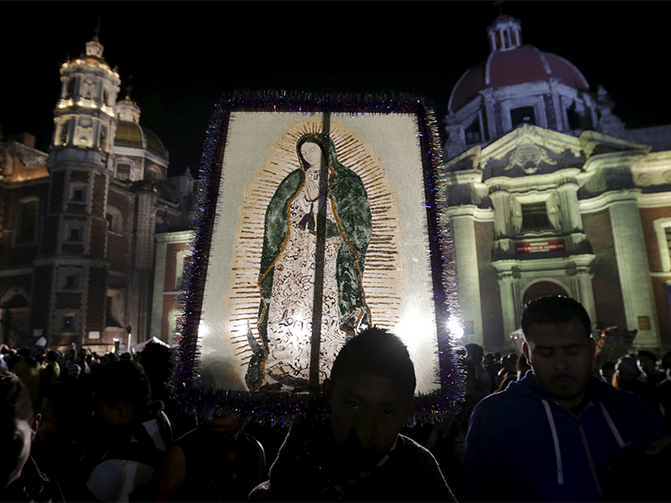 A pilgrim holds up an image of the Virgin of Guadalupe at the Basilica of Guadalupe during an annual pilgrimage in honor of the Virgin, the patron saint of Mexican Catholics, in Mexico City on Dec. 12, 2015. Photo courtesy of Reuters/Henry Romero

Mexicans will tell you that 90 percent of them are Catholic but 100 percent are Guadalupan.

While the proportion of Catholics in Mexico isn't accurate anymore, the Virgin of Guadalupe remains a cherished part of Mexican national identity, reflected in the fact that millions of women and men are named Guadalupe, many going by the nickname "Lupe."

As a specialist in Latin American religion, I've always been fascinated by the number of devotees to Our Lady of Guadalupe.

The Virgin purportedly appeared to an Aztec peasant, Juan Diego, for the first time on a hill called Tepeyac on Dec. 9, 1531, and told the Christian convert, in his native language of Nahuatl, that she wanted a church built in her honor on the site of her apparition.

Diego sought out the archbishop of Mexico City to share news of the miraculous apparition but was met with skepticism. The brown-skinned Virgin appeared to the Aztec peasant a second time, in which Diego recounted what she already knew, that he’d been rebuked by the archbishop. Determined to have her church built and named Guadalupe, the Virgin instructed the middle-aged Aztec to try again with the top prelate in Mexico.

The dubious bishop asked for a sign of the Marian apparition at Tepeyac. During her third apparition, Guadalupe told Diego to gather some Spanish roses that had miraculously bloomed in his “tilma,” or cactus-fiber cloak. The determined convert returned to the bishop and unfurled his tilma revealing not only the unseasonable roses but a miraculous image of the Virgin imprinted on the cloak, which can be seen today at the Basilica of Our Lady of Guadalupe in Mexico City.

La Virgen Morena (the Brown Virgin) is not only patroness of Mexico but also Empress of the Americas, from Chile to Canada. While other manifestations of Mary claim at most a region or country, Guadalupe is the only one to reign over two continents. And if that's not enough, for a brief period in the mid-20th century she was also declared patroness of the Philippines, home to the world's third-largest Catholic population.

Before Mexican folk saint Santa Muerte caught my scholarly attention in 2009, I had conducted two years of research on the Mestiza Virgin for a book project that was put on hold. On her feast day, Dec. 12, I thought I'd share 10 fascinating facts about the Virgin who led Mexicans to independence from Spain:

1. Many Mexicans aren't aware that the original Guadalupe is from Extremadura, Spain.
In fact, Christopher Columbus was a devotee and even named the Caribbean island of Guadeloupe in her honor, after she purportedly saved his fleet from a storm at sea. The Spanish Guadalupe is one of several black European virgins, so in her Mexican incarnation she actually became lighter-complexioned as the Virgen Morena.

2. Prior to Guadalupe's alleged appearance in 1531, an Aztec goddess had been worshipped at the same site.
The Aztec goddess's name, Tonantzin, means "Our Mother" in the Aztec language of Nahuatl, so some skeptics contend that the Spanish colonial church concocted the story of Guadalupe appearing to Juan Diego as a way to convert his fellow Aztecs and other indigenous groups to Christianity.

3. Despite his canonization in 2002, there is no hard evidence St. Juan Diego ever existed.
In fact, at the time of the controversial canonization the abbot of the basilica, Guillermo Schulenberg, resigned, claiming that Juan Diego had never existed and "is only a symbol." The Aztec peasant was canonized, nonetheless, as part of a strategy to retain indigenous Catholics in Mexico and across Latin America who have been defecting in droves to Protestantism, especially Pentecostalism.

4. Art historians have discovered that depictions of the Virgin's skin color have become progressively darker.
Studies on her historical development, such as those by historian Stafford Poole, demonstrate that contrary to legend, it was Mexican creoles (people of Spanish descent born in Mexico), and not indigenous converts, who were the first devotees of Guadalupe and the primary propagators of her cult.

Artistic renditions of Guadalupe became noticeably darker on the heels of the Mexican Revolution (1910-20), which led to the exaltation of the mixed-race mestizo as the new model of Mexicanness.

5. Mexico's independence from Spain in 1810 transformed her into the national patroness.
Independence leader Father Miguel Hidalgo launched the campaign for independence with the battle cry "Death to the Spaniards and long live the Virgin of Guadalupe!" The image of the Mexican Virgin emblazoned on flags, banners and peasant sombreros became the insignia of the armed rebellion against Spanish rule. Spanish troops, on the other hand, were led by the Virgin of Remedies, who was the pre-eminent advocation of Mary in Mexico until eclipsed by Guadalupe.

6. La Morena remained relatively unchanged in artistic renditions until as recently as the 1980s.
The first artists to experiment with novel depictions of the Empress of the Americas were Mexican-Americans who didn't feel as culturally and religiously constrained as their Mexican counterparts in exploring new ways of representing her, using all kinds of media.

A bare-breasted Guadalupe created by artist Paz Winshtein was the object of considerable controversy when it was displayed at a gallery in Santa Fe, N.M., in 2014.

7. The etymology of her name is the subject of considerable debate.
Some linguists and historians point to Nahuatl origins while others, more convincingly, remind us that the name "Guadalupe" already existed in Spain, and thus we should look there for its etymological genesis. There is little doubt that the prefix "Guada" comes from the Arabic "wadi," or river valley. The jury, however, remains out on "lupe," which many assert comes from the Spanish "lobo" ("lupus" in Latin), or wolf.

8. Guadalupe was an integral part of the Mexican Revolution (1910-20).
Fighting under the slogan "land and liberty," revolutionary peasant leader Emiliano Zapata and his fighters carried the Mestiza Virgin on banners into battle against Mexican oligarchs. Some Zapatista guerrillas carried on the tradition during their uprising in 1994 in the southern state of Chiapas.

9. In 1929 the official photographer of the basilica discovered an image of a bearded man in her right eye.
Two decades later another "expert" not only confirmed the presence of the original bearded man but also claimed to see it in both her eyes. Since then, the "secret of her eyes" has expanded to include images of an entire family supposedly visible in both of her pupils. For believers, the images are reflections of what Guadalupe saw when she appeared almost five centuries ago to St. Juan Diego.

10. The tilma upon which the Virgin's image is imprinted is held to be miraculous by devotees.
Some scientists claim an absence of brush strokes on the cloak while others report that the coloration contains no animal or mineral elements. Perhaps the most spectacular miracle, according to devotees, is the tilma emerging unscathed from a bomb blast.

In 1921 an anti-clerical radical detonated 29 sticks of dynamite in a pot of roses beneath the cloak. The blast destroyed a marble rail, twisted a metal crucifix and shattered windows throughout the old basilica but the tilma itself was untouched.

(Andrew Chesnut is a professor of religious studies and holds the Bishop Walter F. Sullivan Chair in Catholic Studies at Virginia Commonwealth University)

Andrew Chesnut is a professor of religious studies and holds the Bishop Walter F. Sullivan Chair in Catholic Studies at Virginia Commonwealth University.

Show Comments (
3
)
Comments are automatically closed two weeks after an article's initial publication. See our comments policy for more.
JR Cosgrove
4 years 6 months ago
My wife and I visited the Cathedral at Turin in 1999 to see the Shroud. We had done a fair amount of reading on it prior to going there. This also included reading about another image, the painting of Our Lady of Guadeloupe. We saw this painting when we visited Guadeloupe a couple years after going to Turin. From what I remember, the material on which the painting is imprinted is common cloth of the 1500's but it somehow amazing remains unaffected by 500 years of existence. Maybe t he author could be contacted and could spend more time on this as to what is the common consensus of this material. He refers to it in his last point. Today is a big deal in parts of Mexico as tens of thousands make a difficult pilgrimage to the Guadeloupe shrine.
Bruce Snowden
4 years 6 months ago
I have always accepted Guadalupe’s Tilma as confirmation of the miraculous nature of Blessed Virgin’s apparition to Juan Diego. Now I learn by reading, “Ten Things To Know About The Virgin Of Guadalupe,” that Juan Diego to whom the Virgin is said to have appeared, may have never existed! How can the Church canonize a non-existing person and still claim that canonization is “ex cathedra” and as such an infallible action by the Pope, declaring that the canonized person is definitively in the presence of God in heaven? Is Juan Diego, like what some claim OT’s Job is, simply a conglomerate of humanity in good and bad times with a spiritually useful message, Juan Diego a Mexican-people conglomerate? I tend to doubt that, but being a person who believes in resurrection of the dead, maybe I shouldn’t doubt the non-existence of Juan Diego and retain faith in the Guadalupe story. I do believe in the miraculous origin of the Guadalupe story, a real event designed by God to enliven Faith, baffling to non-believers and other modern day Voltaires, who proudly asserted that, even if he saw a miracle happen, he would not believe! Regarding the image on the Tilma, for about thirty years from 1950-1980 ophthalmologists studied the eyes by way of infrared photography, a computer too, to photograph the Virgin’s eyes, amplifying them. Human figures were discovered in the eyes of Our Lady of Guadalupe. The figures were in both eyes at the exact positions required by laws of optics and two-eyed physiology. Investigating this incredible fact, Dr. Jose Aste-Tonsmann, a computer engineer used a method called, “digitalization.” I quote as follows, “This photo enhancing involved the assignment of numerical equivalents to originally qualitative values, and the resulting printout allows evaluation of images too small to be interpreted visually. Upon such close examination it is almost as if when Our Lady of Guadalupe appeared, she took a picture of the people who were before her.” Enough said perhaps and so much more to be said. If interested see the December 1994 issue of Catholic Digest, re: “The Face Of Our Lady Of Guadalupe” by Jeanette Rodriquez, condensed from, “Our Lady Of Guadalupe.” Incidentally some claim that the same source that produced the image on the Shroud of Turin, is responsible for producing the Tilma image. That source is thought to possibly be nuclear fission, imaged as were leaves and other objects on walls in Hieroshima, following the Atomic Bombing! Interesting, isn’t it?
john andrechak
4 years 6 months ago
I love it, Christopher Columbus, slave trader, rapist, murderer, was an avid follower of Mary of Guadalupe, saved his fleet so he could continue to practice geocode; now there is an endorsement; people wonder why there is such hatred towards our Church