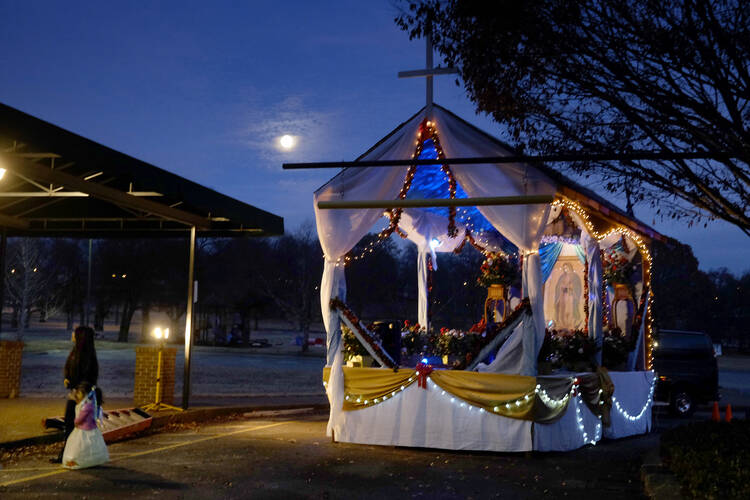 A full moon rises behind an outdoor shrine to Our Lady of Guadalupe at Sagrado Corazon at the Catholic Pastoral Center in Nashville, Tenn. (CNS photo/Rick Musacchio, Tennessee Register)

Father Malone is on pilgrimage in Rome with America Media.

The nation has changed, once again. This time we are becoming more Latino. The demographic shift is not the future; it is the present. Nowhere is this clearer than in the church, where Hispanics account for more than 71 percent of the growth since 1960.

Hosffman Ospino, associate professor of Hispanic ministry and religious education at Boston College, unpacks the numbers in this week’s issue, diving deep into how Hispanics are changing the United States and forming a new geographical center for U.S. Catholicism. The majority of U.S. Catholics now live in the South and West, largely because of emerging Hispanic and Asian communities.

Hispanics are changing the United States and forming a new geographical center for U.S. Catholicism.

Mr. Ospino served as principal investigator for the “National Study of Catholic Parishes With Hispanic Ministry,” which was led by Boston College in collaboration with the Center for Research in the Apostolate (CARA) at Georgetown University. “Rapid demographic changes along with the fear of the unknown seem to explain some of the anxiety that invades the hearts of many Catholics in the United States today,” he writes. “The best remedy to address such anxiety is to know more about each other.”

Thanks to a two-year grant from a private family foundation, America Media will make those introductions, fostering meaningful conversations about the future sustainability and growth of the U.S. Catholic Church. That conversation will give special attention to Hispanic Catholics in church life. We will organize town halls, publish a special issue, produce videos and give greater emphasis to Hispanic-related issues in print, online and on air. Coverage will center on three key topics: criminal justice reform, Hispanics in Catholic education and immigration.

Immigration has split contemporary society like few other issues. Despite constant efforts from advocates, comprehensive immigration reform is still but a dream. The U.S bishops recognize that sovereign nations have a right to protect their borders, but they have also underscored the right of individuals and families to migrate to sustain their lives. Yet the emerging Hispanic church is not simply a matter of immigration. Mr. Ospino notes that two-thirds of the nation’s Hispanic Catholics were born in the United States. Their needs are not the same as those of their immigrant parents. Not all Hispanics are the same.

I was born in the Dominican Republic. My mother is Dominican, but my father is from Chicago. Bilingual and bicultural Latinos, like me, are yet another dimension in the U.S. Hispanic milieu. Most of us actually identify ourselves by our nation of origin rather than with the umbrella terms “Hispanic” or “Latino.”

While most continue to be Catholic, the percentage of U.S. Hispanics who are Catholic continues to drop.

Bilingual billboards and Super Bowl ads demonstrate that businesses know who their future customers will be. Capitalism and culture collide, and the meaning of our traditions is often lost. While most continue to be Catholic, the percentage of U.S. Hispanics who are Catholic continues to drop.

The church is struggling to keep up. While 55 percent of school-age Catholic children are Hispanic, only 4 percent of them are enrolled in Catholic schools. It gets only a little better at Catholic university and colleges, where 11 percent of students are Hispanic, according to Mr. Ospino.

The changing demographics have no doubt fueled a new nativism. But we can overcome such barriers. Toward that end, America Media will also partner with the Fifth National Encuentro of Hispanic/Latino Ministry, a four-year process of ecclesial reflection, consultation and evangelization. It will help to identify and plan for pastoral priorities and to bridge divisions.

My family moved from the Caribbean to the United States when I was a child. “I’m moving to America,” I told my neighbors in their backyard. My friend’s sister laughed at me. “You’re in America,” Eli said. I was puzzled. “You’re in North America. And then there’s also South America. But it’s all America.” Little did I know she was preparing me for a papal teaching.

St. John Paul II, in his 1999 post-synodal apostolic exhortation, “The Church in America,” spoke of America as a single continent. An encounter with the Lord, he said, would lead us down “a path of conversion, communion and solidarity.” Pope Francis has not ceased to challenge us to live a culture of encounter.

"How good it is to encounter one another in this place, where we see one another as brothers and sisters."

In America, we are all brothers and sisters and we need each other. Our ancestors come from every nation on earth, and our unique cultures come together to form new ones. We must overcome our fears through encounters with each other.

Thanks for the continued coverage on immigrants and the Latino population with this interesting article. I agree that dialogue is a critical step in building a relationship. Unfortunately, the tone the Mr. Ospino lays out is a dialogue in a Us vs. Them framework. It makes it seem as if the best way to make “us” feel less apprehensive about “them” (meaning these foreign folks) is to engage in dialogue yet he doesn't clearly lay out factors that contribute to the situation such as class and race. Lines like “Rapid demographic changes along with the fear of the unknown seem to explain some of the anxiety that invades the hearts of many Catholics in the United States today,” and using words like “Invades” doesn’t help. I hope Mr. Ospino would come to realize that this type of language reinforces negative attitudes about immigrants as invading hoards that must now be tolerated to be better understood.

We must all do a better job of talking about the moment in which we find ourselves not primarily as a question of economic or statistical gain but a critical point for us as a church to embrace the Gospel. The word of God gives not only guidance, but a direct command to love our neighbor which is much more than a matter of practical adaptability. The idea that the majority population just needs to get use to and tolerate immigrants falls short when not coupled with calling out those who are unwelcoming as spiritually wrong.