Las Posadas: a Mexican tradition keeps Christ (and Mary and Joseph) in Christmas 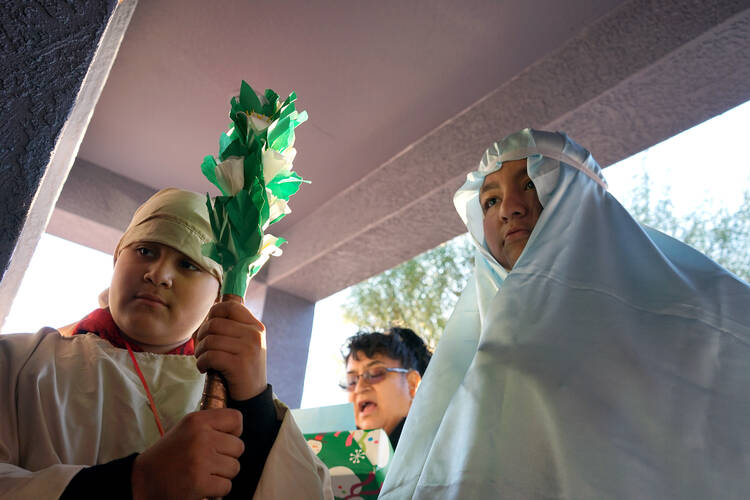 Mary and Joseph were running just a couple of minutes late yesterday afternoon. Children, parents and grandparents of many families gathered on 125th Avenue in front of one of their neighbor’s homes to celebrate Las Posadas.

“This is a tradition that we’ve celebrated since we were children in Mexico,” said Maria Ramirez, one of the coordinators of Las Posadas for St. John Vianney Church in Goodyear, Ariz.

Mary and Joseph were running just a couple of minutes late yesterday afternoon.

“It brings the barrio together. Almost everyone in the neighborhood participates,” she said, noting most participants immigrated from Mexico. “This is something we want to hand down to our children.”

Las Posadas, literally “the inns,” is a reenactment of the Holy Family’s search for lodging in Bethlehem before the birth of Christ. Typically, two children will play the role of Mary and Joseph, a few others will play innkeepers and the rest will accompany the group as they process from one house to the next. If children take the roles, participants will carry statues of Mary and Joseph for the reenactment.

“I’m honored to do this for my family,” she said as she adjusted her blue mantle. “Most of my cousins are embarrassed. But I’m down with it. I’m proud of my faith.”

Breyda has played Mary before. She said that participating in Las Posadas helps her understand what the Blessed Mother went through before giving birth to Jesus. Bernye Santillán, 11, who played St. Joseph, did not offer much in response to questions. Perhaps that is because he was in character.

“I’m honored to do this for my family. Most of my cousins are embarrassed. But I’m down with it. I’m proud of my faith.”

The St. John Vianney group prayed decades of the rosary, meditating on the Luminous Mysteries, before breaking out into the traditional songs of Las Posadas at each house. The three stops of the reenactment were relatively close to each other, so the procession of about 50 walked slowly.

During the reenactments, the group outside asks for lodging, or “posada,” and the group inside rejects them at each stop. Until, of course, the reenactment arrives at the final house where Mary and Joseph are welcomed inside.

All the same songs are sung, back and forth, but then the group playing the innkeepers sing lines: “Wait, it is you Joseph, and your wife, Mary! Please come in, I did not recognize you!”

To this, the group outside sings, “God will repay you for your charity and fill you with blessings in heaven.”

Once the pilgrims are welcomed, the celebration truly begins.

“We are experts at celebrating,” Cristofer Pereyra, director of the Hispanic Mission Office of the Diocese of Phoenix, said of the Latino community.

Once the pilgrims are welcomed, the celebration truly begins.

Las Posadas celebrations will typically include Mexican sweet bread, a hot chocolate drink called champurrado and menudo. At the Goodyear celebration yesterday, they shared pozole, a traditional Mexican stew, along with hot chocolate and nachos, which are admittedly not traditional.

“You know, not all the children like pozole,” said Ms. Ramirez, stressing the need to involve the next generation. “Kids don’t always like spicy foods, so we have nachos.”

During evening celebrations, participants often carry candles. “The children love that. It’s the one chance they have to play with fire every year,” Mr. Pereyra quipped.

Las Posadas, with its series of chants and prayers, is a tradition that is clearly Christian. It reminds believers that the very first Christmas was a humble one, Mr. Pereyra said, and it was not about the amount of money spent.

“Christmas is about receiving God made flesh. Las Posadas is a path away from the commercialization of Christmas,” he said, adding that it could be celebrated by various cultures. “I wouldn’t be surprised if we start seeing Las Posadas celebrated in the English-language.”

“Las Posadas is a path away from the commercialization of Christmas.”

Maria Muñoz-Visoso, executive director for U.S bishops’ Secretariat for Cultural Diversity in the Church, has experienced people “from all over the world” celebrating Las Posadas at her parish, St. Camillus in Silver Spring, Md. The story connects with people on the move.

“Mary was very much pregnant, but she and Joseph were forced to make this journey because of the census. Joseph had to return to his birthplace to get registered,” she said. “The inn is full, no one is welcoming them, even in Mary’s state.”

But someone finally does take pity on them and allows them to stay, albeit with the animals. They stay for a time, receive visitors, but then have to flee persecution.

“Mary, Joseph and Jesus are trying to find a place in our heart. Are we open to them?”

“For us, Las Posadas is a journey of faith,” Ms. Muñoz-Visoso said. “Mary, Joseph and Jesus are trying to find a place in our heart. Are we open to them?”

“They know what it is to be persecuted for no fault of their own. And they also know the journey is about protecting life,” Ms. Muñoz-Visoso said. “When Mary and Joseph flee, they are protecting their most precious gift, the child Jesus. They do whatever it takes to protect him.”

For migrants and refugees fleeing violence, Las Posadas is their life.

In Goodyear, traditional Mexican dancers, called matachines, joined the celebration at the final house. Matachines dance in honor of Our Lady of Guadalupe. After the dancing, Breyda Navarro-Vargas, who played Mary, climbed on top the roof to swing the piñata.

Children lined up, smallest to biggest, with a decorated wooden stick. The time allowed for each child shrank in proportion to their size. The parents wanted all the children to get a swing.

A Christmas prayer for (nearly) everyone
James Martin, S.J.

“We have families from all over the neighborhood who are welcomed at our homes,” said Baltazar Ramírez, who co-hosted the celebration with his wife, María. “We come together, as brothers and sisters, like a family. We eat together...we eat tamales. It’s where differences disappear. Jesus sees us all the same.”

And with any luck, more people will join the celebration in the United States.

“This is a way of evangelizing people. It really is a witness,” Ms. Muñoz-Visoso said. “People go through the streets. They’re singing about Jesus’ birth and Jesus’ coming. It’s a witness of faith.”