This Christmas, unwrap a tamale 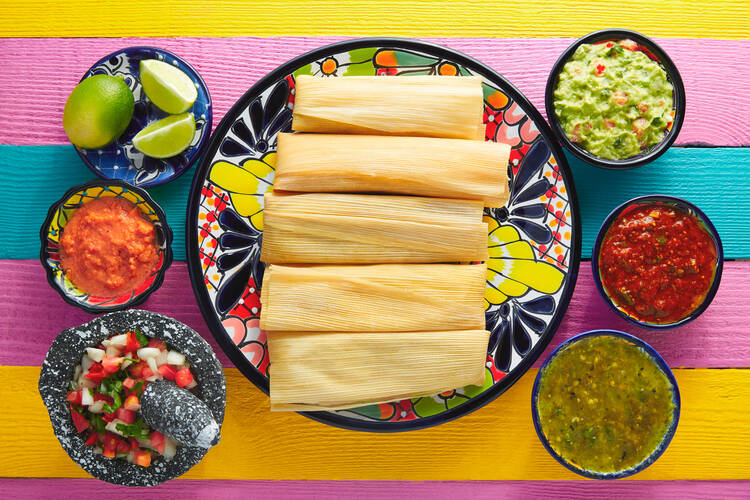 December often brings with it memories of the Christmases of our childhood days. Waking up early to play in the snow, with the promise of hot cocoa afterward. Hallmark Christmas movie marathons in your pajamas. Chestnuts roasting on an open fire while Jack Frost nips at your nose. For me, however, Christmas was none of those things.

Growing up in a Mexican-American household in the southern United States, we didn’t have snow days, and the coldest it ever got was a chilly 60 degrees. What we did have were tamales. Lots and lots of tamales. Tamales for days.

Tamales are a traditional Mesoamerican dish made out of corn husks and masa harina (corn flour), filled with a variety of meats, cheese or fruits. We spread the masa on the corn husks and fill it with our ingredients of choice. (The term “tamale” comes from the aztec word tamalli, which means wrapped.) While many people associate tamales with Mexico, many Latin American countries have their own variation of tamales, often with banana leaves instead of corn husks.

Growing up in a Mexican-American household in the southern United States, we didn’t have snow days. What we did have were tamales.

Once the tamale has been spread and filled, we carefully wrap the tamale with the corn husks and place it in a giant steaming pot, where the tamales steamed to perfection.

As children, our noses would tell us it was tamale time before we knew it was tamale time. The house would fill with the stench of what we could only assume was the spiciest of chilies as they roasted on the stove, overwhelming everyone in the house with coughing fits and stinging eyes—even worse than chopped onions.

The roasted chiles would wake us up, and from there we had the routine down pat. Get out of bed, wash our hands and scurry into the kitchen to find that mama, abuelita, tias (aunts) and primas (cousins) had already gathered and were preparing for the endurance test that was tamale-making.

Tamale time was always a marathon of a day. We would spend hour after hour after hour in an assembly line: spreading, filling, wrapping; rinse and repeat. After placing the tamales in the casuela (pot) for what felt like days, they would finally come out, piping hot and ready to be eaten or transported to my grandma’s house for the Noche Buena (Christmas Eve) festivities. In reality, the tamales steamed for two hours tops, but to my young mind, it felt like an eternity. While many kids anxiously waited for Santa Claus, my cousins and I anxiously waited for the tamales to be ready.

Tamales always symbolized the holidays, what it means to be family, getting together and sharing good company in the best place and in the best way we know how—in the kitchen. It was a family affair. If we could drag a dad or uncle into the cooking mix, even better. There was no better time to hear stories of our parents’ days in Mexico and their childhoods, of what Christmas time meant for our parents and grandparents before we were even born.

In Aztec and Mayan civilizations, tamales were made because it was easy, portable food. They would use tamales to feed armies or bring them along when they went hunting. It is easy to see how over time, tamales have become customary at large gatherings and celebrations. And there is no time more special for Mexicans than the period that ranges from the Feast of Our Lady of Guadalupe to the end of the Christmas season, on the Feast of the Epiphany. We love food, family, Mary and baby Jesus.

At my grandma’s house, we place the casuelas of tamales near my grandma’s enormous nativity. We spend the rest of Christmas Eve eating and chatting, playing games and passing the time until midnight, when the entire family gathers near the nativity, where we welcome baby Jesus into his home for the next year with stories, songs, merriment and a birthday kiss.

Tamale season is just beginning. I hope you find a tamale sitting atop your table so you can unwrap more than just Christmas gifts this season.

Next Christmas article: buñuelos! I remember the tamaladas growing up here in San Antonio. My grandfather would purchase new ice chests that were sparking clean. The masa was made in those with brand new broom handles to stir! There were seven children plus their spouses and children to feed: 34 children in all!! And each household brought the filling already prepared! Pork, chicken, Bean and cheese, venison, with a variety of spices. For dinner, platters with some of each were prepared, and we ate buffet style. And each family took so many home, leaving dozens for Christmas Day... On Christmas, we'd meet back at my grandparents where our grandmother would allow those of us old enough to help prepare the buñuelos. I remember dropping the dough in the hot grease. The cinnamon sugar was sprinkled on top and they were eaten as fast as they were cooked!

Nowadays, I purchase my tamales and buñuelos already made. And here in San Antonio, HEB, our local grocery store actually sells their own! Tamaladas still happen everywhere, but the convenience allows us 2nd and 3rd generation Americans the luxury to enjoy the traditional foods and still share those stories over Christmas Eve and Christmas Day.

Wonderful! Have you read the children's Christmas book, Too Many Tamales? My students always enjoyed it.

This brings back memories! I’d like to add that in southern Mexico, tamales are made with banana leaves in areas with high indigenous populations like Oaxaca and Yucatán.,

Also, and this is the purist in me, plural is tamales, singular is tamal.

Would love to have recipes!

Here in New Mexico we have similar traditions. For instance we have sopaipillas or "sopas" for short. They're called Navajo fry bread on the reservation where the treat originated. Some people humorously called them "so-pie-pillows" because they fry up into air-filled pastries that are frequently eaten with honey for dessert.

Posole (looks like hominy but tastes nothing like it) with beef or pork and sometimes pigs feet or menudo (tripe) and spiced with red chile is a standard New Mexico Christmas dish.

Biscochitos (a kind of sugar cookie with anise seeds) and empanaditas (small turnovers filled with fruit, like pumpkin, or venison mincemeat) satisfy the New Mexican sweet tooth. Rather than chestnuts, New Mexicans eat small roasted piñon (pine) nuts. Piñon trees only produce nuts every several years so they've become expensive, especially for those of us hooked on them and skilled at cracking and eating the small nut.

I was gone from N.M. for over 35 years and really missed the food. I went to a New Mexican style restaurant near D.C. once and saw on my way in that all the cooks were blonde. Uh-oh, I thought. The place wasn't open long. Now I'm back in heaven food wise although a former territorial Governor once quipped, "Poor New Mexico, so far from heaven and so close to Texas." :)

I am played this solitaire online free when i am bored from my continuously work and it will be more help to relax the mind you will definitely enjoyed the latest version of this game.