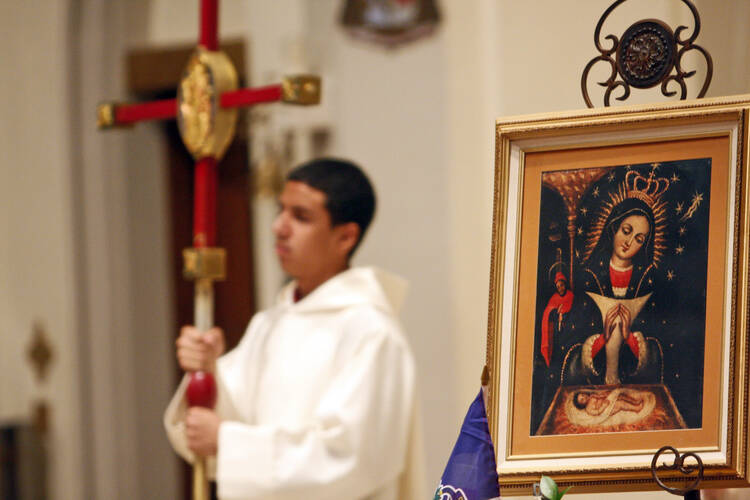 Cross-bearer Linardy Loveras processes near an image of Mary during a special Mass marking the feast of Our Lady of Altagracia at St. Agnes Cathedral in Rockville Centre, N.Y., Jan. 24, 2009. (CNS photo/Gregory A. Shemitz, Long Island Catholic)

Avocados, plantains and yucca. Those all made sense. But the oranges perplexed her.

Elizabeth Muñoz Johnston, who came to the United States when she was 3, was attending an annual celebration of Our Lady of Altagracia, a devotion popular in the Dominican Republic. Her fellow parishioners presented typical Dominican foods during the offering at Mass.

“Why are the oranges there?” The question inspired Ms. Johnston, the coordinator of catechesis and evangelization at St. Frances Cabrini Church in Rochester, N.Y., to look deeper into the Marian devotion that meant so much to her.

Avocados, plantains and yucca. Those all made sense. But the oranges perplexed her.

In Brooklyn, where she grew up surrounded by other Dominicans, the churches were covered with various images of Mary. But the homes of her mother, grandmother and neighbors all had the same image: Our Lady of Altagracia. Her mother led family rosaries in front of the centuries-old image, which depicts the Holy Family shortly after the birth of Jesus.

Our Lady of Altagracia, whose feast is celebrated on Jan. 21, always reminds Ms. Johnston of her home country. But she did not fully understand the devotion until she started helping with the Rochester celebration 20 years ago.

According to tradition, there was a 16th-century merchant who always brought his daughter back a gift from his travels. One day, the merchant’s daughter asked him to bring her a specific image of the Blessed Mother from her dreams.

Our Lady of Altagracia, whose feast is celebrated on Jan. 21, always reminds Ms. Johnston of her home country.

After failing to find such an image, the merchant shared his troubles at an inn where he stayed on his way home to Higüey in modern-day Dominican Republic. An elderly, long-bearded man overheard the story, unfurled the 13-by-18-inch image of Our Lady of Altagracia, or “Our Lady of High Grace,” and gave it to the merchant.

After the merchant had brought the image to his daughter, it vanished overnight and reappeared in an orange tree grove. They brought it back to their home, but according to legend, this continued to happen until a church was built for the image in the orange grove. And that is why oranges were part of the offering during that Rochester celebration 20 years ago, Ms. Johnston said.

“She is, to us, the Dominican Republic,” she said of Our Lady of Altagracia, adding that more than 200 people attend the annual Rochester celebration. “Even though it’s freezing cold, they still show up.”

“She is, to us, the Dominican Republic,” Ms. Johnston said of Our Lady of Altagracia

Notwithstanding tradition, the image was more than likely painted in Spain near the end of the 15th or beginning of the 16th century. Two brothers, Alonso and Antonio Trejo, brought the image to the Caribbean island in 1502.

The image hung in St. Dionysus Church from 1571 until it was moved to the modern-day Basilica of Our Lady of Altagracia in 1970. More than 800,000 pilgrims visit the basilica annually, according to some estimates.

“The night before her feast day, buses leave here full of pilgrims,” said Juan Mata Almonte, a rice farmer in Mao, a rural town in northern Dominican Republic. Pilgrims make penance or give thanks for blessings received, he said, noting that some believe they have been cured of cancer through the intercession of the Blessed Mother.

The evening before the Jan. 21 feast day, his town lights up with celebrations that last until the sunrise. Mr. Mata said the devotion was akin to that of Our Lady of Guadalupe in Mexico.

“Here, we are devoted to the Virgin of Altagracia,” Mr. Mata said in an interview with America. “We need to grow more in our devotion to her so that there will be less violence, fewer deaths. She’s our mother. She will protect us.”

According to José Guerrero, a historian at Universidad Autónoma de Santo Domingo, Our Lady of Altagracia used to be less popular than Our Lady of las Mercedes, or “Our Lady of Mercy.”

“We need to grow more in our devotion to her so that there will be less violence, fewer deaths. She’s our mother. She will protect us.”

Our Lady of Mercy, a devotion with origins in Spain, came to be associated with the colonialists. Devotion to her was common throughout the New World. The Spanish military would hoist banners with her likeness as they charged into battle, Mr. Guerrero said. A shift toward a devotion to Our Lady of Altagracia began with Dominican independence on Feb. 27, 1844, though Our Lady of Mercy was declared the patroness of the Dominican Republic the same year.

“Some believe Juan Pablo Duarte [a founding father of the Dominican Republic] took the colors of our flag from Our Lady of Altagracia, but that is unlikely,” Mr. Guerrero said. “It is more likely that it is simply a white cross over the colors of the French flag.”

Whatever the case, Mr. Guerrero said Our Lady of Altagracia grew to become the patroness of the state, of the people and also of Haitian Catholics.

“Our country is so important to us. We carry the Dominican Republic in our hearts.”

As she spoke with America, Ms. Johnston looked upon the image of Our Lady of Altagracia that will be used for this year’s celebration. It had been placed in her office at St. Frances Cabrini in Rochester.

“One of the things that really speaks to me when I see her, especially when I go to New York [City] to visit family and I see her in a church, it’s like being home because she’s there,” Ms. Johnston said. “Anytime I see things with her image, I stop. It attracts me just to look at her. It fills me up spiritually.”

The image depicts the Holy Family, and that resonates with Ms. Johnston because family is important to her. She is one of seven, and her parents have more than 10 siblings each. She noted how the Blessed Mother looks down at Baby Jesus “with beautiful tenderness.”

The Dominican motto is Dios, Patria, Libertad, “God, Homeland, Liberty,” and the Dominican Republic is the only country to have the Bible on its flag. That makes sense to Ms. Johnston, whose faith is inseparable from who she is as a Dominican.

Hmm...given the fact that the Dominican Republic has one of the highest rates of femicides(murder of women)in the world, one has to wonder about the efficacy of these devotions...Anyone? 😎