‘Laudato Si’’ calls us to ecological conversion. What does that look like? 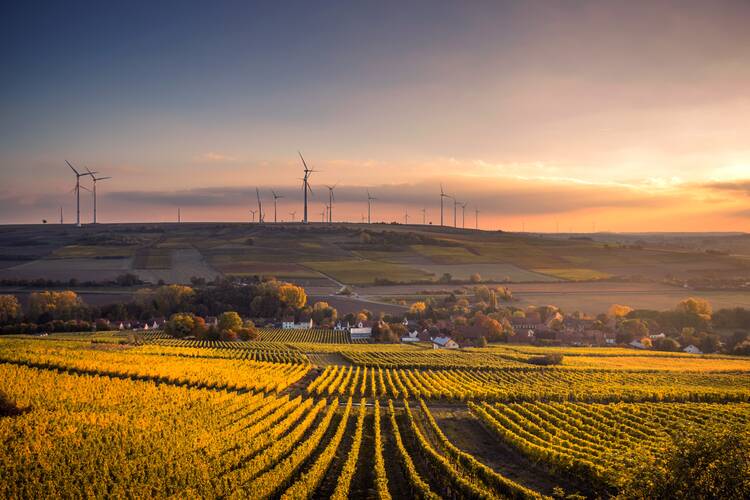 “The ecological crisis is also a summons to profound interior conversion,” Pope Francis writes in 'Laudato Si'. Photo from Unsplash.

Brenna Cussen Anglada recalls a visitor to Wisconsin’s St. Isidore Catholic Worker Farm who arrived believing that nature would be better off without humans. “At the end of the summer,” Ms. Cussen Anglada says, “she realized not only that she loved nature but that nature loved her.” This visitor’s time at the Catholic Worker farm helped her realize that solutions to the environmental crisis were not only about eliminating problems but restoring relationships.

This is precisely what Pope Francis exhorted the church to in “Laudato Si’.” The encyclical, published four years ago this week, was a call to more than eliminating plastic water bottles, using public transportation or advocating for the Paris climate agreement. “The ecological crisis is also a summons to profound interior conversion,” Pope Francis writes. Rather than “ridiculing expressions of concern for the environment,” he says, Christians need “an ecological conversion.”

Various Catholic groups are answering that call from “Laudato Si’” as they try to help people close a gap between the spiritual life and ecological awareness.

The pope makes clear that the work for climate justice cannot be rooted in ideology.

Christin Tomy, O.P., manages a 1.5-acre farm on her motherhouse’s property in Wisconsin. She runs a farmer training program and leads retreats on caring for creation. Sister Tomy understands ecological conversion as “a summons to fall in love again with the other-than-human world. We can talk about policy, but we are only motivated to care for what we know and love.”

The pope makes clear that the work for climate justice cannot be rooted in ideology. Francis writes, “Rather than a problem to be solved, the world is a joyful mystery to be contemplated with gladness and praise.”

Sister Tomy finds that passage especially moving and tries to help people do just that when she leads retreats. This includes inviting people to pray outdoors and leading contemplative practices like naming the colors one can see as they look around outside. For many people, she says, “their primary connection to the natural world is eating,” but ecological conversion calls for something much deeper.

Marcus Page-Collonge, who lives and works at Earth Abides Catholic Worker Farm in California, says that unlike our ancestors, many people today are not aware of their dependence on the natural world. He sees this compounded by an unhealthy relationship with technology. “For those like me who didn’t grow up with that inherent sensibility, that is the conversion that I am hearing, that I am believing, that I am agreeing with in ‘Laudato Si’,’” he says—the need to become more attentive to the natural world.

Ms. Cussen Anglada and her husband Eric Anglada of St. Isidore Catholic Worker Farm in Cuba City, Wis., are also conscious that environmental protection is about more than just advocacy. Mr. Anglada points to the words of Pope Benedict XVI, quoted in “Laudato Si’”: “The external deserts in the world are growing because the internal deserts have become so vast.”

This connection between the spiritual life and an ecological awareness has not always been well understood within the Christian tradition. “Admittedly,” Pope Francis writes, “Christians have not always appropriated and developed the spiritual treasures bestowed by God upon the Church, where the life of the spirit is not dissociated from the body or from nature or from worldly realities, but lived in and with them, in communion with all that surrounds us.”

The retreats that the Angladas lead at St. Isidore’s help people return to this part of the tradition. Their “Growing Roots Discussion” program welcomes people to four-day workshops at their farm that combine prayer, manual labor on the land and conversations about living in greater community with one another.

“Sunday...is meant to be a day which heals our relationships with God, with ourselves, with others and with the world,” Pope Francis says.

“When people come to the farm,” Ms. Cussen Anglada says, “they are so delighted to do things like milk a cow...and then drink that milk.” Marcus Page-Collonge sees something similar at Earth Abides Catholic Worker Farm in Mountain Ranch, Calif.

Earth Abides offers retreats, specifically for people with HIV/AIDS, where folks can work the land, pick and juice apples in the fall, weed, plant seeds and weave alpaca wool, all in the midst of prayer. “It’s wonderful to be able to facilitate those experiences for people who may not have had them,” he says.

In “Laudato Si’,” Pope Francis holds up St. John of the Cross, who felt God “eminently and infinitely” in all aspects of reality. “This is not because the finite things of this world are really divine,” he writes, “but because the mystic experiences the intimate connection between God and all beings.” Programs like those run by Sister Tomy and the Catholic Workers are helping people recover a sensibility like that of St. John of the Cross, which helps them to pray not only in creation “but with creation,” Mr. Anglada says.

Ecological conversion entails bridging the gap between the sacramental life and environmental awareness.

In “Laudato Si’,” Francis echoes this realization: “The sacraments are a privileged way in which nature is taken up by God to become a means of mediating supernatural life.”

The pope asks that the sacraments inform our approach to issues facing the planet today. He suggests a renewed understanding of the Eucharist and recovery of the celebration of a day of rest.

Every Sunday, participation in the Eucharist can call forth in the church a deeper care and attention to creation as it is consecrated and reverenced. “Sunday...is meant to be a day which heals our relationships with God, with ourselves, with others and with the world,” Pope Francis says.

Approaching Sunday with a deeper sense of rest and contemplation can help cultivate the interior conversion called for by Pope Francis. “We tend to demean contemplative rest as something unproductive and unnecessary,” he says. “[But] rest opens our eyes to the larger picture and gives us renewed sensitivity to the rights of others...and motivates us to greater concern for nature and the poor.”

Sister Tomy has found that working the land has also brought about a sense of patience and rest. “It is easy to superimpose our Western sense of productivity onto growing food,” she says. The adoption of practices that encourage patience, rest and gratitude are important to remember. For this, she has learned a lot from indigenous communities that first cultivated the land in the area she now lives.

For practical ways that Catholics can adopt this ecological conversion, aside from monitoring what products they use and advocating for climate protection, these Catholic farmers would simply encourage spending more time outdoors, praying more and finding time to intentionally give thanks for the gifts of the earth. “Consider moments of joyful mystery,” says Sister Tomy, and pay attention to when you were “blown away with wonder and awe.”

Recognizing these moments, we can move to an ecological mysticism that Pope Francis describes, where “standing awestruck before a mountain, [the mystic] cannot separate this experience from God and perceives that the interior awe being lived has to be entrusted to the Lord.”

These Catholic farmers know there is much work to be done to cultivate this conversion within the church. Nevertheless, they will continue walking with groups to answer the challenge “Laudato Si’” posed four years ago, “whereby the effects of their encounter with Jesus Christ become evident in their relationship with the world around them.”

William Critchley-Menor, S.J. is studying Philosophy and American Studies at St. Louis University. He is a member of the Midwest Province of the Society of Jesus and is a summer Intern at America Media.

In another article on this webpage it pointed out how bad some encyclicals are. Is Laudato Si another bad encyclical?

Shades of Galileo Galilei! I wish Pope Francis would leave the science of global warming or climate change to the scientists, not to theologians.

What arrogance has taken possession of us weak little creatures on this mortal coil, to make us think that we tiny ants can change the weather on this huge planet. We forget that glowing star out there that we fondly call the SUN, which from time immemorial has been sending us its powerful rays, its warmth, and its energy. We forget the powerful forces in the very belly of our magnificent planet, a planet we think we can tame. We’re just acting like little gods.

But that’s all ecology. Let’s leave our children an even more beautiful and healthy planet than the one we inherited. Let’s not try to change the climate of this temperamental Planet Earth. Let’s enjoy and indeed beautify this magnificent home of ours, lost among the trillions of other planets and stars. Ecology has nothing to do with global warming or climate change, which is the greatest scientific fraud ever perpetrated on mankind.