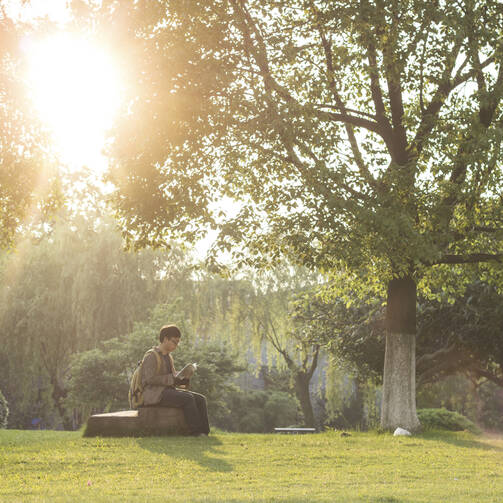 It was a simple assignment: Observe a tree on campus in silence for 10 to 15 minutes each week of the semester. Still, the requirement was initially met with skepticism by some of my colleagues and students as a hokey, hardly academically rigorous, “tree-hugging” activity.

And yet the natural world has a subtle power and attraction to draw even the reluctant observer into a realm of wonder—which can ultimately lead to an awareness of God’s existence and immanent presence in something as unnoticed as a tree.

Pope Francis identifies our current ecological crisis as a “summons to profound interior conversion.” Christians, he writes, need an “‘ecological conversion,’ whereby the effects of their encounter with Jesus Christ become evident in their relationship with the world around them” (“Laudato Si’,” No. 217). How might this summons be heard and acted on by contemporary Catholics and Christians? Pope Francis seeks to draw the church and the human family to rediscover God as Creator, the natural world as creation and the single divine economy of creation and redemption in which we participate. Resistance to Pope Francis’ encyclical on ecology and the environment, “Laudato Si’,” reflects the centuries-long diminution of Catholic awareness about God as Creator and our relationship to creation.

With the advent of the Enlightenment, nature was abandoned to the hands of the scientists while theologians limited their domain to salvation history. Theology for the past several centuries has overlooked the first article of the Creed, which centers on creation, in favor of the second article, with its anthropocentric focus on redemption in Jesus Christ. “Laudato Si’” attempts to reunite creation and redemption as two necessary foci in a single divine economy of love. Francis writes that a “spirituality which forgets God as all-powerful and Creator is not acceptable” (No. 75). The incarnate Word, Jesus Christ, has a relationship not just to humankind but a prior relationship and mission to the entire cosmos, for in and through the Word, all things in heaven and earth are created.

A conversion of hearts and minds is needed. I have found that a guided encounter with the natural world equips students to be “auditors” who hear the Word of God in and through creation and are then disposed to respond to that Word as a summons to new relationships with God, oneself, others and the natural world.

I teach a course called “Science, Theology, and Creation” at the University of Notre Dame. Readings and lectures immerse students in a theological investigation of who God is as Creator, what creation is and what the identity and vocation of the human person is in relation to God and creation. The principles learned are then applied to three contemporary areas of study: cosmology, evolution and ecology.

First, many students must be weaned of a notion of God as another being in the universe who is just the most powerful one of all. God, who is being itself (ipsum esse subsistens), can only be understood analogously. In the taxonomic list of everything that exists in the universe, God is not one more thing. Unlike all creatures whose existence is not proper to their essence, God’s essence is his existence. If human nature is to be a rational animal, then God’s nature is to be “to-be.”

Second, creation must be understood not merely as a scientific category but a philosophical and theological one. Creation depends upon God for existence. God creates out of no compulsion or necessity but out of freedom, love and generosity. Creation is not a temporal event that happened at some time in the past and then left to unfold. Rather God creates out of nothing (creatioex nihilo) and continues to create (creatio continua), that is, holds everything in being. God is both transcendent, the divine source of all who is not in the universe of space and time, and immanent, present in each thing as the cause of its existence. Thus, the Christian understanding of God must be contrasted with deism (God is transcendent but not immanent) and pantheism (God is all immanence without transcendence).

Third, students must expand their primarily scientific worldview to think philosophically and theologically. Scientific knowledge is indeed a worldly wisdom about particular aspects of nature, but philosophical and more so theological wisdom move beyond the particular to a consideration of the whole of reality and its causes. Philosophical understanding enables one to see with a new vision the transcendent and even the divine. But this falls short of theological wisdom, which sees with a Christological vision, for Jesus Christ is the Word and Wisdom of God through whom the universe and everything in it comes into being.

For students to learn what creation is, they should be out in it. Thus, the lab component to the course is necessary and integral. At the same time each week students visit a place they have picked on campus that is home to a sizable tree. They keep a notebook recording their observations of the weather conditions, azimuth and zenith of the sun and anything they perceive with their senses. They also record their insights about the process itself.

Many initial encounters with the tree are scientific in nature, but as the semester progresses, students, equipped with new philosophical and theological awareness, begin to see with new eyes. Having learned that the Logos or Word of God is the formal cause of creation, such that all things come into being in and through the logos, they can see each creature not just an object but a logos that can lead the wise listener to knowledge of God’s transcendent and immanent presence.

A scientific observation can lead to wonder—the marvel of photosynthesis, the intricate structure and function of leaves, interconnections with the ecological community and ecosystem—but wonder is not praise or thanksgiving to God the Creator. Student wonder can be fostered and encouraged with philosophical and theological work. Contemplation of the natural world is, as St. Basil the Great preaches, “a training ground where they learn to know God; since by sight of the visible and sensible things the mind is led, as by a hand, to the contemplation of invisible things.”

St. Basil (330-379 A.D.) intended to guide Christians through such an encounter as he preached on the six days of creation, calling his listeners to recognize their place in God’s divine economy. St. Basil’s intention in delivering his Hexameron homilies was to free his Christian listeners from their fascination with the theater of the city so that they could be free to enter the “august and blessed amphitheatre” of the natural world, “the workshop of divine creation.” Christians are not to be passive spectators in the amphitheater; rather they are to be active participants investigating “the great and prodigious show of creation,” thereby becoming “well prepared auditor[s]” or listeners. St. Basil exhorts his listeners, “I want creation to penetrate you with so much admiration that everywhere, wherever you may be, the least plant may bring to you the clear remembrance of the Creator.”

Listening to the Logos

We must first be aware of the “least plant” or tree around us. For most of my students, the natural world is often an overlooked backdrop or ornament to the real theater of life: technology, social media, smart phones, music, virtual reality. Like many people in the United States and beyond, they live at a great remove from the natural world and its organisms.

My task was to push the students out into the natural world and to bring the natural world of back into class. I started every class with a picture I had taken of an organism found on campus. I called it the logos of the day. It introduced the students to the marvel of organisms, great and small from diverse habitats: Hooded Mergansers, a majestic winter waterfowl migrant finding refuge on the twin lakes on campus; a mud-dauber wasp mound stocked with paralyzed spiders, food for the future wasp larvae; a bracket fungus growing on a tree. The logos reiterated daily the relationship of these organisms to the divine Logos who was born of the Virgin Mary. Creation and redemption are part of a single divine economy. Outside the classroom, the students had extended contact with their own selected logos, and this repeated visitation motivated the ecological conversion that took place.

Conversion manifested itself in personal understanding and in newfound relationships to the natural world and to God. Contemporary students are stretched thin, and this project helped them recognize the good of stillness, silence and contemplation upon ultimate things and upon God. Many students lived out the Psalmist’s exhortation: “Be still and know that I am God” (Ps 46:10). Every student who had expressed an initial skepticism about the project had written by semester’s end that he or she had come to look forward to this time with the tree as the best part of their week because it was the only time in their schedule when they could be quiet and still. Four students volunteered to continue this meditative stillness before their tree for the rest of their time on campus. Others recognized they could use this time for prayer.

Most students also developed a greater awareness and appreciation of creation and the natural world. Prior to the course, some students admitted only being aware of trees in general on campus, but by the course’s end they actively looked at and now recognized different types and shapes of trees. A few students never had thought of themselves in relation to creation but only other people; now they viewed themselves, as one student wrote, from a “grander scope.” The project also rekindled some students’ interests in being out in nature. Others wrote that now all of nature helped reveal God to them.

Contemplating a tree and its ultimate origin, guided by the richness of the church’s teaching about creation, opened the minds and hearts of students who were previously unaware of the relationship that exists between themselves, their tree and Jesus Christ. This awareness is but the beginning of a Christian response to “the cry of the earth and the cry of the poor­­” (No. 49). Ecological conversion is possible, but it requires joyful immersion in the theater of God’s creation, guided by the rich tradition of the church to grow in wisdom.

Terrence P. Ehrman, C.S.C., is a Holy Cross priest and a visiting assistant professor in the Institute for Church Life at the University of Notre Dame.