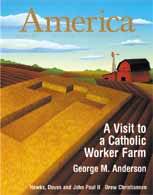 Houses of hospitality on the land”—this is how Dorothy Day described the Catholic Worker farms that began to spring up in the 1930’s. In May, I had occasion to visit one of them and experience a weekend’s hospitality at the Peter Maurin Farm in Marlboro, N.Y. The farm, named after the co-founder, with Dorothy Day, of the Catholic Worker movement, is just one of a number of farms spread out across the country, from the East Coast to the West.

After an hour and a half’s train ride from Manhattan, I was met at the station by two longtime Catholic Workers, Tom and Monica Cornell. On the way to the farm we passed extensive apple orchards, as well as migrant camps that house the orchards’ workers. Most are from Jamaica and Mexico, and many are undocumented. But we also passed a half dozen elaborate new houses—“McMansions” the Cornells call them—that stand out in vivid contrast to the camps and the humbler homes of most local residents. The McMansions represent something akin to rural gentrification, a phenomenon related to the fact that Ulster County lies close enough to New York City to make daily commuting entirely possible.

As farms go, the Peter Maurin Farm is not large—50 acres, with over half the acreage in wetlands. Nor does it have livestock, which, Tom and Monica explained, would require complex and expensive maintenance. Instead, the farming concentrates on a large gardening operation that provides fresh produce not only for the farm’s residents, but also for the two Catholic Worker houses in Manhattan. Even then, enough remains to send a supply to a home for single mothers and to the migrant camps. Much of the produce is preserved for winter use, creating a year-round food supply. The weather was still too unstable for the full gardening to begin, except for potatoes, which their son—the chief gardener—was already planting.

Acquired in 1979, the farm has space for 15 people, spread out in two houses and a converted barn. Some of the residents are physically or psychologically vulnerable. One, for example, a man from Barbados, is suffering from cancer. “The Vassar Hospital in Poughkeepsie asked if we could put him up for three weeks once he no longer needed hospitalization,” Tom said. “We said O.K., knowing what three weeks meant—he’s been with us well over a year.” But he added that this and other area hospitals have been generous in assisting with the health needs of residents like this one, who are both uninsured and undocumented.

Although the farm is several miles from the town of Marlboro, it maintains ties there and with the wider region too. It has no wish to be isolationist. The Monday following my visit, in fact, Monica was planning to host a meeting of ROAR, the acronym for Religious Organizations Along the River, a group that deals with environmental issues like the pollution of the Hudson’s waters. But in the minds of many townspeople, the farm’s identity remains obscure, and Monica and Tom said that some refer to it as “the camp,” which suggests that they view it as another form of migrant workers’ camp. The Saturday afternoon of my weekend visit, I became aware of this cloudy perception during a walk into town with an Irishman who has been at the farm about a year. Trudging along at the road’s edge, we became the object of curious stares from passing motorists, but the stares were not always unfriendly.

Monica and Tom have been at the farm since 1993. They met in New York City almost four decades ago, when he was managing editor of The Catholic Worker newspaper. Monica came as a live-in volunteer from Ohio, settling in at the Catholic Worker house, which was then on Chrystie Street on the Lower East Side. It was there that they met. Theirs is just one of a number of Catholic Worker marriages that have taken place over the decades. A married daughter lives 10 miles south of the farm in Newburgh, where she and her husband have begun another Catholic Worker undertaking called Aleluya House, which reaches out to Hispanic migrants working in the local factories and in the orchards. Like her brother-gardener’s work at the Peter Maurin Farm, the daughter’s present work serves as an example of the way the offspring of Catholic Worker couples sometimes follow in their parents’ footsteps. In the case of Monica and Tom, the connection has actually reached the third generation, because Monica’s parents were themselves Catholic Workers in Cleveland. She mentioned that while traveling to give talks, Dorothy Day used to stop over at their home.

Like much of the East Coast, the area around the farm has suffered from an extended drought. The night of my arrival, partial relief came in the form of a downpour that lasted into the following afternoon. Once the skies cleared, Tom led me on a walk around the property, past the garden and a hermitage, to a large pond. Because of the drought, and because the farm depends on a well for its water supply, water usage is carefully monitored. “In the summer, when students come to help out,” Tom said, “we tell them to go to the pond to take their baths.” Rain water is collected in huge blue plastic barrels by one of the houses and is then piped directly into a washing machine in order to avoid overburdening the well.

My room was in the larger of the two houses. In both I saw reminders of the Catholic Worker’s origins and its commitment to Gospel nonviolence. The dining room of the larger house—the general assembly point—has on its wall a handsome wooden crucifix carved by the artist Ade Bethune, who did many of the illustrations for the newspaper from the 1930’s until her death in May of this year. Also hanging on a nearby wall were two etchings by Fritz Eichenberg, another of the contributors to the paper’s artwork. In the smaller house, which is occupied by Monica and Tom and the man from Barbados, are photographs of Dorothy Day as well as two of Tom being arrested in the l960’s for peace-related protests in Washington, D.C. Another, taken last year, shows him being arrested at the U.S. Mission to the United Nations in New York City. As Tom drily noted, “I have not withdrawn from the fray.”

One act of protest during the Vietnam War involved Tom’s burning his draft card in Manhattan’s Union Square, a famous rallying spot for protests and also the site where Dorothy Day distributed copies of The Catholic Worker newspaper when it first began in the early 1930’s. Tom received a six-month sentence for the draft card burning, and while he was serving his time at the federal prison in Danbury, Conn., Monica and the children lived at the predecessor of the present farm, a large one called Tivoli on the banks of the Hudson, which eventually proved unmanageable because of its size and internal difficulties. (I myself made a retreat at Tivoli before joining the Jesuits and met Dorothy Day there for the first time.)

Tom was one of three pacifists who helped in the drafting of the bishops’ peace pastoral. Currently, he is an associate editor of The Sign of Peace, a journal of the Catholic Peace Fellowship, of which he was once the executive director. But over the years, he also felt called to the diaconate and in 1988 was ordained a permanent deacon. He now serves at the local Catholic church. We drove there for Mass on Pentecost Sunday, a day of extraordinary brightness following the heavy rains earlier in the weekend. The church was crowded, because children who were candidates for confirmation were to be presented to the congregation.

On the way back from Mass, Tom and Monica pointed out the cemetery beside the road that leads to the farm. The church donated 10 burial plots for those who died there. The most recent graves hold the remains of two residents who died just last year, Victor and Zeke. In an article in last year’s October-November issue of The Catholic Worker, their son wrote movingly of the care both men received in their final illnesses. And although gardening is his principal job on the farm, he observed in the same article that “a Catholic Worker farm is for people first, for farming second.” The 10 plots are now filled, and further ones will be needed. The oldest resident, Slim, has lived in Catholic Worker houses most of his long life. Now 82, his years are inevitably numbered, and a plot for him in the cemetary has already been purchased. But the ongoing care he receives from other members of the community—and the farm is assuredly that, a community—could serve as an example of the loving attention all elderly men and women should receive in their final years.

On the way to the train station on Sunday afternoon, we stopped at Aleluya House in Newburgh for a brief visit with the new Catholic Worker family there—Tom and Monica’s daughter and son-in-law and their three children. Located in the poorest section of that depressed city, the house’s top floor is currently occupied by a Guatemalan family. A double garden in the back was about to be planted with vegetables, and until they mysteriously disappeared, there were chickens too—a kind of minifarm in itself. But whether in the city or on one of the farms, the works of mercy continue to be carried out in Catholic Worker communities, and Gospel nonviolence continues to be promoted in a way that would have met with Dorothy Day’s approval.

George M. Anderson, S.J., an associate editor of America, is author of With Christ in Prison.