Who ever thinks of Uruguay? One of the smallest countries in Latin America, it receives scant attention in the media. Much about Uruguay, however, is noteworthy. Uruguayan Bishop Luis del Castillo, right, visited America House and pointed out, for example, that his homeland has a 97 percent literacy rate. “We had universal free education as early as 1880,” he said, “and the school system extends even to remote rural areas.” He added that the state university is also free. “You can get a degree in law, engineering, medicine and even a veterinarian degree.” On the down side, however, he noted that the quality of public education has been deteriorating over the past few decades on both the high school and the university level. 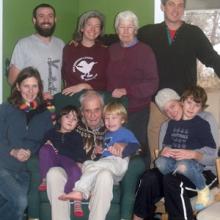 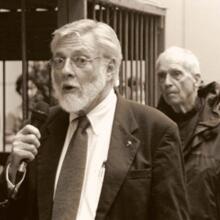 There are not many of them left, those who worked closely with Dorothy Day, the founder with Peter Maurin of the Catholic Worker Movement. Among them is Tom Cornell, still vigorous in his mid-seventies, with only a cane to suggest his advanced years. During a July visit to America House, Cornell said, half seriously, half in jest, “My two children gave me my fiftieth wedding anniversary party five years early, because they were afraid I might not make it to the actual date.”

Cornell had come down that morning from Peter Maurin Farm in Marlboro, New York, a two-hour train ride south to Manhattan. He was reflecting on his life as a long-time Catholic Worker, which began during his college days at Fairfield University in Connecticut. He read Dorothy Day’s autobiography, The Long Loneliness, and began to visit the Catholic Worker headquarters on weekends to minister to the many needy men and women on the Lower East Side and to probe questions of war and peace with older Catholic Workers. That ministry together with a commitment to non-violence in all its forms continues to this day, both in New York and in Worker houses around the country and abroad.

In the early 1960s, Cornell became managing editor of the Catholic Worker newspaper, all the while heavily involved in the peace movement. He spoke of spending 14 years with the Fellowship of Reconciliation and over 30 with the Catholic Peace Fellowship, of which he is a co-founder. He also noted in our conversation that the U.S. bishops appointed him, along with Dorothy Day, to attend the 1967 Third World Congress of the Laity in Rome. Having become a permanent deacon, at the Fourth World Congress in 2000 he served as Pope John Paul’s deacon at the Mass of Christ the King in St. Peter’s Square. In addition, Cornell said, “I was a consultant for the 1983 peace pastoral and I’ve visited 16 nations on various peacemaking missions.” Much earlier, in March 1965, he was one of Martin Luther King’s marshals on the March to Montgomery. 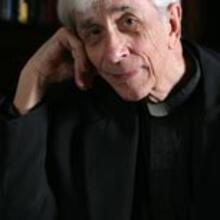 Of Many Things
Of Many Things
George M. AndersonDecember 20, 2010
A new exhibit highlights the achievements of women religious in America.

In All Things
Pax Christi Ireland
George M. AndersonDecember 17, 2010
Pax Christi Ireland is one of the smaller sections of Pax Christi International Its general secretary Tony D rsquo Costa spoke of its work during a recent visit to New York to attend a series of NGO at the United Nations He stayed with us at Dan Berrigan rsquo s community in Lower Manhattan Beca 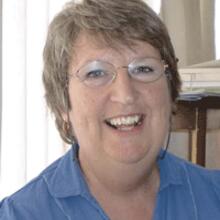 In All Things
Dan Berrigan's Latin American Exile
George M. AndersonNovember 05, 2010
In the mid-1960s in response to conservative Catholics rsquo intense criticism of Dan Berrigan rsquo s outspoken opposition to the war in Vietnam his superiors sent him to Latin America Although his supporters saw it as an exile his three months in several Latin American countries had its posit

In All Things
Ellen Stewart's Genius
George M. AndersonOctober 15, 2010
The MacArthur Foundation recently announced the annual recipients of its so-called genius awards Twenty-three people received grants of half a million dollars each to use in any way they wished One early winner whom I personally know was Ellen Stewart founder and director of La MaMa E T C Expe

In All Things
Our Wasteful Ways
George M. AndersonSeptember 28, 2010
Finding useful objects strewn about on the sidewalks and streets of New York--surely one of the most waste-prone cities in the nation--happens frequently as I move about between home and work I have lived in other big cities but either the residents there are less wasteful or else their sanitati 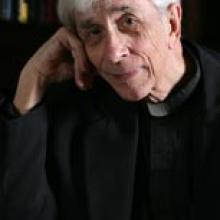 Of Many Things
Of Many Things
George M. AndersonSeptember 27, 2010
Reflecting on Dorothy Day's spiritual life has helped me navigate my own.