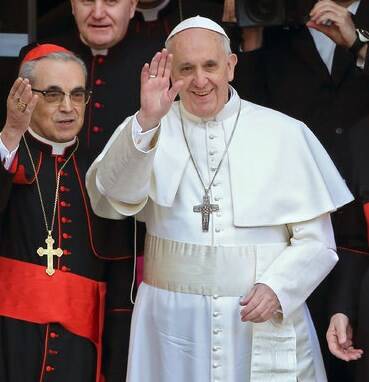 Visit this page for America's latest news and commentary on Pope Francis, the first Jesuit to be elected pope. Last updated: April 5, 2013.

Quo Vadis? Reflections on the Shape of the Church to Come, James Hanvey, S.J. (March 18 Issue)

After the Scandals, Cardinals Look to Reform Roman Curia, Signs of the Times (March 18 Issue)

In All Things Blog

Washing the Feet of Women on Holy Thursday, John A. Coleman, S.J. (April 1)

Father General on His Visit with the Pope (March 19)

Pope Francis and People of Others Faiths, and None, Francis X. Clooney, S.J. (March 16)

Pope Francis: A Conservative Who Sides with the Poor, Kevin Clarke (March 15)

From Rome: End of the Beginning (March 19)

From Rome: Eve of the Installation (March 18)

From Rome: The First Weekend (March 17)

Homepage for the Jesuits in the United States

Homepage for the Jesuit headquarters in Rome

CNN.com: What is means for one of my brothers to become pope, James Martin, S.J. (March 14)

The Shape of the Church to Come, a podcast with James Hanvey, S.J. (March 11 issue)

"A Reader's Guide to the Papal Transition" by James L. Franklin