Paying our respects to Brian Doyle 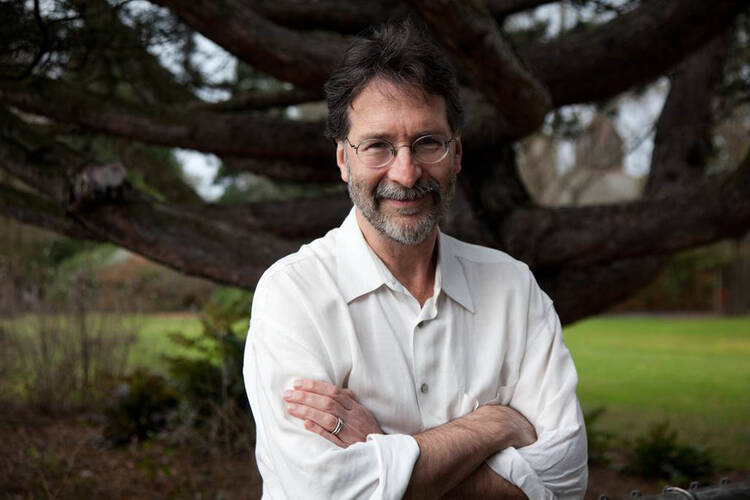 Photo courtesy the University of Portland

It is a strange thing to mourn the loss of someone whom you have never met, but with whom you have been in touch in the various virtual ways people are in touch these days. I communicated with Brian Doyle only via e-mail, as we went back and forth about his contributions to America over the years. Still, when we learned on Saturday that he had died, I felt I had lost a friend, albeit one with whom I spent a disproportionate amount of time discussing commas.

It was a delight to edit Doyle’s prose. His unique style and tone created texts so tight that his manuscripts often were left relatively untouched by our editors, save some added punctuation intended to break up his paragraphs, which were filled with grace and unconcerned with grammar. Doyle’s own knowledge of his work often meant that he noticed every comma or period that we added. Yet even his protests were poetic. He once objected to a comma, explaining, “i love runs of adjectives like bursts of salmon in a river.”

Brian Doyle's essays were filled with grace and unconcerned with grammar.

Doyle is survived by his wife, daughter and two sons. In 2006 he wrote a poem called “Grief” for America, and it contemplates the rippling effects of grief on a family in which one parent had died, a situation now all too familiar to his family. Doyle had an ability to focus on all the easily missed moments that surround the bigger events of our days. He described these instants of faith, of doubt, of change. He saw the everyday with new eyes—old Catholic school gyms (“metal folding chairs stamped with the name of the parish and painted a color never seen before and never again in the world except on parish folding chairs, a color something like gray and brown had gotten married and gone to sea for their honeymoon cruise and both were terribly seasick”) and Jesuits (“I conclude they are wise because they know they are not”) and scapulars (“how easy to sneer at them as devotional mania or simple-minded superstition, but how anciently and deeply human and humble to see them as things we can daily touch and see and smell, to remind us of that which is far beyond our poor dim senses”).

Growing up with my boys at Mass
Brian Doyle

He reminded us not to miss that moment at the Easter vigil as each sponsor placed his or her hand on the shoulder of their candidate (“Such tiny things mean so very much, don’t they? The little things that are not little at all”) and not to worry about kids squirming at Mass (“how good and holy that is, that there are still little kids under the seats, paying no attention whatsoever. But they will”). His final article for America, “Growing up with my boys at Mass,” had particular resonance for me, as I was pregnant with my son at the time, and I told him as much. “Prayers and best wishes on your passenger, your tenant, your new roommate,” he wrote back.

In Doyle’s essay “Paying our Respects,” he writes about suits and tradition and babies and a bachelor uncle being waked. “At the funeral a number of people laughed so hard they wept,” he wrote. Doyle, it seemed, held a certain reverence for the nearness of life and death. Let none of us forget it.

Kerry Weber is an executive editor at America and author of Mercy in the City.

Well written, Kerry! Thank you for the kind words about Brian. He was truly a literary treasure and his essays are the stuff goosebumps are made of. He will be missed. m.e.

Such sorry news! Have many of his books and enjoyed all his contributions to US Catholic, America and other publications. Yes, he was a real treasure.
Mary E Nolan
subscriber

Brian Doyle shows me how to live, how to die, and how to be Catholic. I love his writing. RIP.

I am currently reading Brian Doyle's novel "Chicago". In this story, a young man moves to Chicago to take a job at a Catholic magazine. On his first day on the job, his boss hauls him in to his office to set down the ground rules and inform him what is acceptable and unacceptable in the office regarding many matters. One of the rules is something like: "we do not deride or defame any religious orders, ESPECIALLY THE JESUITS". I got a kick out of that.

"You never see a statue of the man who invented pants whereas there are endless statues of men brandishing swords and rifles and pistols as if brandishing implements by which we steal life from fellow holy beings is an admirable thing, more laudable than the genius of pants.
By rights there ought to be a statue in every self respecting city of a man brandishing pants, or a frying pan, or a beer mug to celebrate inventions that clearly and arguably make life better." ... Brian Doyle