Paying Our Respects: Life, death and the home country 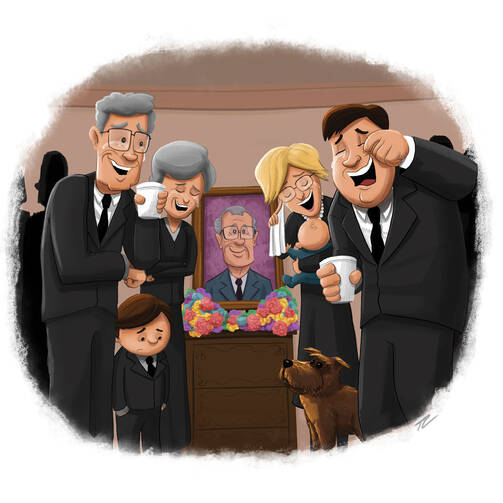 The wedding was on Saturday afternoon, between an American Irish woman and an American Irish man. Both vast clans were in nearly full attendance and there was a great deal of dancing and laughing and dandling of babies. I counted four young women who were enormously pregnant and, as a priest said to me, if God is in high humor today one or more of those women will deliver during the wedding reception and we will welcome new guests to the feast.

Sunday everyone slept in and then went to late Mass.

Monday morning was the funeral of the bride’s beloved bachelor uncle. More than 50 of the people who had been at the wedding were at the funeral. Three of the four pregnant women were there also and the priest said it would be good for one to deliver here because we have a lovely baptismal font in this church.

None of the pregnant women delivered during the funeral, although one of them said to me later she thought she was going to deliver right there in her pew because she was laughing so hard when the deceased uncle’s nephew did a spot-on hilarious imitation of the uncle’s famous soft-shoe dance while singing in pubs, which he loved to do and did very well and fairly often.

At the funeral a number of people laughed so hard they wept.

Because so many of us at the wedding and the funeral were American Irish, there was Gaelic in the air and most of the older men wore the black suits that every American Irish male of a certain age has in his closet for wakes and funerals. Most of the younger men wore suits of many different colors and sheens. The priest and I noticed this and he said with a smile that it is the nature of traditions to change, this is normal and natural, and we would be foolish to gnash our teeth about the loss of the old ways, but I do like the way so many of us of a certain age are in our blacks, for I am reminded of my forebears, and that is a warm and welcome memory. We waked the dead in the old way in our family, the wake going all night long over the casket and then everyone off to Mass in the morning, several men trundling the casket down the steps of the house to the church.

There was a moment at the funeral, just after one of the pregnant women read aloud from the New Testament and before the older brother of the deceased spoke a wry and heartfelt eulogy, when a small great-niece needed to go to the crying room, and her lanky father carried her down the aisle, through the massed rank of the clan of both the bride and the deceased, and as the father and the child walked down the aisle several hands, male and female, rose up to touch the man and the child, just for an instant, without any drama or even conscious intent, I think, and I stood there, in the back of the church, near the baptismal font, and wept, for reasons that are not wholly clear to me even now as I try to speak them with my fingers. Life and love and death and laughter and black suits and babies on shoulders and Gaelic in the air and your beloved bachelor uncle opening his mouth to sing in the pub of a Friday evening.

It was long ago our people left Ireland, and well they should have, fleeing famine and savagery at the hands of the imperialist slavemaster, and finding peace and joy in America, where they were free to speak their minds and worship as they please; and not one of us at the wedding and the funeral would choose to return to the wet green rocky island from which so many of our forebears came, for our beloved America, despite its greed and violence, is a nation unlike any other in its verve and roar, its creativity and courage, its sweep and scope, the nation where our people came to harbor after many a storm at sea; but very many of us at the wedding and the funeral these last few days were proud that we were Meiriceánach Ghaelach, American Irish, and the only thing that would have made it an even more deliciously American Irish triad of days is if two of the pregnant women had delivered their babies, one as a sudden wet gift to the newly married couple and one as a vigorous squalling prayer in memory of the deceased, may he rest in peace.

Brian Doyle is the editor of Portland Magazine and the author, most recently, of A Book of Uncommon Prayer (Ave Maria Press).