Are religion and spirituality separate realities? 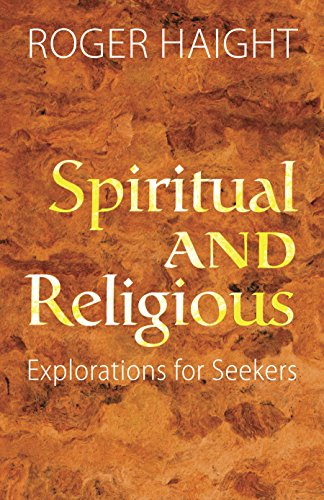 “Gird up the loins of your mind” (I Pt 1:13 ) and dig into this new book by Roger Haight, S.J. In 14 mind-stretching chapters, Haight continues his effort to create a “comprehensible, Christian vision in a secular scientific age.” Seekers of spirituality and meaning exist everywhere, in and out of religion, and Haight wishes to reach them. He would proclaim God’s “grace filled naturalism” to one and all. Jesus’ spirituality is the essence of the good news.

By actively following Jesus’ way of life, Christians can promote noncompetitive relations with other religions, as well as with secular spirituality and science. Haight sees religion and spirituality as separate but sometimes overlapping realities. Religion is “a set of beliefs, values and practices that together identify what ultimate reality is and help establish the relationship that obtains between this ultimate reality and the practitioners.” He recognizes that the organized communal institutions, authorities, traditions and practices of religion are necessary and possess great value. But religions depend upon the primary prior existence of spirituality. For Haight, spirituality is a “comprehensive and holistic category.” A working definition includes “the logic, or character, or consistent quality of a person’s or a group’s pattern of living insofar as it is measured before some ultimate reality.” More simply put, spirituality can be seen as “something like personal identity in action.” Consequently, religious belief or membership is not necessary for spirituality; nor is some “esoteric” otherworldly practice.

The most crucial ingredient of spirituality, Haight argues, is in its active pattern of daily living. What counts is what one does and how one treats other people. Spirituality also can be spontaneous or deliberative, conscious or unconscious, individual or group, and religious or secular. Those who follow Jesus’ spirituality will act in the loving, selfless way that Scripture shows Jesus living. Jesus represents, symbolizes and mediates God’s grace and will. He is unique; his resurrection by God initiates Christianity.

Haight cites four Christian exemplars of Jesus spirituality: John Calvin, Martin Luther, Meister Eckhart and Ignatius Loyola. To a man these followers of Jesus act vigorously, strenuously, unselfishly and dominantly. But each brings his own unique gifts to ministry. Ignatius is further praised for creating the Spiritual Exercises, which lead others to follow Jesus. Participants who engage in these imaginative re-enactments of Gospel narratives are enabled to “fuse” their own concrete life narrative with that of Jesus. For Haight, the exercises can be an ecumenical resource, since no Catholic eucharistic or other church practice is required beyond the common Gospel narratives.

Narrative is central to Haight’s analyses of questions taken up in these chapters. He places each topic within its historical and cultural background. He tells the story first, then follows with its theological and spiritual interpretation. Here readers reap the benefit of Haight’s broad fund of knowledge and intellectual insight. Along the way, the historical development of the Christian scriptures, creeds, churches and theologies are covered. Changing cultures, philosophies and social and scientific theories are analyzed as they play their part in the narratives.

He emphasizes change. The message seems to be that once you understand how and why something evolved over time and was accepted and adopted, then you too can affirm changes. For Christians, the church must be ever-reforming in response to God’s Spirit and Jesus’ spirituality. For Haight there is less concern for an eternal truth or for ensuring the evolutionary continuity of doctrine à la Newman. His emphasis upon behavioral action, dynamic pluralism and individuality tips the balance of religion against abstract metaphysical thought. Readers can understand why Haight has drawn criticism from religious authorities.

Yet Haight is such a subtle and nuanced thinker, a veritable master of interpretive theory, that he holds his own. He defends pluralism, ambiguity, flexibility, individual difference and progressive change as God’s gracious will. Divine mystery is recognized. Roger Haight’s own Jesus spirituality appears evident in his writing. And with his championing of pluralism and individual spirituality, a reader who differs can feel free to dissent.

I, too, value the Second Vatican Council’s aggiornamento but give equal weight to its ressourcement. I embrace reform and the social gospel but also treasure mysticism, metaphysics, theology and aesthetics. Gratefully, I recite the Nicene Creed as God’s essential message of love and union with creation. Thus I wince when Haight calls the Trinity “a failed doctrine.” Not for me it isn’t. It’s Haight’s efforts to reinterpret the Trinity as “the central Christian doctrine” through a narrative analysis that miss the mark. In inclusive Catholicism, God can be embraced as tender Mother giving comfort and joy, playfulness and erotic delight. I can embrace St. Therese’s “little way,” and Paul Ricouer’s “second naïveté.” At the same time Haight’s effort to reform and rethink religion and spirituality responds to the great promise, “Behold, I make all things new” (Rev 21:5).

Haight’s chapter on the spirituality of the cross works admirably. It demonstrates the strengths and virtues of his method. An informed narrative of what is known of the historical crucifixion is followed by a convincing interpretive analysis. A suffering and crucified messiah presented a problem for the early church. The overwhelming surprise of the resurrection added to the difficulty of understanding. In the ensuing efforts to comprehend the meaning of the cross, one can see the retrospective rewriting of the historical accounts to include prejudices against the Jews as well as elements of Jewish themes of sacrifice and the suffering servant. Other explanations developed in the Middle Ages, including substitution and satisfaction theories, were widely accepted until recently. Understanding these developments can be liberating, although, as Haight avers, they by no means solve the mystery of suffering. Haight emphasizes the importance of the resurrection but slights eschatology and new theological treatments of the ascension. Would Haight see these currents negatively because they appear too “distant from the current conception of the universe”? Haight is rightly concerned with the conception of the universe and provides an excellent chapter on “Following Jesus in a Scientific Age.”

Haight embraces, as I do, the development of science as a great gift of God’s Spirit. I too am grateful to the theological and scientific thinkers that Haight praises. Thank you, Teilhard; thank you, John Haught; blessings to you, Elizabeth Johnson. Haight succinctly lays out the challenging problems of relating science and religion. One that he seems to miss is that of letting our allegiance to science trump other ways to knowledge. Reductive materialism rides high and regularly asserts that something “is not plausible” or “literally not to be believed” in the “present context.” But with God and science, the present becomes transfigured in the blink of an eye. Believers must resist being captured by any status quo. At this moment scientific disputes are raging over the nature of time, space, matter, mathematics, quantum theory and consciousness. In the psychological sciences also, questions of the mind/brain/body relationship zero in on consciousness. What do religion and spirituality have to say? Oh, how I wish I could hear Haight’s thoughts on quantum theory and consciousness. Even though I have not been able to do justice to the richness of this present book, I’m already eager to read the next.

This article also appeared in print, under the headline “A Nuanced Thinker,” in the November 7, 2016, issue.

Sidney Callahan is an author, lecturer, college professor and licensed psychologist. Her most recent book is Created for Joy: A Christian View of Suffering.