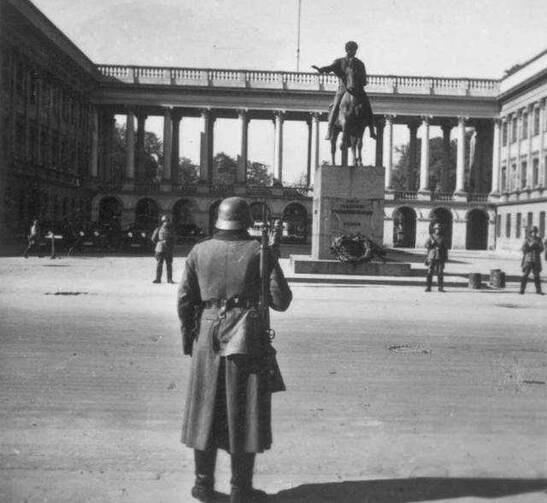 They met at Saint Justyn’s Orphanage in Warsaw in 1943. He was Otto Brack, 15, the son of devout Communists deported by the Nazis. She was Roza, 14, an orphan who knew nothing of her parents.

The Day of the Lieby William Broderick

Her secret place at the orphanage was an attic full of broken furniture and a window where she could look out over Warsaw. The other children didn’t venture to the attic since it was said to be haunted. But Roza would gaze out at the doomed city and find refuge, dreaming of life with a mother and a father. One Sunday, she discovered the door to the attic ajar, climbed up and found Otto gazing out the window and smoking a homemade cigarette, which he offered to her.

“This is my room,” she said, smoking a cigarette. “What are you doing here?”

The boy breathed in black fumes from the cigarette. “I am thinking of my father and my mother.”

They met there often afterward and watched from the garret as Warsaw collapsed in smoke. When the Nazis were near the end and the Red Army was closing in, they left the orphanage. Surrounded by the fury of battle, Roza led Otto into the sewers for shelter. There they descended to the filthy stream, dead bodies floating by “like sleeping watchmen.” Roza wondered why the Red Army didn’t help the Poles. Otto, like his father, had no doubt that the Soviets would bring a future “without chains.” They came to a T-shaped junction in the sewer and Roza somehow knew they had to separate.

Later she married a resistance fighter, Pavel Mojewska, and supported a journalist code-named the “Shoemaker,” who published a resistance newspaper. Otto Brack became a Communist officer dedicated to capturing the “Shoemaker.” Roza was arrested in 1951 with her friend, John Fielding, an English foreign correspondent who would meet her at a cemetery monument to Boleslaw Prus, a figure fighting against Imperial Russia a century before. Fielding was thrown out of Poland, while Roza was imprisoned in the darkness of Mokotow Prison, in the dungeon built by the Russians, passed to the Nazis and then passed to the Soviets.

Somehow events brought Otto and Roza together again, this time in prison. He showed no tenderness for their past, but subjected her to rough treatment. She refused to reveal the journalist’s identity, so Otto had her husband and his associate beaten and shot. But the miracle of life bloomed again. While in prison, Roza gave birth to her dead husband’s child. Brack stole the newborn and brought the child up himself.

Decades pass and later Roza is hounded by a lawyer intent on convincing her to testify against Otto Brack. In England, John Fielding receives a call from Roza as she is on the verge of testifying. Fielding calls his best friend, Father Anselm Duffy, “jazzman, beekeeper and brooder on life’s conundrums.” Father Anselm, lawyer turned friar, obtains his superior’s permission to help investigate. (The book’s author, William Broderick, is another friar turned lawyer.)

Father Anselm resolves the mystery, but he is puzzled by the greater question—the mind of Otto Brack. He ponders Otto’s behavior: he kills men as if they were animals and treats women as rags. His conclusion is that he is simply an “evil man.” In his retirement, Otto collects stamps. He defiantly explains himself to Anselm: Strong men must take action, including torture, murder and baby-stealing. He has no remorse because he does as the strong man must.

Roza finally overcomes her fear of becoming emotionally involved with others and she agrees to testify. But she demonstrates her humanity and abandons the prosecution. The trial resolves in a way that satisfies Roza but no one else—not even Otto Brack, who is robbed of the chance to vindicate himself.

The story spans 60 years, and as Broderick tells the tale of Roza Mojewska and Otto Brack he tells the story of Poland itself, touching on Hitler’s goal of annihilating the Poles to give the Germans space. He describes the totalitarian Soviets with their killing fields like Molokow Prison, where so many Poles were slaughtered. From this darkness, Poland emerges by miracle to triumph through the resistance of the people.

Priests play central roles in Broderick’s story, beginning with Anselm Duffy, who is named after St. Anselm, the author of the Ontological Argument. The saint’s motto sheds light on Broderick’s purpose—faith through understanding. The book is complex, since the plot is not laid out chronologically but told by a series of flashbacks requiring concentration to piece the story together by reading and re-reading. There is no irony at the Soviets and their failed effort to create a communitarian world—which is a conundrum worthy of Anselm Duffy himself, who is mute on the subject.

There are five more works to read in the Anselm Mystery Series. There will be no new Anselm novels for now. Broderick will give his friar lawyer a rest, but we who have not yet read all the other five have riveting reading ahead.

This article also appeared in print, under the headline “A friar turned detective,” in the August 21, 2017, issue.