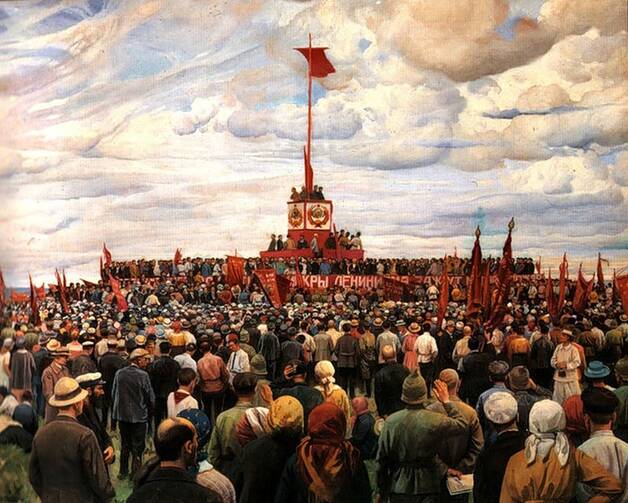 “Breaking your family’s heart was the price you paid for rescuing your own.” So begins Sana Krasikov’s debut novel, The Patriots, whichexplores how a Russian-American family’s experience with their motherland strains familial relationships.

Spanning years of tension between home and native lands, The Patriots weaves together the narratives of Florence Fein, her son Julian and his son Lenny over the course of the 20th and early 21st centuries.

Inspired by a true story, Florence’s life takes center stage for much of the novel. When she fails to find satisfactory employment in New York during the Great Depression, Florence sets out to reconnect with an old flame who has returned to the Soviet Union. Enamored of the ideals pedaled by the Soviet Union’s propaganda machines, she expects to adapt easily to the socialist utopia that was once home to her parents.

“I fear if I stay I may fall into the ranks of the indifferent,” Florence writes in a letter before leaving New York for Moscow, “or, worse, the eloquent malcontents. This thought frightens me more than anything else.”

Once there, Florence faces myriad difficulties. From finding suitable housing—she is often forced to share a living space with several other women at a time—to maintaining a job in an anti-Semitic society, Florence struggles to live out her Soviet dream. Desperate to return to the United States, Florence performs both foolish and unspeakable acts. Ultimately she becomes a pawn in Stalin’s police state, spending time in a prison camp in Siberia and leaving her son Julian an orphan.

A host of subtly developed Russian characters enter the lives of Florence, Julian and Lenny as they navigate a foreign and often hostile world. Florence befriends a melodramatic girl whose eyes are too close together; Julian does business with a tattooed and flabby Russian; and Lenny butts heads with a boss who “often disagreed but seldom argued.” Each minor character is distinct without falling into a stereotype.

Provocative lines and vivid descriptions in The Patriots keep the reader engaged. Profound thoughts are occasionally dropped into casual interactions. When Julian remembers his attempt to befriend a boy in the orphanage, he notes, “There is no greater demand you can make of another than asking him to suffer with you.” After a confrontation with a self-righteous lover, Florence is described as feeling “like a church bell that had been violently struck.”

The anxiety of living with a not-quite-native identity is palpable in Florence’s narrative, and it echoes throughout her son’s as he attempts to learn about his late mother’s past.

The anxiety of living with a not-quite-native identity is palpable in Florence’s narrative, and it echoes throughout her son’s as he attempts to learn about his late mother’s past. In sections alternating with Florence’s story, Julian visits Russia on business, where he must negotiate a deal with a petroleum behemoth while tracking down information about his mother. There he also visits his son Lenny, who, against his family’s wishes, has moved to Russia to work in finance.

One particularly striking motif in The Patriots is its reference to abortion. It first appears when a Russian man brusquely compares people at a sideshow to aborted fetuses. A boy at the orphanage describes in detail the illegal profession of his abortionist mother, and one of Florence’s coworkers talks about her daughter’s lucrative side business performing abortions. When Florence becomes pregnant, she ponders how best to react to the new life inside her, knowing that having a child would make escaping from the Soviet Union much more difficult. This shocking and distressing motif speaks to the characters’ ironic struggle to thrive in one’s homeland—a theoretically nurturing, motherly place that has been rendered inhospitable.

The Patriots offers an illuminating glimpse of life before the fall of the Soviet Union, revealing in part what living in the U.S.S.R. was like for the people trying to build it.

The Patriots offers an illuminating glimpse of life before the fall of the Soviet Union, revealing in part what living in the U.S.S.R. was like for the people trying to build it. While going about their daily lives, Soviets faced countless bureaucratic hassles. They had to apply for housing; their food was strictly controlled; foreign citizens had to renew their visas every five weeks. At one point, it was illegal to be unemployed in the Soviet Union. Fear of the state’s fickle and powerful justice system overshadowed any frustrations with its shortcomings. Overall, citizens’ devotion to Communist ideals, coupled with their fear of being arrested, created an exhausting, often tragic lifestyle.

Krasikov masterfully provides historical context for Florence’s story, including a detailed explanation on Joseph T. Davies’ unearned ascent to the position of ambassador to the Soviet Union under Franklin D. Roosevelt and his abysmal treatment of the office during his tenure. In addition, Krasikov includes copious information about anti-Semitism in the Soviet Union in the years immediately following World War II. She brings to light the ironic story of the leaders of the Jewish Anti-Fascist Committee, who led a state-supported war propaganda organization during the war and were later either assassinated or arrested on trumped up charges of espionage and then executed.

While onlookers wonder how a nation operated in loyal devotion to a murderous megalomaniac like Stalin, this novel seems an honest answer. “Over and over, life renewed itself. Over and over, it made itself blind to the death and destruction of the past,” Krasikov writes. “She was arriving at a revelation that the secret to living was simply forgetting.”

The Patriots deftly tackles the complexities of patriotism and parent-child relationships under the pressure of painful circumstances.

“[W]e’re all leashed pretty tightly to the era we’re living through,” says Florence’s brother to Julian, “to the tyranny of our time. Even me. Even you.”

Teresa Donnellan is an O’Hare fellow at America.