The secret to Archbishop Fulton Sheen’s power: ‘A thinking head and a feeling heart’ 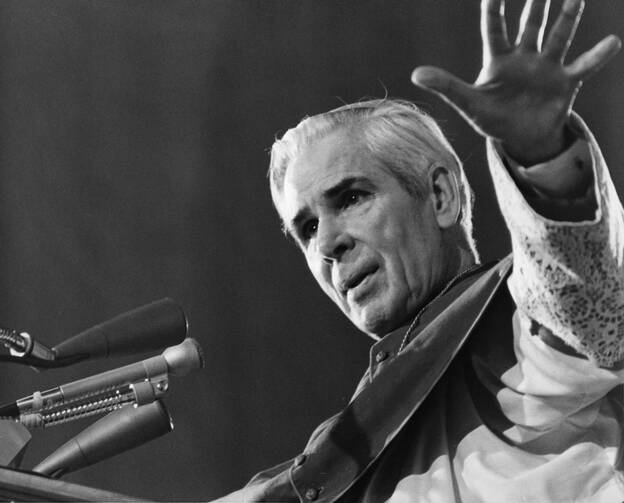 U.S. Archbishop Fulton J. Sheen is pictured preaching in an undated photo. As a priest he preached on the popular "The Catholic Hour" radio program and went on to become an Emmy-winning televangelist. (CNS photo)

“What is to be done with the body of Fulton Sheen?”

It remains my favorite headline of all time, one that graced a story I reported for America in October 2017 on a legal battle between the Diocese of Peoria and the Archdiocese of New York. At stake were the mortal remains of Archbishop Fulton Sheen, who was born in Peoria (well, not really; he was born in nearby El Paso, Ill.) but who had been buried according to his wishes in New York’s St. Patrick’s Cathedral (well, not really; he had asked to be buried in a cemetery in nearby Queens). At the time, Archbishop Sheen’s cause for sainthood was gaining steam, and both Peoria and New York thought he belonged with them.

Time magazine called him “perhaps the most famous preacher in the U.S., certainly America’s best-known Roman Catholic priest, and the newest star of U.S. television.”

The story had everything: A lawyer who had run for governor of New York in 2014 on the Sapient Party ticket; a plaintiff who arrived with a entourage of nuns; a quintessentially New York argument as to why anyone would want to be buried anywhere else but New York; and references to a long Catholic history of, well, settling these disputes by sending a piece of the body here and a piece there until everyone was satisfied.

Peoria won in the end: In 2019, Archbishop Sheen’s remains were disinterred from St. Patrick’s Cathedral and flown to Peoria. His cause for sainthood has been on hold since, apparently because of questions about Archbishop Sheen’s handling of priest sex abusers during his tenure as bishop of Rochester, N.Y.—but his tomb is now in Peoria’s cathedral and a nearby museum chronicles his life and works.

Before the term even existed, Archbishop Sheen was the foremost televangelist in the United States. Beginning with his radio show in the 1930s through several television shows that ran into the late 1960s, he attracted an audience of tens of millions (Catholics and non-Catholics alike) who treasured his gift for making sense of complex religious and spiritual material. He also wrote 73 books. When he appeared on the cover of Time in 1952, the magazine called him “perhaps the most famous preacher in the U.S., certainly America’s best-known Roman Catholic priest, and the newest star of U.S. television.”

If you’re not familiar with his famous television show, “Life is Worth Living,” the televangelist and his famous chalkboard can still be found on YouTube. (His name was also taken by another television and movie star who was a fan of that show in the 1950s—Ramón Estevez, better known to us as Martin Sheen.)

Made an auxiliary bishop of New York in 1951, Archbishop Sheen found himself at odds with Cardinal Francis Spellman of New York at various points, and some biographers have claimed Spellman forced Sheen to surrender his spot as host of “Life is Worth Living” in 1958. In 1966, Sheen was made bishop of Rochester in upstate New York, but he resigned the position three years later and was made archbishop of Newport, Wales, a titular see. He died on Dec. 9, 1979, at the age of 84, and was interred in the crypt of St. Patrick’s Cathedral in New York City, where he remained until 2019.

America has a special connection to Sheen—the literary executor of his estate is Patricia A. Kossmann, who was literary editor of America from 1999 to 2012 (and, for many years, the sole lay editor at a table full of Jesuits). Sheen also wrote four articles for America between 1936 and 1941, including one essay headlined “When Stalin Kissed Hitler the Communists Blushed Red,” which is 1930s clickbait for sure. One 1936 essay argued that Catholicism was the only effective counter to communism, because “The world is no longer broadminded; it wants intolerance. There are only two kinds from which the world can choose; the intolerance of Communism and the intolerance of Catholicism.”

Fulton Sheen’s vast TV audience was made up of more non-Catholics than Catholics.

A quarter-century after his death, Kossmann offered a tribute to Sheen in America in 2004. She had met Sheen while working as an editor at Doubleday (where she edited his books From the Angel’s Blackboard and Simple Truths), and remained friends with him until his death. Though Sheen was remarkably prolific as an author and speaker—in addition to his books and shows, he also wrote two syndicated weekly newspaper columns—Kossmann noted that “it was perhaps the three-hour-long Good Friday services at St. Patrick’s Cathedral and then St. Agnes Church on East 43th Street (renamed Fulton J. Sheen Place after his death) for which he is most fondly remembered by New Yorkers.”

“One of the most celebrated Catholic prelates of the 20th century, Fulton Sheen was an intellectual giant and forceful communicator, whose impact on Catholicism and American culture was due largely to his superb and effective use of the media,” Kossmann wrote. The onetime postulator of Sheen’s cause, the late Andrew Apostoli, C.F.R., (who was ordained a priest by Sheen in 1967) told Kossmann, “No one could speak in such depth of spirituality and have such a profound effect on people of all walks of life and of all ages without being a very holy person. Closeness to God makes one a greater instrument of his grace to others.”

Father Apostoli also noted that Sheen’s vast TV audience was made up of more non-Catholics than Catholics. “They listened to him because he spoke the truth with sincerity, and they deeply respected him for it. His is a voice that should never be allowed to remain silent,” Kossmann concluded.

When Archbishop Sheen died in 1979, America’s editors eulogized him thus:

The secret of Archbishop Sheen’s power was his combination of an educated and thinking head with a generous and feeling heart. Like every great figure in Christian history, Fulton Sheen regularly ascribed his gifts and his effectiveness to God.... [And] if Archbishop Sheen had not disposed himself to be the instrument of divine action, he would never have become the greatest evangelizer in the history of the Catholic Church in the United States.

"The secret of Archbishop Sheen’s power was his combination of an educated and thinking head with a generous and feeling heart."

Our poetry selection for this week is “St. Teresa’s Pillow,” by Laura Reece Hogan. Readers can view all of America’s published poems here.