What is to be done with the body of Archbishop Fulton Sheen? 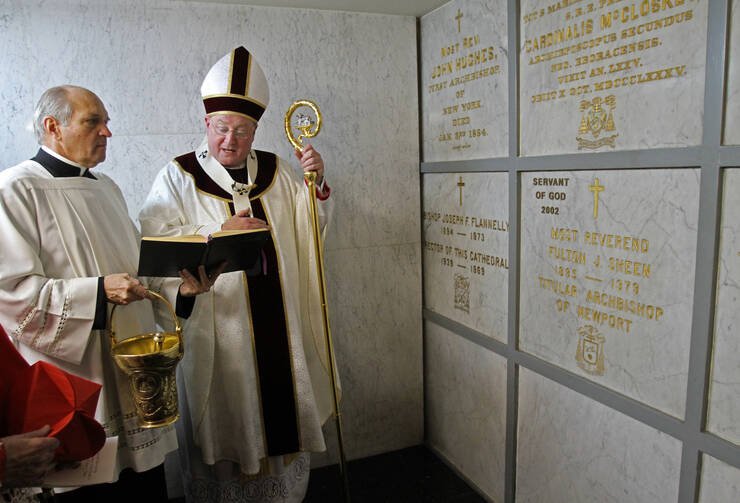 Visitors to the Appellate Division of the Supreme Court of the State of New York’s First Judicial Department on Oct. 10 in New York City might have enjoyed a rather unexpected departure from the usual legal folderol: the latest arguments in Cunningham v. Trustees of St. Patrick’s Cathedral. This legal battle is perhaps better known by the question both sides ask and offer answers for: “What is to be done with the body of Archbishop Fulton Sheen?”

The Venerable Fulton John Sheen, the most famous Catholic evangelist in American history, was born in Peoria, Ill., and ordained there in 1919, and the diocese has long desired the return of the remains of its native son. When the Archdiocese of New York said that it would not pursue Sheen’s cause for sainthood in 2002, the Diocese of Peoria opened its own cause, and Sheen was declared a servant of God (the first of three steps toward sainthood in the Catholic Church) that year.

The Most Rev. Daniel Jenky, C.S.C., bishop of the diocese, sought to have Sheen’s body brought to Peoria, both to collect relics and to inter his remains in St. Mary’s Cathedral in Peoria (the diocese already has a Fulton Sheen museum). The only problem is that Sheen’s body lies in the crypt under the high altar of St. Patrick’s Cathedral in New York, and Cardinal Timothy Dolan, Archbishop of New York, does not want to give him up.

A Life Worth Living

Sheen, the forerunner of modern televangelists, had a gift for parsing profound and sometimes complex religious and spiritual material so that it made sense to a popular audience, earning him an audience of tens of millions (Catholics and non-Catholics alike) on radio and television from the 1930s into the late 1960s. He also wrote 73 books over the course of his life and appeared on the cover of Time in 1952. The magazine called him “perhaps the most famous preacher in the U.S., certainly America’s best-known Roman Catholic priest, and the newest star of U.S. television.”

Made an auxiliary bishop of New York in 1951, Sheen found himself at odds with Cardinal Francis Spellman of New York at various points.

Made an auxiliary bishop of New York in 1951, Sheen found himself at odds with Cardinal Francis Spellman of New York at various points, and some biographers have claimed Spellman forced Sheen to surrender his spot as host of “Life is Worth Living” in 1958, though Sheen never criticized the pugnacious Spellman publicly. In 1966 Sheen was made bishop of Rochester in upstate New York, but he resigned the position three years later and was made archbishop of Newport, Wales, a titular see used mainly for honorary titles. He died on Dec. 9, 1979, at the age of 84, and was interred in the crypt of St. Patrick’s Cathedral in New York City.

Over the past 10 years, local and Vatican officials have been studying the case of a Peoria infant who survived for an hour without a heartbeat and suffered no permanent ill effects after his mother prayed to Fulton Sheen to intercede on her baby’s behalf. In 2014 a Vatican panel of medical experts announced it could find no natural explanation for the event, clearing the way for it to be officially attributed to Sheen’s miraculous intervention. (Ordinarily two miracles must be attributed to a candidate for sainthood by the Catholic Church before canonization).

The parties in court on Oct. 10 were there to argue an appeal by the Trustees of St. Patrick’s Cathedral of a November 2016 decision by the Supreme Court of the State of New York in favor of Joan Sheen Cunningham, Fulton Sheen’s niece and closest of kin. Cunningham had sought to have Sheen’s remains disinterred and moved to St. Mary’s Cathedral in Peoria, and the court ruled she had “provided a good and substantial reason” for the disinterment.

Sheen's niece has sought to have Sheen’s remains disinterred and moved to St. Mary’s Cathedral in Peoria. The Archdiocese of New York disagrees.

Not so, argued John M. Callagy, an attorney acting on behalf of the trustees of St. Patrick’s during Tuesday’s appeal before four appellate judges, because the reasons for disinterment were not substantial: that moving Sheen’s body to Peoria would facilitate the canonization process, that Sheen’s parents are buried in Peoria and that Sheen was himself was ordained a priest in Peoria.

The first reason offerred by Peoria, Mr. Callagy argued, is not necessarily true since Sheen’s sainthood cause is not guaranteed, and the second and third seem to be contradicted by the fact that Sheen himself purchased a funeral plot for himself in Calvary Cemetery in Queens, in New York City, shortly before his death. “This court has always made clear that removal of a body without good and substantial reason is essentially a desecration,” Mr. Callagy argued.

Given that Sheen’s own wishes for his burial were ignored, the wishes of the family should be honored, attorney Steven Cohn argued on behalf of Joan Cunningham, and the family wants their famous relative to rest in St. Mary’s Cathedral in Peoria. (Observers of the New York political scene may recognize Cohn’s name; he ran for governor of New York in 2014 as the candidate of the Sapient Party.) The Diocese of Peoria, Cohn noted, has suspended Sheen’s canonization cause because New York will not surrender its claim to Sheen’s remains; Cunningham and the Diocese of Peoria both received promises from Cardinal Edward Egan in 2002 that Sheen’s body would be moved to Peoria once the beatification process began; but now, Cohn argued, the Archdiocese of New York has changed its tune.

Given that Sheen’s own wishes for his burial were ignored, the wishes of the family should be honored, attorney Steven Cohn argued.

Cardinal Terence Cooke (whose cause for sainthood is also open), the archbishop of New York at the time of Sheen’s death, had told Sheen of the possibility he would rest in St. Patrick’s Cathedral, Cohn stated, a move Sheen tried to prevent. Alluding to the longstanding rumors that Sheen was at odds with Cardinal Francis Spellman and the rest of the archdiocesan hierarchy during his life, Cohn argued that “the one thing we know about [Sheen’s] intent is that he did not want to be buried in St. Patrick’s,” which is why he bought himself a funeral plot elsewhere. “They put him in the one place he didn’t want to be.”

An official ruling on the appeal should be released within two to six weeks, according to courthouse officials.

The day was not without its lighter moments. Mr. Callagy’s final point to the judges was that no one can predict whether Fulton Sheen will be named a saint even if his body is moved to Peoria; a thousand and one obstacles could still prevent his canonization. Wouldn’t it be a shame, he suggested, that Sheen had been removed for no reason from beneath the high altar of St. Patrick’s Cathedral in New York all the way to Peoria?

A previous version of this article mistakenly stated Fulton Sheen's age at death as 95.  He was 84.

I don't think Fulton Sheen is a viable candidate for sainthood. He was virulently antisemitic. I realize he was a product of his time but if he is proclaimed a saint, that will give new life to his work and given today's climate his words will be used against Jews.

I am not quite sure how you arrived at the conclusion that Bishop Sheen was anti Semitic. I have studied his life, teachings, writings, etc. for the last 30 years and have never found anything remotely anti Semitic in his work or personal life. In fact, Sheen was probably the most ecumenical/interreligious cleric of his generation. He counted among his many friends several Jewish actors, etc. Jack Benny was a dear friend of Sheen's. I am afraid that Ms. Mears is mistaken.

Sandra,
Do you have any proof you can provide ?
And why, America Magazine, is this slander against Bishop Sheen allowed to stand ?
Where oh where is the Comments Editor ?

No, Bishop Sheen was not "perfect" because he was human. He was however a learned and very entertaining theologian, two aspects one would think were incompatible. Would that we had another because Bishop Sheen did more to "popularize" Catholics as well as Catholicism than any man since St. Francis of Assisi. This "battle" belongs in the Middle Ages. It is symptomatic of everything that Fulton Sheen tried to explain away and modernize for the modern religionist. Leave him in peace! Oh, and disagreeing with Cardinal Spellman is not an indictment, nor heresy. The Cardinal was a difficult man himself. Bishop Sheen conducted himself humbly in the face of their personal contremps, and I am sure by now the two of them have reconciled all their differences. Peoria is very nice, but people expect to find Bishop Sheen in New York, the Big Apple, the scene of his many lucid broadcasts.