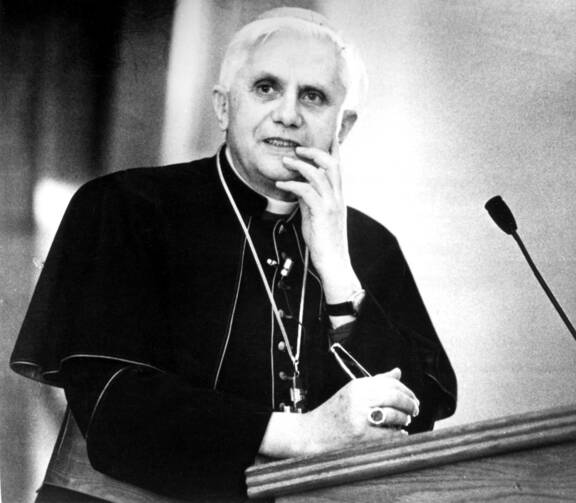 Did you know Pope Benedict XVI once wrote for America? It’s true—when the recently deceased former pontiff was prefect for the Congregation for the Doctrine of the Faith, Cardinal Joseph Ratzinger was invited by America’s editor in chief, Thomas J. Reese. S.J., to respond to a 2001 article by Cardinal Ratzinger’s fellow German, Cardinal Walter Kasper, on the topic of the local vs. the universal church.

Long before he was the prefect of the C.D.F. or the pope, the Rev. Joseph Ratzinger was a scholar.

While doing some archival curating recently in our offices, I found the original letter from Cardinal Ratzinger accepting the invitation from Father Reese (below); perhaps some sentimental staffer saved it back in the day as one of history’s least likely valentines. We also have Cardinal Ratzinger’s response to Cardinal Kasper’s initial article available online. 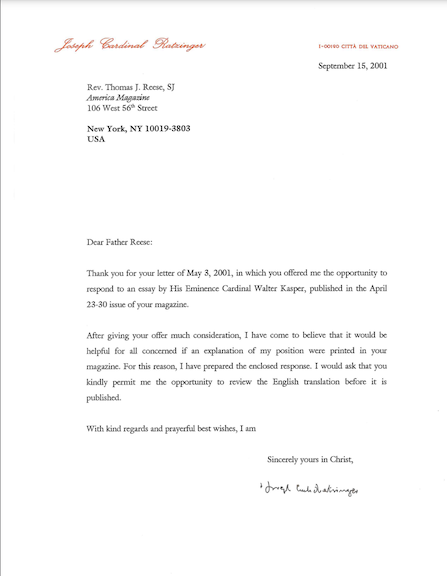 As far back as 1983, Cardinal Ratzinger’s name was appearing in America articles by Father Reese and by Avery Dulles, S.J., in connection with the prefect’s contention that bishops’ conferences have no real teaching authority. Cardinal Ratzinger held that only individual bishops and the collective bishops in cooperation with the pope had such authority, a point with which Pope Francis seems to agree. The C.D.F.’s busy schedule during Cardinal Ratzinger’s tenure there made him a frequent referent in America in the years after, including during Father Reese’s time as editor in chief from 1998 to 2005.

No one thought in 2001 that one day Cardinal Ratzinger would ascend the papal throne; nor would many have predicted that, as Pope Benedict XVI, he would prove a far more pastoral and benevolent figure than his reputation as “God’s Rottweiler” during his tenure as the head of the C.D.F. would have augured. Nor, of course, would anyone have predicted that a sitting pope would resign, as Benedict did in 2013. A pope of surprises, to be sure.

Long before he was the prefect of the C.D.F. or the pope, the Rev. Joseph Ratzinger was a scholar. A peritus (theological adviser to a bishop) at the Second Vatican Council, he was one of a number of theological wunderkinder working behind the scenes, including Karl Rahner, S.J., Henri de Lubac, S.J., Yves Congar, O.P., Edward Schillebeeckx, O.P., and more. (Note the below picture of Fathers Rahner and Ratzinger enjoying a beer and a smoke, because it was the 1960s and why not.) Father Ratzinger released a book in German on the highlights of that council before it even concluded; just a few years later, he released German and English editions of his Introduction to Christianity, an important book in 1968 that still holds up well today.

Even after he was named a bishop and then an archbishop, other books would follow—including a trilogy on the life of Jesus of Nazareth that he wrote during his time as pope (here’s a review of one volume by the famed Scripture scholar Daniel Harrington, S.J.). Benedict had a professor’s heart.

The 2001 essay for America had its roots in an earlier exchange between Cardinal Kasper (president of the Pontifical Council for Promoting Christian Unity from 2001 to 2010 and the bishop of Rottenburg-Stuttgart, Germany, from 1989 to 1999) and Cardinal Ratzinger, prefect of the C.D.F. from 1981 to 2005. In 1999, Cardinal Kasper had published an essay, “On the Office of the Bishop,” to which Cardinal Ratzinger had replied in 2000 with what Cardinal Kasper called “a highly critical stance against my position.” Cardinal Kasper responded in kind in the German Jesuit journal Stimmen der Zeit later in 2000; after Ladislaus Orsy, S.J., translated the essay into English, America published it with permission in April 2001. Cardinal Ratzinger then replied.

In essence, the two were arguing a question whose tensions can be sensed in one of the titles of the pope himself: bishop of Rome.

In essence, the two were arguing a question whose tensions can be sensed in one of the titles of the pope himself: bishop of Rome. In addition to pastoring the universal church, each pope is also the bishop of a specific place, just like every other bishop in the world—with each holding authority over and responsibility for the faithful in his diocese. Do we define the church by its local incarnations in dioceses and parishes? Or do we see it more like Cardinal Ratzinger, who held to “the principle that the universal church (ecclesia universalis) is in its essential mystery a reality that takes precedence, ontologically and temporally, over the individual local churches”?

That universal church didn’t have to be equated with a centralized Roman church, Cardinal Ratzinger argued (even if, as he admitted, that is exactly what many do). But at the same time, if the scriptural metaphor of the church as the bride of Christ were to make sense, he wrote, there has to be one bride and one groom:

The basic idea of sacred history is that of gathering together, of uniting human beings in the one body of Christ, the union of human beings and through human beings of all creation with God. There is only one bride, only one body of Christ, not many brides, not many bodies. The bride is, of course, as the fathers of the church said, drawing on Psalm 44, dressed in many-colored robes; the body has many organs. But the superordinate principle is ultimately unity. That is the point here. Variety becomes richness only through the process of unification.

It is a complex theological argument, touching on ecclesiology and pneumatology as much as Scripture—not to mention gender issues—but it is one with significant consequences for the way the church imagines itself in relationship to God and to creation, and thus operates in ways large and small. Who calls the shots in terms of church teaching and discipline? Who has authority over the temporal goods of the church? Over the sacraments? And for God’s sake, who’s going to decide when and where pro-choice politicians can receive Communion?

Some contemporary scholars would argue that the bride/groom metaphor is just that—a metaphor—and shouldn’t be applied too strictly to the concrete realities of the church in the world, but it remains central to the way the church understands itself: The issue reared its head again just recently in Pope Francis’ wide-ranging interview with America editors in 2021, where he used the metaphor to justify reserving priestly ordination to men.

For Cardinals Ratzinger and Kasper, however, women’s ordination was not the issue (at least not in the aforementioned repartee); rather, the question of where authority lies in the church percolated under their exchange. Note that less than two months ago, Pope Francis downplayed the authority of bishops’ conferences in favor of the role of the local bishop himself: “The bishops’ conference is an organization meant to assist and unite, a symbol of unity. But the grace of Jesus Christ is in the relationship between the bishop and his people, his diocese.” Like Benedict before him, Francis sees himself as a universal pastor—but also as the bishop of Rome.

Pope Francis: “The grace of Jesus Christ is in the relationship between the bishop and his people, his diocese.”

Our poetry selection for this week is “St. Teresa’s Pillow,” by Laura Reece Hogan. Readers can view all of America’s published poems here.