‘The call to priesthood comes from God, not from one’s body parts’: Reactions to Pope Francis’ comments on women’s ordination 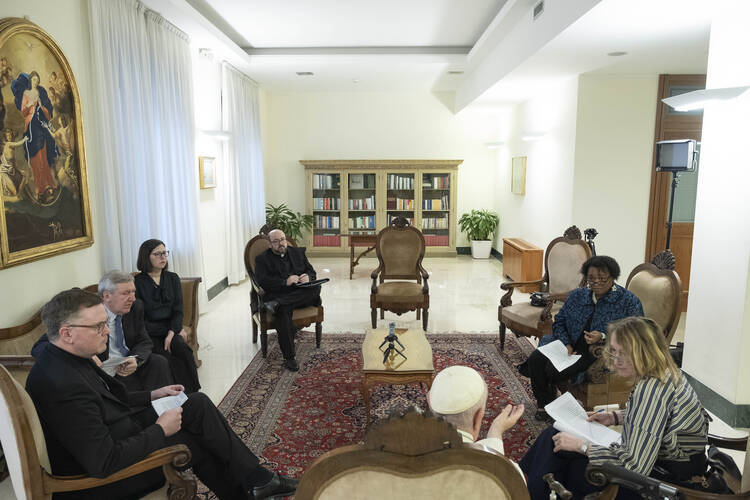 Pope Francis speaks with the editors and staff of America. Translator Elisabetta Piqué at the pope's right (America Media/Antonello Nusca)

Editors' note: On Nov. 22, five representatives of America Media interviewed Pope Francis in his residence at Santa Marta at the Vatican. They discussed a range of issues, including polarization in the U.S. church, racism, the war in Ukraine and the Vatican’s relations with China. The pope’s comments on the ordination of women in particular drew a strong response from readers. “The way is not only [ordained] ministry,” Francis said. “The church is woman. The church is a spouse. We have not developed a theology of women that reflects this.”

Pope Francis was finally asked the question we have always wanted to hear him answer—what would he say to a woman feeling the pain of a sincerely discerned and unfulfilled call to priesthood? Unfortunately, when asked that pastoral question by executive editor Kerry Weber, the pope did not give a pastoral answer. Instead, he gave a clumsy theological discourse on Marian and Petrine theories, which the average Catholic would be forgiven for not knowing by heart, and cast women as creatures with preternatural senses for church administration and sniffing out bad priests.

Francis’ suggestion that “woman is more, she looks more like the church, which is mother and spouse” relies on a literal interpretation of the “spousal metaphor” that reduces the extravagance of one’s relationship with God and discipleship to plastic figurines on a wedding cake. Not just a disservice to the Catholic imagination, this literalism becomes a tool of oppression. The call to priesthood comes from God, not from one’s body parts.

The pope’s meandering defense is unsatisfying to anyone paying attention to the movements of the church today. Francis’ lack of understanding of women’s ministerial gifts stands in jarring contrast with synod reports from around the world, which reflect a collective longing for women in ministry.

The synod has implored the global church to “enlarge the space of your tent.” We cannot continue to allow the institution to build walls of bad theology, decorated with stained-glass abstractions of women, instead of making room to encounter them as incarnate equals in Christ.

"The call to priesthood comes from God, not from one’s body parts."

The Holy Father’s remarks on women’s ordination make a few things clear. Women are not called to the priesthood, but our gifts are still very much needed, and not only around the hearth or in the parish altar society. The influence of women should be felt throughout the church. We are still in the process of discerning how this should happen.

It is beautiful to contemplate the Holy Father’s suggestion that women mirror the church herself in our femininity. Admittedly, though, it is a bit difficult to grasp the implications of this for a young woman trying to discern her vocation in life, and I confess that I also do not entirely understand what he means when he talks about “the Marian principle.” I do understand that in modern societies, women have proven that we have an enormous range of gifts, abilities and interests, far more than has generally been recognized historically. I think the Holy Father sees this too, and is eager to draw on those gifts for building Christ’s kingdom and saving more souls.

Therefore, we need to pray for greater wisdom, individually and as a church. We absolutely do not want young women to feel ashamed of having a wide range of gifts, along with a sincere desire to serve the church. However, they should be encouraged to be open to grace and providential guidance, as they consider how God intends for those gifts to be used. It is not about breaking glass ceilings, but more about building new muscular tissue in the body of Christ.

Rachel Lu is a freelance writer and associate editor at Law & Liberty.

"It is not about breaking glass ceilings, but more about building new muscular tissue in the body of Christ."

Conversations about the vocation of women in the church never seem to move beyond the topic of priestly ordination. While there are certainly some women who experience this tension, most people—women and men alike—do not experience the call to the priesthood. Yet, repeatedly, we return to the same topic even though the tradition and teaching of the Catholic Church continue to maintain that women cannot be ordained priests. I’d like to shift the conversation to something that applies to all of us.

As we get ready to celebrate the birth of Christ, an event which depended completely on a woman, it would be helpful to look at Mary, the mother of God. In the first chapter of the Gospel of Luke, the angel Gabriel appears to Zechariah to tell him that his prayer has been answered: He will have a son. Zechariah refuses to believe. The angel then appears to Mary and gives her an even greater message: She will become the mother of God and she will conceive this child without sexual intercourse. Her message is far greater, far more difficult to understand. And she has more strength than Zechariah—a priest! The future of humanity—our future—depended upon her yes.

In his 2004 letter, “On The Collaboration of Men and Women in The Church and in The World,” Cardinal Ratzinger (the future Pope Benedict XVI) said that women have a role in every aspect of society and that our vocation is to model to the world—including men—how to be the church, how to be the bride of Christ.

This means that every woman, whatever her state in life, is called to model a dynamic reality that’s somewhat nebulous and hard to unpack. Like Mary who was the first teacher of Jesus, we are called to be the primary teacher to all, including men, of how to respond to Christ.

But we spend very little time unpacking this mystery, one that would help us all to live more fulfilled lives. Soon after Christmas, on January 1, we’ll celebrate the Solemnity of Mary, the Mother of God. Perhaps in the new year, we could spend time unpacking the mystery that she holds for all of us.

Pia de Solenni is a moral theologian and ethicist.

"Like Mary who was the first teacher of Jesus, we are called to be the primary teacher to all, including men, of how to respond to Christ."

In the interview with Pope Francis, America’s editors were right to ask a question about women in the church, since in the global synod process “almost all reports raise the issue of full and equal participation of women” (No. 64). However, the editors chose to focus on women and the priesthood, a question that often tempts us into old, tired scripts, and inflames division and discouragement.

Which questions can open up a wider road for us to journey together? The synod’s working document (“Enlarge the Space of Your Tent”), which was fully endorsed by Pope Francis, identifies three specific areas for discernment—women in governance, women preaching and the female diaconate.

The church has a documented history of ordaining women as deacons. The topic emerged at the Amazon Synod in 2019, and the presidents of at least three bishops’ conferences (Australia, Belgium and Germany) support it.

While the priesthood may be rooted in the “Petrine church” that the pope speaks of, the diaconate emerged in response to pastoral needs in the early church, and it included women. Perhaps we can imagine the diaconate as part of a synodal church where the Spirit pours out gifts “upon all flesh” (Acts 2:17) and church leaders encourage the faithful to “receive” women as deacons as St. Paul did with the Christian community in Rome (Romans 16:1-2).

"While the priesthood may be rooted in the ‘Petrine church’ that the pope speaks of, the diaconate emerged in response to pastoral needs in the early church, and it included women."

An institutional expression of the Marian principle

The debate over women’s ordination is deadlocked by polarized camps. On the one side, there are those who see the all-male priesthood as a patriarchal institution that must be dismantled in order to make room for women. On the other, there are those who are so afraid of such a dismantling that they instinctively resist attempts to expand the role of women in the church. Both sides are saying no: either “no” to the church’s longstanding tradition and theology, or “no” to the elevation of women’s influence.

What would it look like to say “yes” instead—to affirm both the male priesthood, including the theology on which it depends, and the real need for women’s guidance at all levels of the church?

This, I believe, is the possibility opened by Pope Francis’ recent remarks. There is a third option that leads out of the deadlock: a structural reform that leans into the theological distinctions of the Petrine and Marian dimensions of the Church, with the goal of strengthening each and cultivating a visible and robust complementarity between them. Pope Francis speaks of the “charism of women.” What would it look like to give that charism an institutional presence, a body entirely distinct from the priesthood—a commission of women, lay and religious, who could advise the Holy See on matters pertaining particularly to women, and whose presence could help counteract the insularity of an all-male hierarchy?

Francis’ recent reforms of the Roman Curia have opened the door for non-clergy (lay people and religious) to oversee dicasteries within the Vatican; he has also elevated the presence of women in administrative roles. Yet the Marian principle, which Francis highlights alongside the Petrine principle, does not have a clear institutional expression in the current structure of the church hierarchy.

What would it look like to create one? Not as a competitor to the priesthood, but as its complement? Such a visible synergy would not abandon the grounding theology of the nuptial mystery; rather, it would deepen our fidelity to it.

Abigail Favale is a professor in the McGrath Institute for Church Life at the University of Notre Dame.