Review: Water is essential for life. Katy Carl’s debut novel reminds us that God is, too. 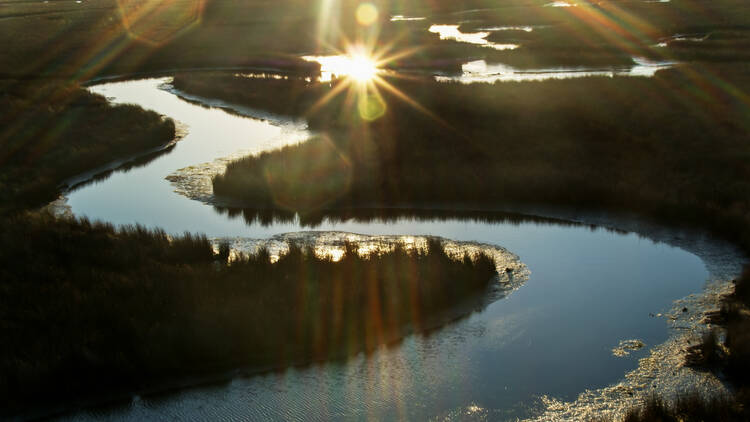 For life on Earth and for human life in particular, water is essential. About 71 percent of the Earth’s surface is water. Similarly, the human body is composed of 70 percent water. While the human body can endure a month without food, it can go only a week without water. Likewise, all plants and animals need water to survive. In other words, all of creation depends upon water.

As Earth Without Waterby Katy Carl

Katy Carl’s debut novel, As Earth Without Water, presents a trinity of epigraphs before its story begins. The first is from Psalm 142: “I stretched forth my hands to Thee: my soul is as earth without water unto Thee.” The other two quotes—about thirst and vision—come from the writer Marcel Proust and the painter Matthew Kirby. But the psalm is the true thesis, or lynchpin, for the stories of the novel’s main characters, Dylan Fielding and Angele Solomon.

Carl’s novel is about coming “through the waters” of life with all its floods and storms. At the same time, it is about slaking thirst—finding a well in the desert.

The psalm tells readers up front that this is a story about people like the psalmist, reaching out a hand—oftentimes blindly or out of desperation—to God. The characters do not always know this, of course, like any person who seeks understanding and meaning in life. But something in the soul knows. The soul knows its source. And it knows that it cannot survive without “Thee,” just as life on Earth cannot survive without water.

Carl’s novel is about coming “through the waters” of life with all its floods and storms. At the same time, it is about slaking thirst—finding a well in the desert. Or, like the Gospel story of the woman at the well, it is about understanding that there is such a thing as living water.

Dylan and Angele, the story’s narrator, met one another in college, where they both studied art (painting, specifically). Moving back and forth in time from when the two knew each other in school to when they studied abroad in Italy to a period spent living (and struggling) in New York, then back to Chicago, then to a monastery and then to the present, the story covers a lot of ground. Readers piece together the period of young adulthood in which Dylan and Angele have been seeking meaning in their lives, looking for it in different cities and spaces. Both of them are seeking a true home, a sense of belonging and true love. They seek to be seen and known.

For both of these characters and for the book as a whole, water is a focal point. Water can represent new life, but also destruction. It can signal being made clean, and yet also emptiness. In Christianity, water can bring to mind anything from the flood and Noah’s ark to Moses parting the Red Sea, or John the Baptist telling his followers that he will baptize with water but the one coming after him will baptize with the Spirit. Then there is Christ on the cross whispering, “I thirst.” And there is his time in the desert when he was tempted—in a place with very little water.

When readers meet Angele early on in the novel, in July 2010, they learn that she has sold her artistic soul to an ad agency in Chicago—something she said she would never do. Dylan unexpectedly shows up to her office after a long period spent apart, which brings old memories to the surface for Angele. But before those are explored, the story flashes forward to November 2015. This time, the setting is in a monastery in rural Kentucky, where Dylan is a novice with the name Thomas Augustine.

Dylan and Angele’s bond, though it has changed form over the intervening years, is centered on their shared passion for painting. As the story flashes back once again to July 2010, Angele thinks to herself that “there is love or something like it in brushstrokes.” This is another theme throughout the novel, as Carl considers the ways that acts of creativity, like painting (and all true art) participate in something divine.

Both Angele and Dylan have a deep longing to create something lasting and to be part of this sacred artistic tradition, though they might not think of it in those terms. They simply feel a deep tug pulling them upward and at the same time inward. In one of the chapters that takes readers back to Dylan and Angele’s semester studying in Italy, their beloved instructor, Signora, admonishes Angele. (At the time, Angele is considering quitting painting because she thinks Dylan is the better artist).

For both of Carl's main characters and for the book as a whole, water is a focal point.

Signora says: “Think of Caravaggio and Artemisia Gentileschi. She was not less capable, she may have been more so: and then consider what radical limitations she had to work against. Consider what she achieved despite them, because of them, because of her need to struggle. Can you justify, to yourself, doing less?”

For a long time, it seems, the answer is yes. Angele can justify to herself that she is not cut out to be an artist and that her work at the ad agency is necessary, even though her soul senses this is a lie. Much later in the novel, Angele says, “There aren’t new worlds to build. There’s only this one to do with it what we can.” When she says this, she is much more assured of her place in the world and of her limitations, but also her strengths. She is also no longer afraid.

Christopher Beha left the Catholic church and then came back. Now he’s writing a book about why.
Mary Grace Mangano

From ‘Mr. Brightside’ to ‘Pressure Machine,’ The Killers are still singing about God.
Mary Grace Mangano

This gets at another one of the novel’s themes: freedom. In the middle of the story, Angele wonders, “If the freedom we knew then was not freedom, but mere liberty, then what must real freedom be?” Here’s where art, once again, provides some of the answers. She recalls Ruskin’s The Elements of Drawing, a text that Dylan and Angele read during their studies. It explains, “It is easy to draw what appears to be a good line with a sweep of the hand, or with what is called freedom; the real difficulty and masterliness is in never letting the hand be free, but keeping it under entire control at every part of the line.”

Both Dylan and Angele must learn this lesson with some difficulty. Although it was part of an introductory course, it is hardly simple. The two characters realize that it might appear to be easy to “draw a good line” or live a good life—a life of meaning—but in fact, it requires expert control to do so. And where or how that can be found surprises both of them.

Toward the end of the novel, Dylan gives Angele a fragment from a Dunstan Thompson poem:

As for water, we have our own wells here.
This ordered life is not for everyone,
Never, to their surprise, for those who run
Away from love.

These lines bring together many of the themes of Carl’s novel: the symbolic importance of water as representative of what is essential to the soul, freedom found in order, and love that seeks each and every person on Earth.

As Earth Without Water traces Dylan and Angele’s love and friendship over the years. Carl takes readers to the roots of a greater love story playing out in their lives, in ways unknown to both of them. This story is appreciated most at its conclusion and invites readers to reread with new eyes. Having understood the undercurrent of love—the living water—beneath the individual lives of Dylan and Angele, readers will want to go back to the beginning to see the quiet, slow growth of this love all over again.

This article also appeared in print, under the headline “Thirsting for Love and Meaning,” in the September 2022, issue.