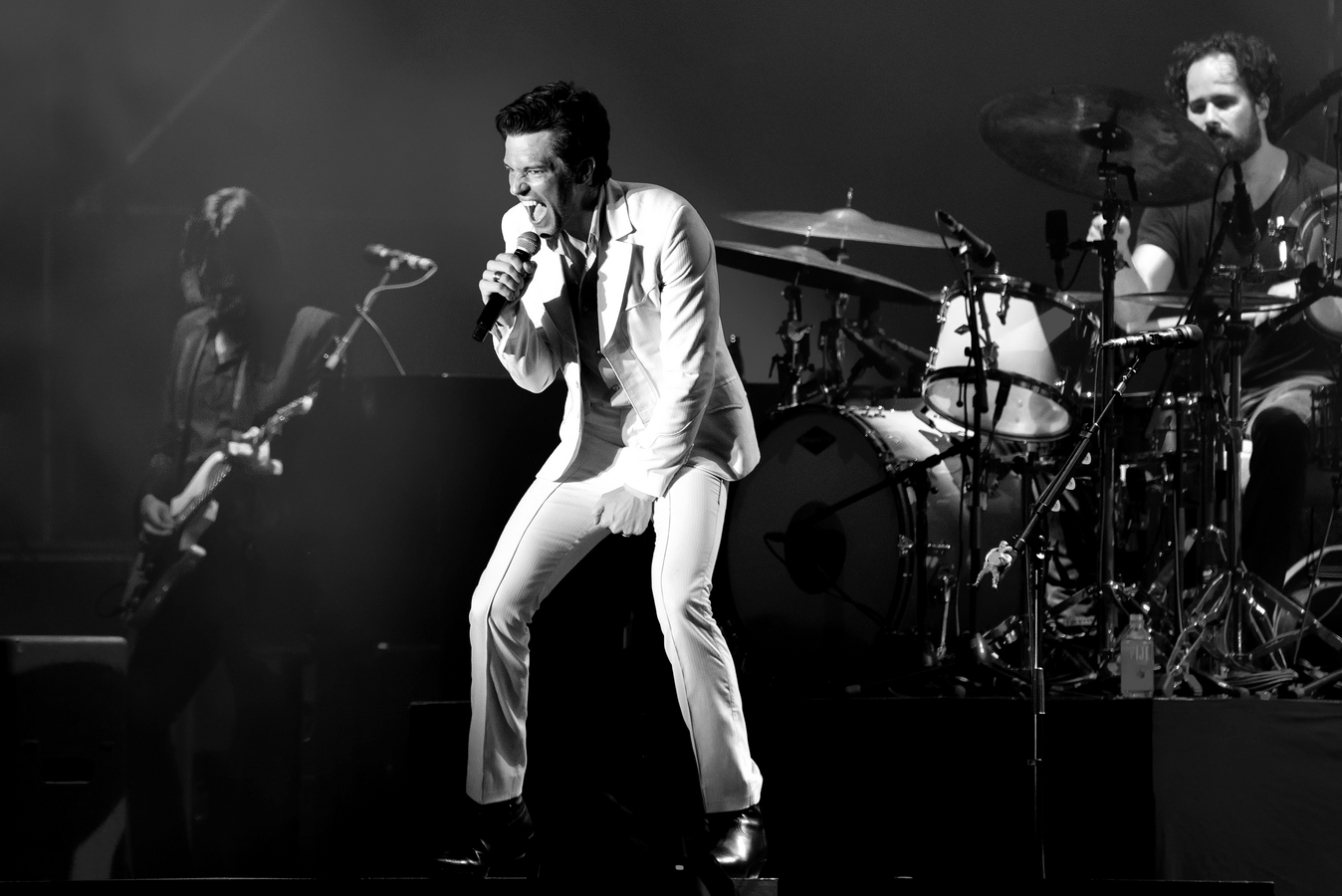 From ‘Mr. Brightside’ to ‘Pressure Machine,’ The Killers are still singing about God.

Probably the most well-known song by the Killers is the first single they ever released, “Mr. Brightside.” This song came out in 2004 along with their debut album “Hot Fuss.” The chorus cries:

Jealousy, turning saints into the sea
Swimming through sick lullabies, choking on your alibis
But it’s just the price I pay, destiny is calling me
Open up my eager eyes, ’cause I’m Mr. Brightside

After listening to the Killers’ two latest albums, I found myself going back to this song with curiosity, the chorus in particular. How could I have missed that it mentions saints and claims that “destiny is calling”? Now I notice that the speaker in the chorus asks to have his eyes opened—to the reality of pain and suffering in the world, but also to the path laid out before him.

On their last two albums, the Killers continue to circle around faith and eventually grasp it—if not in completely solid form.

These same themes are explored in a much more overtly spiritual and direct way in two albums released by the Killers in 2020 and 2021: “Imploding the Mirage” and “Pressure Machine.” The band’s lead singer and keyboardist, Brandon Flowers, is a member of the Church of Jesus Christ of Latter-day Saints and lives in Nevada and Utah. The songs on “Mirage” and “Pressure Machine” see him reflecting on his upbringing, as well as the deeper implications of living in America with a religious worldview.

“Imploding the Mirage” has an ethereal album cover of cloud figures over an American pastoral scene, and it begins with the song “My Own Soul’s Warning.” Its second stanza contains a number of rhetorical questions:

If you could see through the banner of the sun
Into eternity’s eyes, like a vision reaching down to you
Would you turn away?
What if it knew you by your name?
What kind of words would cut through the clutter of the whirlwind of these days?

It ends with the line “I just wanted to get back to where you are.” Without naming God outright, this seems to be about him. And this sets the tone for the rest of the album. The songs continue to circle around faith and eventually grasp it—if not in completely solid form, then at least its foundations. The progression appears to begin with the soul’s warning, or realization, that what the speaker wants is to get back to a relationship with God and then slowly, steadily follows this impulse.

Again, God isn’t named, but the speaker seems to address him. And a change has occurred: With the statement “Here I am,” God can enter in through the space this declaration allows. And he does. The very next song, “Running Towards a Place,” begins with this stanza:

Give me the eyes that I may see
The good in my people and the trouble in me
Give me the hands that I may lift
The weight of another who’s starting to drift.

This sounds again like prayer, maybe even St. Patrick’s Breastplate or the prayer of St. Francis. “Running Towards a Place” also contains lines such as “And if we’re running towards a place/ Where we’ll walk as one/ Will the hardness of this life/ Be overcome?” and “Can you see the world/ In a grain of sand?/ Can you find heaven in a wildflower/ Hold it in the palm of your hand?”

This is someone grappling with what it truly means to help build God’s kingdom on earth, and to hope for heaven “where we’ll walk as one.” Seeking answers, the singer wants to know that “the hardness of this life” will truly be overcome. And yet, paradoxically, a person of faith knows that we cannot know this. We can only have faith that it is true.

This is someone grappling with what it truly means to help build God’s kingdom on earth, and to hope for heaven “where we’ll walk as one.”

God is overtly named in “My God” (featuring Weyes Blood). The speaker is “crawling back to your arms” and begs “from your mouth to my heart.” The speaker claims that “big love cannot be understated” and that “control is overrated.” This sounds like surrender to me, especially as the song ends by repeating one line three times: “My God, it’s like the weight has been lifted.” While perhaps unconvinced in some ways, this voice at least wants to believe in God and hold onto faith.

The final song is “Imploding the Mirage.” Throughout the songs that came before it, the “mirages” of a life without God have been poked at, prodded. They can’t stand and so faith is reclaimed, even if it’s in a shaky form.

Enter “Pressure Machine,” the album the Killers put out earlier this year. The cover is a stark contrast from “Imploding the Mirage,” but its songs explore the same themes more deeply. The cover of “Pressure Machine” is completely black-and-white, portraying three crosses behind barbed wire. And the album does not shy away from tough material; domestic abuse, addiction and overdose, adultery, disenchantment with the American dream, and economic hardship are all covered.

The first song, “West Hills,” begins with recorded voices of real, small-town citizens, and the first stanza is:

I was born right here in Zion, God’s own son
His Holy Ghost stories and bloodshed never scared me none
While they bowed their heads on Sunday
I cut out through the hedges and fields
Where the light could place its hands on my head
In the West Hills.

The song tells the story of someone who goes to jail for having “possession of them hillbilly heroin pills” and yet it still offers hope of redemption. The speaker sings:

And if there really is a judgement
When He pulls my chart
He’ll reject my actions
But He will know my heart
And He’ll prepare a place for me
Where happiness instills
And the light puts its loving hands on my head.

If the characters from the songs on “Imploding the Mirage” found faith, then this album follows them into their lives and explores what it reallymeans to live with faith, especially in small-town America, where Christianity has been often tied to the American dream and belief in both is often tested.

These good people are not saved from pain and suffering. Why not?, the album wants to know.

Many of the songs deal with death, which comes in various forms—even speeding trains. These tragedies are presented and juxtaposed next to the statement, from the song “Quiet Town,” that “Good people who lean on Jesus, they’re quick to forgive/ In this quiet town.” And yet these good people are not saved from pain and suffering. Why not?, the album wants to know.

The song “Terrible Thing” is about a town rodeo where the bull gores a young boy to death, but at the same time, in the same town, the first-person narrator of the song is on the verge of suicide. He sings:

Around here, we all take up our cross and hang on His holy name,
But the cards that I was dealt will get you thrown out of the game
Hey momma, can’t you see your boy is wrapped up in the strangle silk
Of this cobweb town where culture is king?
I’m in my bedroom on the verge of a terrible thing.

How can faith save someone in this desperate place?, the song wonders. How can some things be glorified and other tragedies stay hidden?

In another song that reckons with God’s promises and life on earth, “Cody” asks, “So who’s gonna carry us away?/ Eagles with glory-painted wings?/ We keep on waiting for the miracle to come.” Here, faith is tested once again and the speaker still waits for a savior. Prayers go unanswered, or are met with sadness or silence. And those left in the wake of suffering must decide where they stand.

Despite the everyday horror in these stories, there is also the mantra from “Sleepwalker” that echoes back to “Mr. Brightside.” The song’s narrator compels some other person—someone sleepwalking through life—to be awake to the beauty of life even in the midst of death, decay and devastation. “We picked you wildflowers/ You gotta open your eyes,” he says. This line reminds me of Matthew 6:25, where Jesus, in his Sermon on the Mount, tells his followers not to be anxious about what will happen to them, but to “consider the lilies of the field.”

The album doesn’t end in an uplifted place, but it does hold onto some hope.

The album doesn’t end in an uplifted place, but it does hold onto some hope. With one foot in a life of keeping the peace so that “she’ll cook my eggs in bacon grease,” and one foot angling toward heaven, the song “Pressure Machine” claims that “Hope’ll set your eyes agleam/ Like four feet dangling in the stream/ But the Kingdom of God, it’s a pressure machine.” This acknowledges that arriving at God’s kingdom isn’t easy, and that enduring this life is an unavoidable requisite to entry. The narrator marvels at the ways time slips by quickly and also at our smallness when he says, “Sometimes I look at the stars/ And think about how small we are/ Sweating it out in the pressure machine.” This implies that life on earth involves “sweating it out”—through pain, suffering, tragedy, mundanity—until we reach heaven. Perhaps some might see this as God’s cruelty. Others will see it as the narrow gate.

Back in 2004, the Killers saw mostly the ugliness of life through the jaded and frustrated eyes of “Mr. Brightside.” Yet they felt the pull of destiny and plowed forth with opened eyes to arrive at “Imploding the Mirage” and “Pressure Machine.” In “The Getting By,” the final song on “Pressure Machine,” a more mature version of Mr. Brightside seems to say that people simply need to show up for their lives every day and “hold on till the getting’s good.”

The song begins by commenting on one of God’s promises when it says, “You know I believe in the Son, I ain’t no backslider/ But my people were told they’d prosper in this land.” This suggests that life has been difficult and prosperity, especially in small-town America, is still out of reach. It seems to throw this in God’s face to say—remember what you promised?

Yes, a person could get swallowed up by dwelling on this—on what seems to be a broken promise. But—and here’s the hope—“maybe it’s the stuff it takes to get up/ In the morning and put another day in, son/ That keeps you standing where you should/ So put another day in, son, and hold on till the getting’s good.”

Keep going, the song bids listeners. They want us to keep standing where we are, rising each day, even when it involves unfathomable awfulness, because there is hope of life with God on the other side.