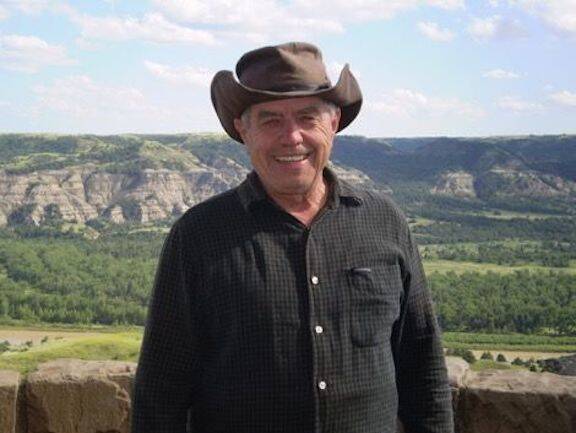 Larry Woiwode, North Dakota Poet Laureate, died on April 28, 2022. He is pictured here in the Badlands of his home state. (WIkimedia Commons)

What were the greatest English-language novels of the 20th century? Many would answer with the perennial favorites that were also often required reading in high school or college; some will always answer with great fervor that it is Infinite Jest and there can be no further argument; others insist on Ulysses, which they haven’t read. But who picks Larry Woiwode’s Beyond the Bedroom Wall?

More critics than you’d think. Woiwode, who died on April 28 at the age of 80, sold millions of books but also earned the admiration of many literary heavy hitters. In a 1975 review of Beyond the Bedroom Wall for The New York Times, the novelist John Gardner called the novel, a finalist for the National Book Award that year, “simply brilliant” and an “enormous intelligent novel.” Moreover, he added, “nothing more beautiful and moving has been written in years.” The famed book critic Jonathan Yardley included it in a 1982 list of the 22 best American works of fiction of the 20th century—a list that left off Kate Chopin, Caroline Gordon, Norman Mailer, Thomas Pynchon, J.D. Salinger and John Updike.

What were the greatest English-language novels of the 20th century? Does the list include Larry Woiwode's Beyond the Bedroom Wall?

Beyond the Bedroom Wall, a 600-page story of a Catholic farm family in North Dakota told over four generations, was neither Woiwode’s first critically acclaimed work nor his last. His debut novel, What I’m Going to Do, I Think, was also a finalist for the National Book Award and received the William Faulkner Foundation Award for the best first novel of 1969; among other honors he received were a Guggenheim Foundation Fellowship and the John Dos Passos Prize. He published several more novels, poetry, short story collections, memoirs and biographies over the years, and was also the Poet Laureate of North Dakota from 1995 until his death.

Born in 1941 in North Dakota, Woiwode attended college at the University of Illinois Urbana-Champaign and then moved to New York City. (He initially tried his hand at acting and was cast in a play, “Three Blind Men,” alongside another arriviste who stuck with the craft: Robert DeNiro). A friendship with another Urbana-Champaign alumnus, the longtime (and I mean longtime, 1936 to 1975) fiction editor of The New Yorker, William Maxwell, helped Woiwode to get his foot in the door; Maxwell was Woiwode’s great champion during his penniless early days in the big city and also his editor. A reviewer of Woiwode’s later works noted that “without the lean blue pencil of William Maxwell at The New Yorker to guide him, some of his later stories’ prolix weightiness needs a bit more watching.”

Those early stories put Woiwode on the literary map; What I’m Going to Do, I Think came soon after, along with a book deal for what would become the best-selling Beyond the Bedroom Wall, which saw the light of day only after an anguished five years of writing that almost wrecked Woiwode’s marriage to his wife, Carole.

In 1978, Woiwode gave up his position as a professor of creative writing at Binghamton University to move back to North Dakota, where he farmed and raised quarter horses, writing in the meantime in an old barn on his 160-acre property outside Mott, N.D. His reflections on that life are captured in two memoirs, What I Think I Did and A Step From Death. In a 2008 review in America, Ron Hansen called the latter “a fascinatingly intimate memoir, peppered with gruff opinions and kitchen table reminiscence, but also full of wisdom, generosity, humility, love of wife and family and reverence for the earth.”

Raised Catholic (and included in more than a few roundups of “American Catholic novelists” over the years), Woiwode eventually became a member of the Orthodox Presbyterian Church.

The earlier memoir, What I Think I Did,Hansen wrote in a 2000 review, was “a gracious homage to old friends and mentors who guided and challenged him, a slyly humorous reminiscence of the naïve excitements and exertions of youth, a lyrical portrait of the hardships and pleasures of family and farm life on the Great Plains.” Hansen also noted “the great gulf between the hard-drinking, clothes-loving tyro of St. Mark’s Place and the stoic farmer of deep religious convictions who is the author of these graceful pages.”

"His grand move to a ranch in North Dakota and his relative poverty there—he once burned his complete collection of Charles Dickens' books because he ran out of firewood—spoke of a faith-filled, sternly dedicated, and totally committed writer, the like of which seems to belong to another age," Hansen told me in an email. "We will miss him."

Woiwode's religious convictions are most clear in two of Woiwode’s books: Acts, a 1993 reflection on the Book of Acts as well as a complex reflection on Christianity, belief and the writing life, and the 2013 collection of essays, Words for Readers and Writers. Raised Catholic (and included in more than a few roundups of “American Catholic novelists” over the years), Woiwode eventually became a member of the Orthodox Presbyterian Church. He described his North Dakota congregation in the closing pages of Acts in spare but loving prose:

The building in which we worship is plain and unadorned, with a raised platform within an alcove where the pulpit stands, and to the left of the alcove is a door (EXIT, the sign above it says, to confound Sartre) leading to a room where children’s classes are held. On sunny winter or spring or summer mornings, or those days of supernatural clarity that signify the fall, when the door is inadvertently left open, I’m able to see out a rear window to the ascending plain in its conjunction with the sky, blue against green or gold or white, depending upon the season, and my inner considerations seem less important than this picture of heaven over earth—a narrow demarcation of the narrow interim in which we carry out our present-day acts.

Many of Woiwode’s later essays include criticisms of the way Christianity is disdained by U.S. cultural elites, and he was open in Words for Readers and Writers about bias against Christian fiction in the publishing industry. When The New Yorker declined to publish any of Woiwode’s more explicitly Christian novel Poppa John, citing it would require a “shift in New Yorker policy,” Woiwode had an acid observation: “the magazine could not appear to condone a serious expression of Christianity.”

"If Christianity is not allowed fair and free exercise, then the orphan knocking at your door, as Bob Dylan sings, is not only wearing the clothes that you once wore but informing you he isn't your orphan anymore," Woiwode wrote in the same essay. "The stick-figure reject of the media and the target of stale jokes, the person of faith forms the largest homeless segment in the United States—70 percent of the population, strangers and pilgrims here."

In this space every week, America features reviews of and literary commentary on one particular writer or group of writers (both new and old; our archives span more than a century), as well as poetry and other offerings from America Media. We hope this will give us a chance to provide you more in-depth coverage of our literary offerings. It also allows us to alert digital subscribers to some of our online content that doesn’t make it into our newsletters. Last week we announced the winner of the 2022 Foley Poetry Contest: Lisa Mullenneaux, for her poem “In Copenhagen.” Congratulations! Readers can view all of America’s published poems here.