Review: ‘The Agitators’ vindicates three women who ended up on the right side of history 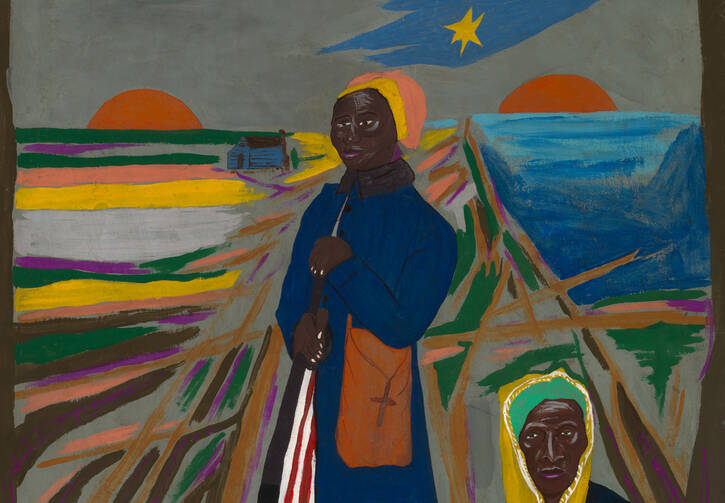 Once-revered figures from Christopher Columbus to Abraham Lincoln are under intense historical scrutiny these days as we engage in a national discussion about how to acknowledge the ways past words and deeds have shaped the deeply flawed world we live in. This process can be divisive and painful, but it has also vindicated some of history’s more farsighted figures, such as the abolitionists who opposed slavery before the bloodletting of the U.S. Civil War.

Recent works like the TV series “The Good Lord Bird” and “The Underground Railroad,” as well as books like Bruce Levine’s biography of Thaddeus Stevens and David S. Reynolds’s massive cultural history, Abe: Abraham Lincoln in His Times, offer extended portraits of these activists, who ended up on the right side of history.

Add Dorothy Wickenden’s inspiring The Agitators to this list.

Coming of age on a Maryland plantation, Harriet Tubman later wrote that she often spoke to God “as a man talketh with a friend.”

In this study of (to use Wickenden’s subtitle) “Three Friends Who Fought for Abolition and Women’s Rights,” the executive editor of The New Yorker explores 19th-century intersections of class, racism and patriarchy through the lives of the escaped slave Harriet Tubman and the activists Martha Wright and Frances Seward. The latter two “transform[ed] themselves from conventional homemakers into insurgents,” according to Wickenden, while Tubman “repeatedly risked her life...to guide some 70 enslaved people” to freedom.

Harriet Tubman, Wickenden writes, lived her life expressing “how it was to be enslaved, and...what I did about it.” Coming of age on a Maryland plantation, Tubman later wrote that she often spoke to God “as a man talketh with a friend,” alternating between bafflement and rage, praying that her enslavers, and her country, would change their ways.

They didn’t. And so, on the night of Sept. 17, 1849—with the aid of parents who were familiar with the Underground Railroad—Tubman fled, beginning her life of fearless advocacy for African American men and women.

At the same time, Martha Wright—along with fellow organizers like Elizabeth Cady Stanton and Lucretia Mott—was assessing the impact of the trailblazing convention for women’s rights in Seneca Falls, N.Y., in July 1848. Most of the 300 attendees “had long been abolitionists” as well as “supporters of women’s rights,” Wickenden notes.

Then there was Frances Seward, who had just moved with her two children to Washington, D.C., where her Whig husband was launching one of the more illustrious political careers of the mid-19th century. “Members from the South,” Wickenden writes, “equated [U.S. Senator William Seward’s] position on slavery with that of ‘ultra’ abolitonists.” Frances Seward was arguably even more vociferous in her opposition to slavery—and the family paid a price.

She lived in fear for her husband’s life (a $500 bounty was placed on William’s head), and not one but two family dogs were poisoned.

The Agitators is most compelling as Wickenden guides readers through the bloody, tumultuous 1850s. In March 1854, the same year many Whigs and abolitionists joined the new, anti-slavery Republican Party, newspapers were filled with headlines about “Bleeding Kansas.” Two years later, “one of Frances’ dearest friends,” Senator Charles Sumner of Massachusetts, gave a long anti-slavery speech and was promptly beaten unconscious on the Senate floor by Congressman Preston Brooks of South Carolina.

During these volatile years, Wright and Seward were neighbors in upstate Auburn, N.Y. Then Tubman—though still a fugitive slave—purchased a nearby home from the Sewards, which explains why present-day visitors to Auburn’s Fort Hill Cemetery can find, “almost hidden in the landscape,” the graves of all three of these trailblazers. Women “with no evident power to change anything” nevertheless became, in Wickenden’s impressive telling, “co-conspirators and intimate friends—protagonists in…the second American revolution.”

Unfortunately, once it became clear that suffrage and related rights for Black men, but not women, would be prioritized after the Civil War, this once-formidable equal rights coalition started to break down. Frustrated feminists like Elizabeth Cady Stanton contrasted the “pauperism, ignorance, and degradation” of former slaves with the “wealth, education, and refinement” of white women.

In what Wickenden calls a “scorching rebuttal,” the longtime ally Frederick Douglass said: “When women, because they are women, are hunted down through the streets...when their children are torn from their arms and their brains dashed out upon the pavement...then they will have an urgency to obtain the ballot equal to our own.”

All of this lends Wickenden’s book not just an air of tragedy, but also relevance for activists today. To what degree can—or should—discrete groups build coalitions? And what happens when they can’t? Or don’t? Or won’t?

In the face of grave postwar disappointment, all three of Wickenden’s protagonists nevertheless fought on. “We feel that at this hour,” declared Wright at the founding of the new American Equal Rights Association in 1866, “our highest claims are as citizens, and not as women.”

In the face of grave postwar disappointment, all three of Wickenden’s protagonists nevertheless fought on.

One major failing of The Agitators is that it is merely the latest work to steer clear of one crucial abolitionist tendency—hostility to another marginalized, dispossessed population, Catholic immigrants—that also had far-reaching consequences. During the 1850s, Northern hotbeds of Republican abolitionism, like Boston, Brooklyn and Philadelphia, were radically transformed by these new immigrants. But as Leslie Woodcock Tentler noted in her recent survey of American Catholics: “That popery and slavery were parallel systems of despotism was a favorite abolitionist trope.” (The Sewards, to their credit, were quite sympathetic to immigrants, Wickenden notes.)

It is certainly another historical tragedy that poor European immigrants joined the pro-slavery Democratic Party, in a devil’s bargain that granted them a few of the more modest privileges of “whiteness.” The most gruesome illustration of their support of the Democrats’ position was the 1863 Draft Riots, when, as Wickenden writes, “poor Irish and German immigrants” lashed out in racist (and anti-conscription, anti-Republican, anti-elite) violence.

In an age of insurrections and culture wars, Joyce and Faulkner are increasingly relevant
Tom Deignan

But what exactly did Republicans offer immigrants as an alternative, other than hateful screeds about slums and nuns? This alignment with the Democratic Party as millions more immigrants poured into U.S. cities was central to American politics for at least a century, and (it could be argued) still influences a wide array of contemporary political and cultural conflicts.

Even as we take deep revisionist dives into America’s past—and witness new spasms of nativism in the present—too many historians avoid the complex consequences of yesterday’s immigration. The New York Times recently ran an opinion column about the “real story” of the 1863 Draft Riots without a single reference to immigration, religion, nativism, poverty or party affiliation.

None of which detracts from the accomplishments of Dorothy Wickenden or her admirable “agitators.” Without them and their activism, the “real story” of American justice and equality cannot be told.

This article also appeared in print, under the headline “Abolition Activists,” in the June 2022, issue.

Tom Deignan has written about history for The New York Times, The Washington Post and The National Catholic Reporter. He is working on a book about the United States during the Ellis Island years.