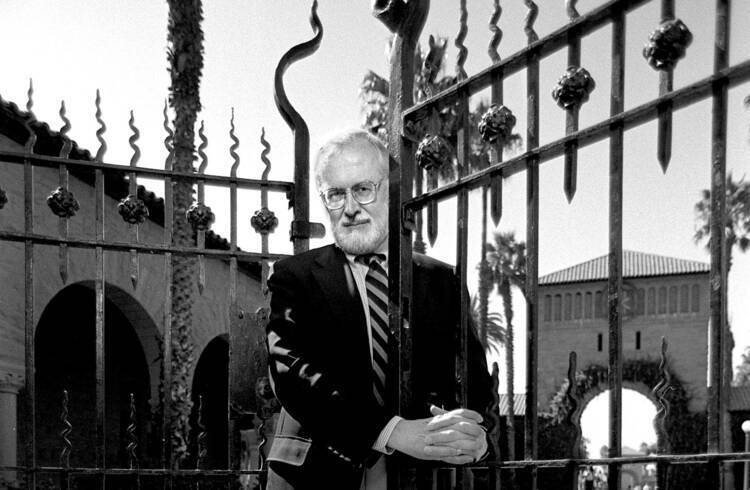 John L’Heureux, the prolific novelist, short story writer and poet, died three years ago this week in Palo Alto, Calif., at the age of 84. Famous for his novels (including The Shrine at Altamira, The Handmaid of Desire and The Medici Boy, among many others) and short stories that regularly appeared in The New Yorker and The Atlantic Monthly, L’Heureux was a professor of English at Stanford University for 36 years and directed the Stanford Writing Program for 11. His former students are among the nation’s leading novelists, poets and literary critics.

He was also for a time a Jesuit priest, though one with a quixotic history. He entered the Society of Jesus in 1954 (”I was the last generation whose classes were taught in Latin,” he once wrote) and quickly earned a reputation for his literary talent—one not always appreciated by his superiors. On his first day of teaching high school as a Jesuit scholastic, he told me in a 2018 email conversation, the rector of the community told him, “‘We're watching you. We know you write poetry, and publish it, and we've been warned about you.’ That was my first-day welcome to Fairfield Prep.”

From John L’Heureux's eucharistic prayer: "You have chosen us to be your children, you have called us to a life of joy and love; you have given us your beloved Son.”

His first book of poetry, Quick as Dandelions, was published in 1964 and was quickly followed by two more books of poems and a memoir, Picnic in Babylon. (Readers of a certain age may recall L’Heureux’s unmatchable description of the famously tall and lanky Avery Dulles, S.J., as “an incredible man: all bony and elongated, made of rake handles and broomsticks and old umbrellas.”) After ordination in 1966, he briefly studied for a doctorate in English at Harvard, but dropped out to become an editor at The Atlantic Monthly. “There I was, on the cover of Jesuit News, as a modern Jesuit who worked as an editor all week but took parish calls on the weekend,” he told me in 2018. “I was briefly acceptable.”

L’Heureux left the Jesuits and the priesthood in 1971. He remained prolific as a writer, though one journal in particular seemed not to care for his work. “When, having left the Jesuits, I began bringing out a novel each year, I seem to recall America was there to let its readers know that my work was disappointing,” he told me. Nostra culpa, nostra culpa, nostra maxima culpa, John.

But his memories of his time in the Jesuits, he told me, were mostly fond ones. “There are also the great men I lived with, including the astro-physicist Provincial who saw me out,” he recalled, “and the quiet saints I lived with of 17 years.”

Upon his death, America asked the prominent novelist and short story writer Tobias Wolff, who had studied under L’Heureux at Stanford, to offer a reflection on his former teacher. This adaptation of Wolff’s introduction to Conversations with John L’Heureux, by Dikran Karagueuzian, appeared in America a week after L’Heureux’s death. “In reading his work, one can see, feel, the demands he makes on himself for exactitude, essence, emotional honesty, aesthetic freshness, digging deep for the truths of our thoughts and desires and presenting his findings without flinching,” Wolff wrote, “even—no, especially—when they challenge our self-conceptions and certainties, and trouble the heart.”

"What were the paths that led him to this life, what surprises did he encounter along the way, what encouragements, what impediments and distractions, disappointments and joys?"

“When you read a novel like An Honorable Profession or The Shrine at Altamira, a short story like ‘The Anatomy of Bliss’ or ‘Roman Ordinary,’ you can’t help wishing you could sit down with the writer, ask him how he came to write such a work, how he came to write at all,” Wolff wrote. “What were the paths that led him to this life, what surprises did he encounter along the way, what encouragements, what impediments and distractions, disappointments and joys? What has he learned about the art he has practiced so well and for so long, and what has he learned from it?”

One of L’Heureux’s early publications had been somewhat lost to history: an experimental eucharistic prayer that was published in America in 1967. How it came about is an odd story, and one that requires some understanding of U.S. Catholic culture in the 1960s.

After the bishops at the Second Vatican Council approved the liturgical constitution “Sacrosanctum Concilium,” theologians and liturgists in various linguistic groups around the world began to seek out how best to address the concession allowing for use of the vernacular at Mass. Europeans led the way, but English-speaking Americans were no slackers: A 1969 book edited by Robert F. Hoey, S.J., The Experimental Liturgy Book, lists 36 new eucharistic prayers among its hundreds of new options for an English-language liturgy.

In 1967, the Vatican gave the bishops of the United States permission to formulate new canons for the Mass in the vernacular. In response, America associate editor C. J. McNaspy, S.J., (if you refuse to believe I didn’t make up a person named C. J. McNaspy, S.J., your suspicions will not be assuaged by this photo I found of him) asked two Jesuit writers to contribute eucharistic prayers to the conversation. Rather than stolid word-for-word translations of the Latin text, McNaspy and friends were looking for “theologians with a gift of words, and poets who know liturgical theology.” They found two in Donald Gelpi, S.J., and John L’Heureux, S.J., the latter only ordained a year. America published both in its May 27, 1967 issue.

One of L’Heureux’s early publications had been somewhat lost to history: an experimental eucharistic prayer that was published in America in 1967.

L’Heureux’s prayer would be recognizable to us today, though with certain inflections that hint both at his own theology and of the mise en scène in which he lived. (That continuity wasn’t always true; things got a little squirrely at times in the late 1960s, liturgically speaking.)

In his eucharistic canon, the emphasis on sin and atonement is toned down, with L’Heureux preferring phrasing like “You have chosen us to be your children, you have called us to a life of joy and love; you have given us your beloved Son.” Jesus, in L’Heureux’s conception, comes not to judge the living and the dead, but “to do justice to the living and the dead on the day you shall appoint.”

Later, his prayer asks that “before the eyes of all men we may live your gospel and be the sacrament of Christ's presence, that we may support one another in love, that our hearts may be open to the poor, the sick, the unwanted, to all who are in need. We pray that thus we may truly be the Church of Jesus Christ, serving one another out of love for you.”

It is a simple, unadorned prayer, lacking the baroque prose and Cranmer-influenced phrasing of what was to come in the 1969 Latin Missal. But it is also one reflective of an intense engagement with the joys and struggles of the world. A poet’s prayer, from the heart.

1
Exclusive: Pope Francis discusses Ukraine, U.S. bishops and more
The Editors
2
What I learned about the priesthood of all believers as a priest lay dying in a hospital room
Michael Strande
3
Why indifference is so important to Jesuit spirituality
J.D. Long-García
4
Ita, Maura, Dorothy, Jean: The legacy of 4 missionaries murdered in El Salvador 40 years ago
Margaret Swedish
5
A brief history of ‘O Holy Night,’ the rousing Christmas hymn that garnered mixed reviews
Benjamin Ivry