Should a priest serve in Congress? Jesuit Robert Drinan did — until Pope John Paul II asked him not to. 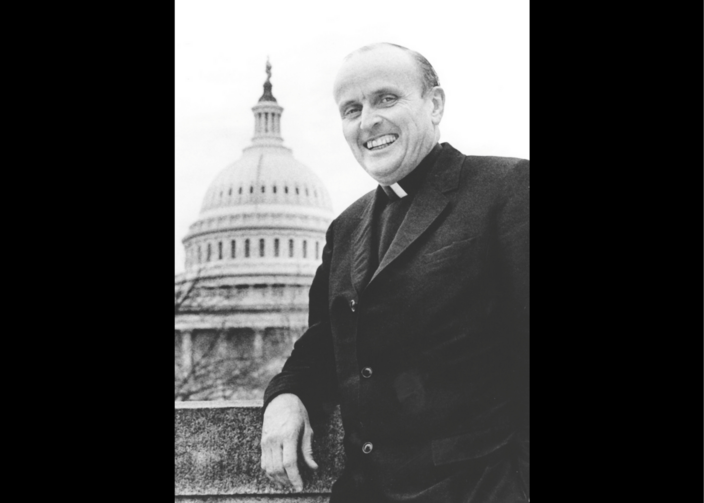 Robert F. Drinan, S.J., a longtime Georgetown University law professor who served in the House 1971-81 as a Massachusetts representative, is pictured in front of the U.S. Capitol in this undated file photo. (CNS file photo)

It has suddenly been 15 years since the death of Robert F. Drinan, S.J., the Jesuit law professor who was also for 10 years a member of Congress. He was a lightning rod for criticism and praise alike during his time as an elected representative; his tenure not only brought up the question of whether a priest should serve as an elected official, but also embroiled him in endless controversies, including those around legal abortion, privacy laws, the separation of church and state and Watergate. Yes, it’s true: Robert Drinan, S.J., who served as a member of the House Judiciary Committee that voted to impeach the president in 1974, made Richard Nixon’s famous “enemies list.”

Drinan’s funeral on Feb. 1, 2007 in Washington, D.C., drew its fair share of political heavyweights, including Speaker of the House Nancy Pelosi, Senator Ted Kennedy and Massachusetts House members Barney Frank, Edward J. Markey, James P. McGovern and Stephen F. Lynch. But the most memorable moments came during the homily, preached by John Langan, S.J., and reprinted here in America. “Through his eighty-six years he learned much and gave much to his students, his colleagues, his country, and to his community of vocation and choice, the Society of Jesus,” Langan said. “As a result, so many of us mourn him and look to him as an iconic and exemplary figure, a man in whom the religious and political issues of our age came together fruitfully, if not always happily. We salute a life well lived for the good of others.”

In the spring of 1980, as Drinan was preparing his reelection campaign, Pope John Paul II ordered the Jesuits to tell Drinan to withdraw his candidacy for a sixth term. Drinan obeyed.

Langan did not steer away from the central controversy of Drinan’s time in Congress. Three years after his election, Roe v. Wade made legal abortion a political as well as legal issue like never before, and Drinan largely sided with his pro-choice Democratic colleagues. “For the most part, his advocacy of human rights harmonized with the social and moral teaching of the Catholic church,” Langan said. “But it must be acknowledged that on the immensely painful subject of abortion there was sharp conflict, a conflict which I wish neither to minimize nor to revisit but only to put into a larger context of common concern for the well-being of women and children in a society wracked by moral disagreement.”

Many Catholics at the time were outraged at Drinan’s support for legal abortion, seeing him less as a legal scholar trying to parse the issue with care than as a quisling straying from the church’s strict anti-abortion line. It unfortunately overshadowed his many other accomplishments in Congress. During a time when the Society of Jesus faced suspicion from Rome (in the early days of the pontificate of John Paul II) for its perceived lack of orthodoxy and involvement in political movements, Drinan’s political career drew increasing scrutiny. (A chronicle of this time by Drinan’s biographer, former America editor Raymond Schroth, S.J., can be found here.) In the spring of 1980, as Drinan was preparing his reelection campaign, Pope John Paul II ordered the Jesuits to tell Drinan to withdraw his candidacy for a sixth term. Drinan obeyed.

“When he was confronted with a very stark and public choice, he made it clear what his own priorities were,” Langan said at Drinan’s funeral. “This may have puzzled and pained many of his friends and colleagues, but it made it clear that his commitment to the work of justice in the law and in politics was truly an expression of his response to the love of God, a response which affirmed that love and justice are indeed bound together, but that neither requires a particular office or role, that at the center of his being he would be God’s faithful servant first, last, and always and that this meant he would continue to be a very American, very pragmatic idealist, an advocate of the society of right in which the work of justice still needed the dedication and guidance of one who would remain priest and prophet.”

Drinan, noting that mention of religion was more or less circumscribed in the civic life of the nation, stressed the need to “restore the royal Redeemer to social and economic life.”

Drinan, who had been dean of Boston College Law School for 14 years before his time in Congress, returned to teaching and served as a professor at Georgetown University Law Center until his death in 2007. He was a frequent contributor to America in those years on jurisprudence and human rights, and a number of his articles from that time can be read here.

But none of them was Drinan’s first appearance in the pages of America: That happened on Oct. 27, 1945, when a 24-year-old Drinan penned an article on the importance of the Feast of Christ the King. It was one of dozens of articles on diverse subjects he would contribute throughout the course of his Jesuit formation, and yet his pious reflection just weeks after the end of the Second World War suggested something of what was to come for the young Jesuit scholastic. Drinan, noting that mention of religion was more or less circumscribed in the civic life of the nation, stressed the need to “restore the royal Redeemer to social and economic life” and (quoting Pope Pius XI) “to lead Him from the silence and hiddenness of the temple into the streets of the cities.”

“But no matter what success or failure comes, the magnificent words of Pius XI cannot fail to be a guide and inspiration,” he wrote, “in trying to bring Christ the King into the councils and assemblies now planning the reconstruction of the world.”