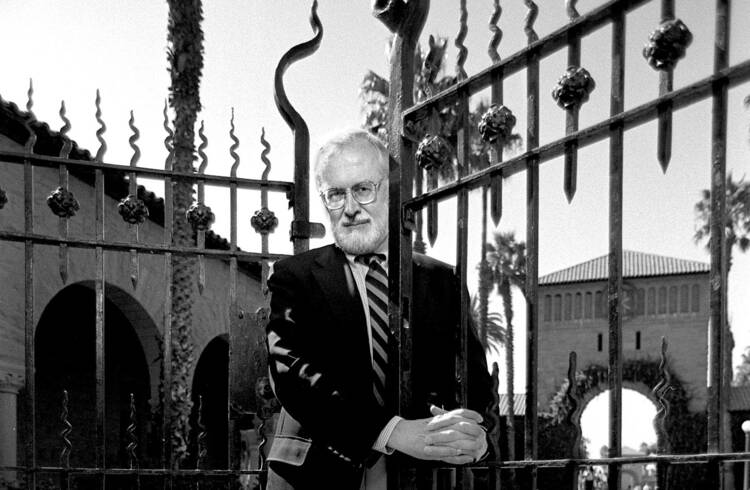 John L’Heureux, a prolific novelist, short story writer and poet, died on April 22 in Palo Alto, Calif., at the age of 84. A graduate of the College of the Holy Cross and a former Jesuit, he was a professor of English at Stanford University for 36 years. The following reflection by the prominent writer Tobias Wolff is adapted by the author from his introduction to Conversations with John L’Heureux, by Dikran Karagueuzian (Center for the Study of Language and Information, 2010).

In the summer of 1974, my brother, knowing my interest in short stories, gave me a collection he had recently read and thought I’d like—Family Affairs, by John L’Heureux. I loved it. What kind of man could write a sentence like this, describing a nun’s self-destruction by car and bovine: “Mother Humiliata took the cow at sixty...”? My kind of man.

In one of my greatest strokes of fortune, I received a Wallace Stegner Fellowship a year later to study at Stanford University with John L’Heureux. I also had the benefit of workshops with other distinguished writers and teachers, but it was John who affected me most profoundly: the rigor of his reading, the invention and boldness of his editing, and the humanity and wit of his personal presence. It was a truculent workshop in many ways, skirmishes flaring constantly along the borders of gender, politics, sexual identity and failed romances, but John could make us laugh pretty much at will, and did. Nor did he bestow this gift on us alone: I once happened to meet a man who’d been a student of his years earlier at a Jesuit high school back East. He told me that another priest had been needling John with snide messages left on the blackboard in his classroom. When one of the students suggested that John engage this fellow in “a battle of wits,” John declined on the grounds that he “would never fight an unarmed man.”

To the stories and novels we submitted for his admiration, most of them transitional to say the least, John L'Heureux paid what Jane Austen calls “the compliment of rational opposition.”

To the stories and novels we submitted for his admiration, most of them transitional to say the least, John paid what Jane Austen calls “the compliment of rational opposition.” He was dead serious in his reading of our work, and absolutely honest in his response; after which, for those with ears to hear, he generously helped us imagine the possibilities for successful revision. He was such a good reader that for some time after I left the program I continued sending John my stories, as if he had nothing else to read.

This gift for severe and imaginative editing, for demanding that every sentence, every scene prove its worth, was not the result of training in academic analysis, though John had plenty of that, but from the experience of his own practice as a poet, novelist and writer of short stories. In reading his work, one can see, feel, the demands he makes on himself for exactitude, essence, emotional honesty, aesthetic freshness, digging deep for the truths of our thoughts and desires and presenting his findings without flinching, even—no, especially—when they challenge our self-conceptions and certainties, and trouble the heart.

Read The Shrine at Altamira. You may think that the father in that novel is a monster, and what he does is truly monstrous, yet still he is human, and the pain and confusion and jealousy and blind fury that lead to his act are recognizable, and have their echoes in what we know of ourselves. John’s work is sometimes dire in its portraiture but never contemptuous; witty as Donne is witty, that is, seriously witty; adventurous in language and form without ever being cute. He is a beautiful writer.

When you read a novel like An Honorable Profession or The Shrine at Altamira, a short story like “The Anatomy of Bliss” or “Roman Ordinary,” you can’t help wishing you could sit down with the writer, ask him how he came to write such a work, how he came to write at all—what were the paths that led him to this life, what surprises did he encounter along the way, what encouragements, what impediments and distractions, disappointments and joys? What has he learned about the art he has practiced so well and for so long, and what has he learned from it? Who does he read with profit? Who does he read once and not read again? Why? What were his hopes as a young man? What were his parents like, what did they do?

Of course you can’t ask those questions if you don’t know the writer. Even as a friend, one feels hesitant to intrude. The moment is never right; you’re with other friends, the wine is flowing, the talk leads elsewhere. But John did in fact answer many of those questions, in a series of probing, far-ranging interviews with his friend Dikran Karagueuzian, later collected and published as Conversations with John L’Heureux by CSLI Publications.

When you read a novel like An Honorable Profession or The Shrine at Altamira, you can’t help wishing you could sit down with the writer.

I learned from these interviews some things interesting though perhaps not surprising, such as John’s sense of mission as an artist—“to make a new thing, a good thing.” But I encountered real surprises as well. Just one example of many: Those who were acquainted with him all know, and those who have read his work might easily guess, that John was once a Roman Catholic priest. I never asked him directly about that passage of his life—again, my curiosity was no license for infringing on his privacy—and he didn’t volunteer an account, and why should he? But I assumed that his sense of religious vocation must have been the result of years of contemplation, prayer and encouragement, perhaps even pressure from the church itself; and that his leaving the priesthood years later must have been a dramatic and perhaps bitter estrangement over some issue of doctrine—or perhaps resistance to, even censure of, his creative work.

The truth is a better story. It seems John made his way through school to Holy Cross with no particular vocation, though he liked to act and had some ambition of becoming an actor, even to the point of paying $40 for headshots for his portfolio, but as he told it: “I spent most of my time goofing off. Then in my second year I got derailed by Jesus. Who knows how or why?... I remember talking with one of my roommates about being an actor, and out of nowhere he said, ‘Why don’t you become a priest. You’re smart enough. You have no moral impediments (he talked like that) and it’s something positive and useful you could do with your life instead of wasting it as an actor.’ I dismissed what he said as ridiculous, but at the moment he said it, I knew it was going to change my life.”

From such moments, apparently ordinary, even banal, do the paths of our lives proceed. Here, as in his fiction, we see John’s honesty—it is hardly an agonizing, heroic struggle that leads him to this decision, more like the modest mustard seed of the parable—and also his respect for the essential mystery that underlies our thoughts and actions. He does not here or elsewhere attempt to explain that mystery away.

John L'Heureux taught and was patron to four decades’ worth of young writers who, taken together in their maturity, would constitute a worthy national literature.

And his leaving? Again, the truth is more interesting, and moving, than any spiritual melodrama we might imagine: “Being a priest was too hard for me. I didn’t leave because I was disappointed in the Jesuits or in the Church or because I had doctrinal issues. I left because it was too hard to be the kind of priest I wanted to be and it was too important to do any other way.” There you have it; no grand gestures, no fist shaken in the face of the heavens. The human truth, simply expressed, but in fact anything but simple or inconsequential. One can only imagine what this self-knowledge cost, after so many years, and what it cost to act on it.

I’m glad he did. Otherwise I would never have come to know him, to be taught by him, to enjoy his and [his wife] Joan’s friendship these many years. Nor would he have taught and been patron to four decades’ worth of young writers who, taken together in their maturity, would constitute a worthy national literature. I can’t name any without naming them all, and to do so would be tedious for the reader, and a perilous exercise for me—if I forgot someone, as I surely would, I’d have an enemy for life, or at least for a few days. No, for life.

Through all these years, apprentices like me were privileged to gather at a table with John—a round table, no less—and read each other’s work, and to leave not with a blueprint or manual or set of rules, but with an enhanced capacity for reimagining our stories. I was lucky to be there, to share in John’s gifts of insight and experience, and I knew it then. Those inclined to take their place at his table can still do so, by reading his extraordinary novels and stories. If my experience holds true, they will go away full, and be restless to return. 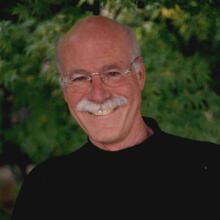 Tobias Wolff is the author of the novels The Barracks Thief and Old School, the memoirs This Boy’s Life and In Pharaoh’s Army and the short story collections In the Garden of the North American Martyrs, Back in the World, The Night in Question and Our Story Begins. His work appears regularly in The New Yorker, The Atlantic, Harper's and other magazines and literary journals.