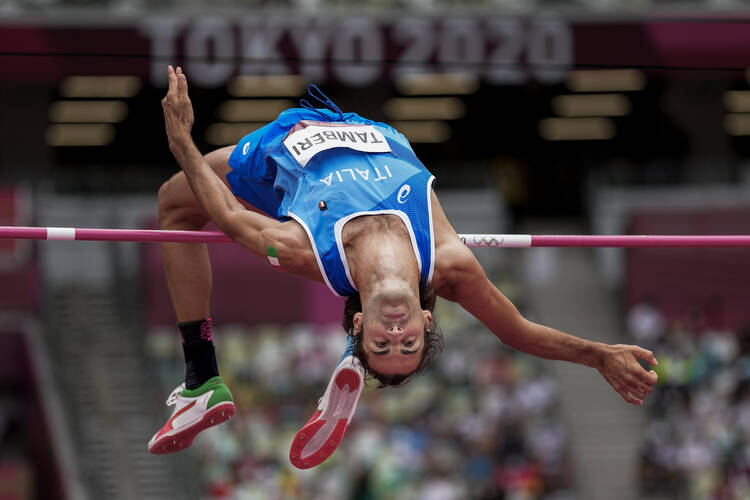 Gianmarco Tamberi, of Italy, competes in the preliminary round of the men's high jump at the 2020 Summer Olympics, Friday, July 30, 2021, in Tokyo. (AP Photo/David J. Phillip)

VATICAN CITY (RNS) — Vatican athletes might never compete in the Olympic Games, but the small Catholic state still hopes to have an influence on the global sporting event through the promotion of human fraternity and lasting friendships.

“As Pope Francis says, sport is a place of encounter and formation, but also evangelism and sharing of the Christian message,” said Santiago Perez de Camino, who heads the “Church and Sport” section of the Pontifical Council for Laity, Family and Life, in an interview Wednesday (Aug. 4) with Religion News Service.

Perez said the Olympic Games, taking place now in Tokyo, are followed by people everywhere — including at the Vatican. Pharmacists, journalists and Swiss Guards in the small city state, who joined together in 2019 to create the institution’s first official sporting association, Athletica Vaticana, have followed the Games with enthusiasm.

“As Pope Francis says, sport is a place of encounter and formation, but also evangelism and sharing of the Christian message.”

Benedetta Mattei, a 17-year-old girl with Down syndrome, who attends the events and fundraisers of Athletica Vaticana, watched with awe as her idol and friend Gianmarco Tamberi won the gold medal in the men’s high-jump competition in Tokyo on Sunday.

Mattei and Tamberi “are very close,” said her father, Giampaolo Mattei, the vice president of Athletica Vaticana. The two became friends in 2017 after an event in Rome organized by the Vatican sports team. When the Olympian learned about the health struggles she went through, he could relate, having suffered a potential career-ending injury right before the Olympic Games in Rio de Janeiro in 2016.

Despite the injury, Tamberi went on to win the gold medal in Tokyo, which he shared in a tie with his longtime friend Mutaz Barshim of Qatar. The victory, for Mattei watching at home, was a symbol that despite the hardships and opposition, you can still compete and win, her father said.

The connection between the two was acknowledged publicly by Tamberi on his Instagram page, where he shared a picture of himself and Mattei hugging and wrote in the caption: “I have made many mistakes in my life, but perhaps the most important things I did right… thank you Benedetta for filling me with such emotion.”

“I believe that Tamberi found, even in people who are most fragile like Benedetta, that push” which eventually led him to victory, Giampaolo Mattei said. “He didn’t just win the gold medal at the Olympic Games — which would already be enough — but so much more.”

Tamberi, like the other Italian gold medalist on Sunday, Lamont Marcell Jacobs (in the 100m race), trains shoulder to shoulder with amateur athletes, including members of Athletica Vaticana, at Rome’s Olympic stadium. There he would often meet with Mattei, rushing away from interviews to give her a bear hug or jumping over barriers to bring her a bottle of water.

Tamberi’s nickname is “halfshave,” for his quirk of only shaving half his face before a competition. Just before his dizzying leaps, he would put his hand over his face to highlight the difference between the two sides. Mattei, watching from the sidelines, would imitate the athlete.

When Mattei met with Pope Francis, her father said, she replicated the move to give herself courage. Before leaving to compete in Tokyo, Tamberi asked her father for a photo of Mattei with the pope and right before making the leap that would win him the gold medal, the Olympian knelt and made the sign of the cross.

In an open letter to Olympian athletes, published Jan. 2, Pope Francis alluded to the power sports have in inspiring others to excel and never give in — all the while not forgetting the important things in life.

“Play for the opportunity, give it your all, hold on to your passion. And when someone tells you 'Enough, give up!,' try it one more time: Hold on a moment longer. It could be the decisive one: There are moments that, alone, are worth all the gold in the world,” the pope wrote.

“Life is the greatest of these moments,” he added.

The Vatican’s influence in the Olympic Games, beyond personal friendships, is also about promoting Christian values of fraternity and solidarity — including in its motto.

The Olympic motto, “citius, altius, fortius,” meaning “Faster, higher, stronger,” was chosen by the “father of the modern Olympic Games,” Baron Pierre de Coubertin, who borrowed it from the Dominican priest Henri Martin Dideon. The International Olympic Committee chose to add the English word “together,” in light of the current pandemic and environmental challenges, but ran into a bit of a hurdle when it came to its Latin translation.

According to Perez it was the Pontifical Council for Culture, led by Cardinal Gianfranco Ravasi, that helped coin the correct Latin translation “communiter.”

With the addition of the word, “the Tokyo Olympics opened under the sign of solidarity suggested in Pope Francis’ Encyclical Fratelli Tutti,” wrote Monsignor Melchor Sánchez de Toca, the undersecretary of the Pontifical Council for Culture, in an article detailing the Vatican’s intercession in the creation of the new Olympic motto.

The new motto also finds a connection to Athletica Vaticana, which competes under the slogan “running together.”

“The Holy See is taken very seriously even in a sporting context,” Perez said, adding this is due in part because the Vatican does not have its own team to root for, but also because it upholds Olympic and Christian values.

The Vatican is also concerned with the “mental health of athletes, as was the case with Simone Biles,” Perez said, referring to the athlete of the U.S. gymnastics team who made headlines when she decided to step down from the competition in order to protect her mental and physical well-being, after experiencing the "twisties," or a loss of spatial awareness while in the air.

“This makes us think about the challenges we are facing and about what we at the Holy See are trying to impress everywhere, which is that sports cannot lose its playful spirit,” Perez said.

The Vatican has also been committed, with the help of local dioceses, to ensuring Olympic athletes be accompanied by chaplains and have a place of prayer and meditation available to them. “In these moments of great pressure that athletes go through before and after a competition, chaplains don’t just offer spiritual assistance, but also a friend, someone they know has nothing to win or earn — as might be the case for a trainer or a member of the Olympic team — but he is there just to help and comfort them,” Perez said.

The Catholic Church has attempted to push for the presence of chaplains at these Olympic Games, where “because of the pandemic, spiritual assistance has been reduced at a minimum, if not eliminated,” Perez said. In collaboration with other faith representatives, the Vatican has worked for the creation of an online platform that athletes can use to find reflections, advice and spiritual guidance.

In 2018, the “Church and Sport” section at the Vatican published a document signed and prefaced by Pope Francis called “Giving the Best of Yourself,” which offered guidelines for people of all faiths when it comes to sports and competition. “We are not promoting Christian sports,” he explained, “but a Christian vision of sports.”

Many popes and Catholic thinkers have written and spoken about sports, but Athletica Vaticana hopes to give these pronouncements a human face, with athletes flaunting the white and yellow papal colors at charities and public events.

“Athletica Vatican wishes to be a bridge between these athletes and difficult realities in the context of solidarity to send a message that is important for sport, but also for life,” Giampaolo Mattei said. “This we must do without being closed, but going outside to the streets, the track, with Tamberi, with the Olympic committee, with everyone to bring forward our objectives.”