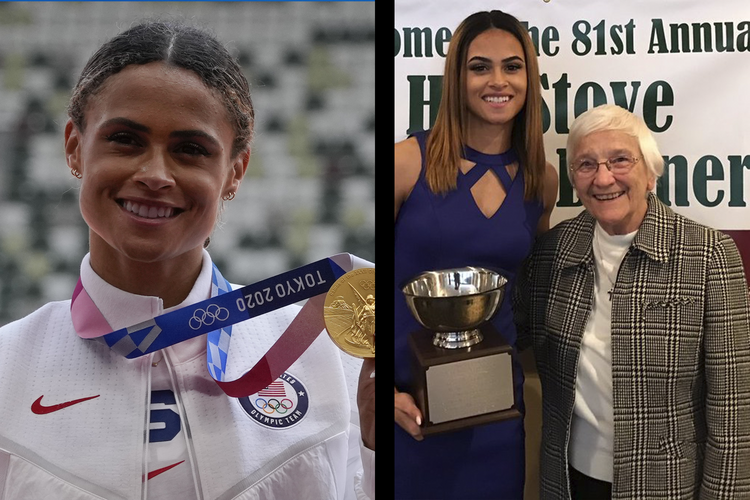 Late Tuesday night, Percylee Hart, R.S.M., stood in the Stage House Tavern in Mountainside, N.J., screaming. Wearing a royal blue jacket emblazoned with her school’s logo, the principal of Union Catholic Regional High School raised her fists—one clutching a small American flag—threw back her head and cheered as she watched the Olympian Sydney McLaughlin win a gold medal in the 400 meter hurdles at the Tokyo Olympics. Behind her, a crowd of about 500 students and supporters erupted in cheers as they watched McLaughlin, a 2017 alumni of the Scotch Plains high school, cross the finish line. McLaughlin finished the race in a blistering 51.46 seconds, breaking her own world record in the process.

Sister Percylee said it was “extremely rewarding that [McLaughlin] had stretched her limits” to achieve gold, but was as quick to commend McLaughlin for her character and faith as for her athletic accomplishments. Sister Percylee said McLaughlin’s family formed the Olympian in the Christian faith and then chose to send her to Union Catholic because the family’s core values were the same as the school’s: compassion, community, honesty, respect and responsibility.

McLaughlin thrived at the school: “She showed up. She did her work. She produced. She was always conscientious in her activities. She was involved,” said Sister Percylee, adding that McLaughlin also was attracted to helping others and volunteered for charity drives and soup kitchens. “She was manifesting who she was becoming as a person within the context of her faith,” said Sister Percylee. “Through it all, the thing that stands out the most for me is her humility,” she said, adding that McLaughlin remained down to earth even after making her Olympic debut at the 2016 Rio Olympics between her junior and senior year.

Sister Percylee has had her own share of accomplishments in her 41 years as principal of the high school, which has 680 students. She has been instrumental in shaping the school’s mission, and in March of this year she was one of three Catholic school principals honored with the National Catholic Educational Association Lead, Learn and Proclaim Award. In June she received the Lifetime Achievement Award from the Union County Commission on the Status of Women.

The thing that stands out the most for me is her humility.

Sister Percylee said that she is “loving every minute” of her ministry at Union Catholic, and that the success of the school can be attributed to the way teachers and staff have stepped up to her call to “permeate their teaching...with the good news of salvation,” and to “make it commonplace” in all their interactions—and she has called on the students to do the same. Their efforts have resulted in the sort of atmosphere that builds the ties that motivate hundreds of people to gather in a pub on a Tuesday night to cheer on one Union Catholic alumna.

Sister Percylee emphasizes that the connections formed at Union Catholic often extend beyond the students’ four years at the school. “I go back to Jesus’ message: ‘Love one another as I have loved you.’” she said. “And I think that bond of love truly is operative—and it is not broken when our students graduate, because they feel that connectedness.”

Sister Percylee said that she is proud of McLaughlin not just for what a gold medal represents in terms of physical achievement, but because it embodies the message that she tries to instill in all students at Union Catholic. “Each one is special, God's creation,” said Sister Percylee of her students. “They have special gifts and talents, and the call is to become all God calls you to be. And here [at Union Catholic,] we’re going to help you do that.”