Review: Never forget the suffering and injustice of the gulag 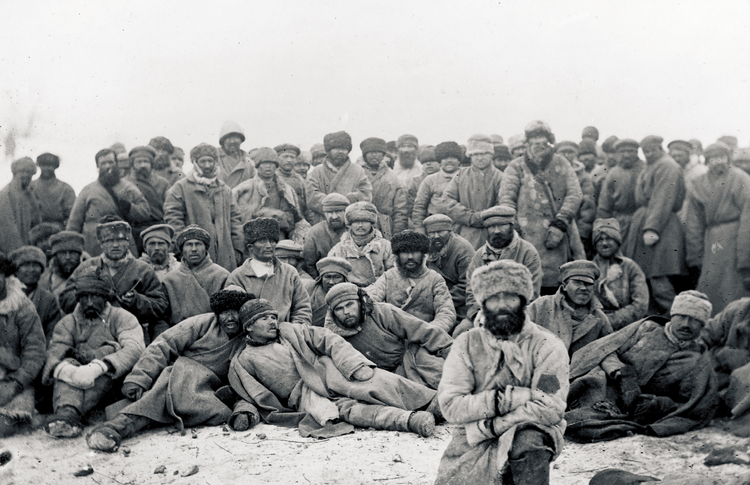 In 1939, Julius Margolin was rounded up with thousands of other Poles, crammed into boxcars and sent to the Soviet gulag. (Hard-labor convicts in Siberia, Russia / GL Archive /Alamy)

Julius Margolin (1900-71), a philosopher-writer, after having barely survived five years in the Soviet gulag with other zeks (a Russian slang term from the abbreviation of the word zakliuchennyi, meaning “convict, a prison or forced labor camp inmate”), found himself stuck in Marseilles for three weeks in 1945, waiting for a ship to Palestine. He had two books by Jean-Paul Sartre with him, Nausea and Being and Nothingness.

Journey Into the Land of the Zeks and Backby Julius Margolin (trans. by Stefani Hoffman)

Margolin’s time in the gulag profoundly influenced his experience of reading these two books. He remembers in Journey Into the Land of the Zeks and Back that Sartre’s “world was quite simply not the one in which I lived, and I resolutely refused to submit to Sartre’s ‘nonbeing.’” Later he asks, “How could [Sartre’s philosophy] help my friends whom I had left in Russia in the camp hell, and whom it would have been so easy for me to néantiser [turn into nothingness] according to Sartre’s prescription?”

In other words, Sartre had written of life in the West as an existential hell, but Margolin had lived in an actual hell, that of the Bolshevik concentration camp. He had left a wife and child behind in Palestine to seek work in his native Poland; unfortunately, he did so in September of 1939 and was swept up in the German invasion from the west and the subsequent Soviet invasion from the east. After attempts to get home ended in vain, he found himself on the Soviet side of Poland. Because he didn’t have a Soviet passport and the Soviets didn’t recognize his Polish one (because Poland no longer existed), he was rounded up with thousands of other Poles, a mix of Gentiles and Jews, and crammed into boxcars sent to the gulag in northwest Russia.

Sartre had written of life in the West as an existential hell, but Margolin had lived in an actual hell, that of the Bolshevik concentration camp.

Margolin’s memoir of his five years there reminded me of Varlam Shalamov’s two books Kolyma Stories and Sketches of the Criminal World: Further Kolyma Stories, and of Solzhenitsyn’s three-volume work, The Gulag Archipelago. Margolin’s work is not as well-written as theirs: Shalamov was the equal of Hemingway, and Solzhenitsyn brings Tolstoy to mind. Yet Margolin’s lesser talent as a writer (though he is no less passionate) makes Margolin’s book more affecting, at times, as a record of the hell of the gulag.

But he wrote for a world that did not want to hear him. The West had been allied with the Soviet Union in the war, and many Jews in Palestine and elsewhere were still hopeful about the Soviet Union. Further, the world did not want to read more bad news. After the Allies had ripped out what Margolin calls the “thorn” in the body politic of Hitler’s concentration and extermination camps, few wanted to read of camps that were worse, in terms of population and duration, even if not dedicated to genocide.

But now we have the first English translation of the book, and in our current political climate it behooves people on both sides of the political aisle to read it. It reiterates what Shalamov and Solzhenitsyn describe: the severe malnutrition combined with absurd work quotas; the ravages of the urki, or criminals whom the camp commanders often allowed to run the camp interiors; the arbitrariness of the sentences prisoners received.

Almost all of them (except the urki) were innocent of any offense; the Party had set quotas for how many people from each district should go to the gulag, and Russian prisoners of war were always given 10 years on principle. Margolin mentions a middle-aged man sent to the camps for three years because he had murdered his wife, and a younger man who, for sweeping a floor for German occupiers, was given 20 years.

In our current political climate it behooves people on both sides of the political aisle to read Julius Margolin's Journey Into the Land of the Zeks and Back.

Where Margolin’s book differentiates itself from Shalamov and Solzhenitsyn is in the depths of one man’s experience. Shalamov shares his experience in a shattering series of stories, but one comes away with a kaleidoscopic view of the Far East gulag. Solzhenitsyn tells the epic story of the gulag as a whole: his personal story, but also the historical and political development of what he calls “our sewage disposal system.” Shalamov spent 17 years in the gulag, Solzhenitsyn 10; Margolin, there for five years, wrote a more concentrated and distilled work.

Trained as a philosopher, he also makes occasional philosophical and psychological asides. In fact, he wrote several philosophical works in the camps, but they were destroyed by guards. In Chapter 32, “The Doctrine of Hate,” Margolin tells of how he wrote it and gives a précis of what he wrote. “That man,” Margolin writes, meaning Stalin, “hates, which means that some kind of inner weakness develops into hate, the result of some organic problem. Some kind of lack, defect, or unhappiness may remain within the bounds of his sense of self, but it may also spread to his social milieu and be transmitted to other people.”

Hitler, Margolin says, must have felt himself to be “deeply hurt.” “Had he wanted the truth, he would have found a real cause, but the truth was too much for him to bear. He therefore began to search for external guilty parties.” He goes on to explain:

All haters are great unmaskers. Instead of a mask, however, they tear off live skin, the true nature, and they replace reality with a creation of their inflamed fantasy. Hatred starts with an imaginary unmasking and ends with real flaying, not in theory but in practice…. It is sufficient to compare the tirades of Mein Kampf with Lenin’s passionate polemics and his thunderous charges against capitalism to sense their psychological affinity. It is the language of hate, not of objective research.

We hope, Margolin concludes, to assuage our own suffering with our hate, and restore “mental equilibrium.” But this possibility is imaginary, and the result is “eternal mental anguish.”

Hannah Arendt wrote in The Origins of Totalitarianism that “dwelling on the horrors” of the concentration camps, although not helpful in forming political programs, can help us determine if a political movement is prone to totalitarianism. Concentration camps sprang up as soon as both Lenin and Hitler came to power. Their present-day prototypes in the West are warnings.

The left, when it strives for utopia, comes up with communism; the right with fascism. Both ultimately produce concentration camps where, as Arendt said, people are “superfluous.” Hell can be other people, as Sartre said, but as Margolin describes in his latter chapters, lovers know their temporary heaven. It is the ultimate irony that the two movements of the 20th century that tried to create heaven on earth—one of a future workers’ paradise, the other of a nostalgic hearkening back to a glorious nationalist past—ended up creating instead the hells of the concentration camps.

This article also appeared in print, under the headline “In Hell with Bolsheviks,” in the May 2021, issue.