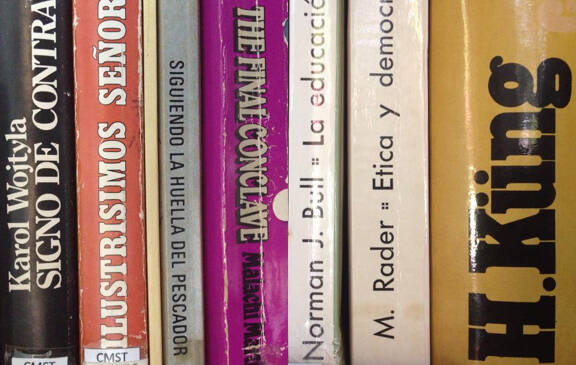 What’s on your bookshelf? Welcome to Spring Books 2021!

In the spring of 2015, I was blessed with the opportunity to travel to El Salvador for the beatification ceremony of St. Óscar Romero (he was canonized in 2018). The Mass was an intense and electric ceremony on its own—hundreds of thousands packed the capital city’s Plaza Salvador del Mundo—but equally powerful were the days before and after. Did you know that one can visit the saint’s apartment? Right across the street from where he was martyred by Salvadoran paramilitaries while saying Mass, it has been preserved as it was the day he was killed, including his bookshelves.

If almost all one’s intellectual interests meet in the town of Nerd at the intersection of Books and Church, the chance to browse the library of a saint is an opportunity not to be missed. I crouched down on the floor, my nose an inch from the glass of the bookcase, and perused the titles one by one.

What will each of our bookshelves look like if we meet an untimely end?

He was learned: academic texts in Spanish, English and French. He was practical: an owner’s manual for a Toyota Corona and a book on aerobics. He was pious: numerous short hagiographies. He held different theologies in tension: Karol Wojtyla’s A Sign of Contradiction near a book by Hans Küng. And he enjoyed a bit of lowbrow material: an English-language paperback of Malachi Martin’s 1978 novel The Final Conclave. It all seemed to fit.

What will each of our bookshelves look like if we meet an untimely end? I take comfort in the fact that no looky-loos will have much interest in mine, because they are far less edifying than the above. Mobster biographies; censured theologians; science fiction; John Irving and Joseph Heller and Donna Tartt novels galore; a Chinese-language original of Mao’s Little Red Book, of which I can’t read a word; ten million books about Bob Dylan. ¿Santo subito?

There are a few books mentioned in this special issue I want to add to that collection, however, starting with Daniel Hornsby’s Via Negativa. Jon M. Sweeney profiles both Hornsby and his debut novel in these pages and finds the story of an aging priest driving across the Midwest in his aging Toyota (not a Corona, but a Camry) to be a pilgrimage “as real as any I’ve encountered in American fiction.”

If one’s intellectual interests meet in the town of Nerd at the intersection of Books and Church, the chance to browse the library of a saint is an opportunity not to be missed.

Another fascinating book profiled here predates Hornsby’s 2020 novel by 64 years (it also predates Hornsby’s birth by half that number): Caroline Gordon’s largely unread novel The Malefactors, reviewed in this issue by Joshua Hren. A treatment of the “Lost Generation” that ends with a powerful story of conversion to Catholicism, the novel centers on a dysfunctional couple immersed in a bohemian lifestyle who eventually find God in the oddest of places. Flannery O’Connor considered The Malefactors to be “undoubtedly the most serious and successful fictional treatment of conversion by an American writer to date.” If nothing else, read it to speculate on whether the novel’s philandering husband who finds his way to God is based on Allen Tate.

Another engrossing look back is an appreciation by Joe Hoover, S.J., of Following Christ in a Consumer Society, by John Kavanaugh, S.J. Brother Hoover, America’s poetry editor and a newly published author himself, remembers an erudite scholar who took a blowtorch to our consumer culture in 1981 (and again in 2006).

There is much more in this issue: reviews of new books, visits to old favorites and forgotten treasures, poetry and more. We are also delighted to have once again one of my favorite writers, Mary Gordon, in our pages. Her “Last Word” column for this issue ruminates on her new book project: What Kind of Catholic Are You? “I am writing about living human beings, many of whom have left enormous paper trails,” she writes. “I have many more affinities with some of these people than others, just as I have more affinities with some of the fictional characters I have created than with others.” At the same time, “I believe that because the people about whom I am writing share with me a vocabulary, a set of images and shared practices (after all, when we hear the ‘Hail Mary,’ we all know the words), there are some firm grounds on which we can all stand.”

We hope you enjoy reading this issue as much as we enjoyed putting it together. America offers these special literary issues twice a year, as a chance both to introduce new authors and to peer into our bookshelves, disedifying though they may be, for a beloved classic.

Read all of our Spring Literary Review 2021 articles here.