What the Jesuit John Kavanaugh understood about our consumer society 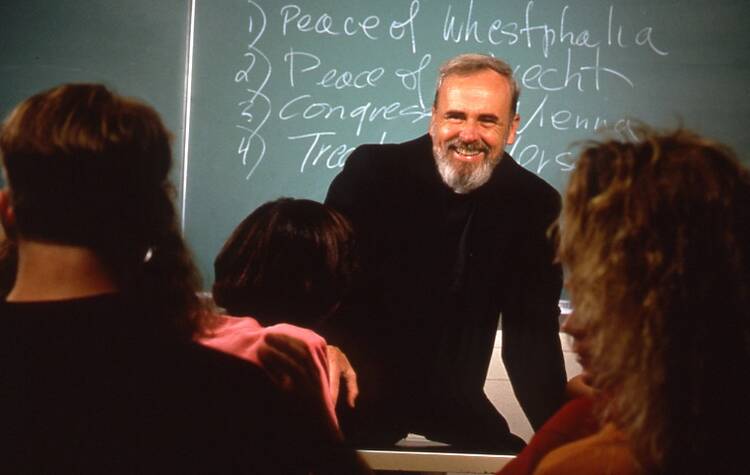 Let’s say you had never heard that there was such a thing as a Jesuit, or the Catholic faith for that matter, or philosophy, or theology, or the Man-God Jesus Christ, or moody scriptural folk music, or Madison Avenue or the very concept of the objectification of the human person via the invisible choking reeds arising from the swamplands of unbridled free-market capitalist imperialism. Let’s say you have never even heard the name Kavanaugh.

If you had never heard of any of these things, and you were in line for a Ferris wheel, and John Kavanaugh, S.J., was in the same Ferris wheel line, you would nevertheless likely be compelled to go up to this person you didn’t know at all, and say:

Hey, Father Kavanaugh, S.J., while we’re waiting for our turns on the Ferris wheel, can you give me a brief, reasonable but impassioned disquisition on how the blinding brilliance of Madison Avenue, the bloodthirst of Lockheed-Martin, the humano-cultural delusions lurking beneath Western free-choice hyperindividualism and the crushing austerity policies of the post-Reagan 40-year American economic death spiral all congealed to so twist and reconfigure American souls that it turns people into, I don’t know, things that exist merely to be bought and sold, written off as utterly disposable?

And then, Father Kavanaugh, could you add that when you really consider all sides of the matter, you have to admit, as open-minded, diversity-inclined and religiously un-bullheaded as you are, that the only truly effective countervailing force to all that clawing and scratching American capitalist toxicity is Jesus Christ, and us trying to be how he was.

And then, Father K, maybe bookend it with a few notes from a gently weeping guitar?

Kavanaugh was an esteemed scholar and beloved professor of philosophy and medical ethics at St. Louis University for 36 years.

It is likely that Kavanaugh would say, crushing a cigarette underfoot and looking at you as if you were the only person on the boardwalk that day, “absolutely,” and start reciting by memory from Following Christ in a Consumer Society.

Black turtleneck under a light gray summerweight blazer, thin black beard, dark eyes lively and kind but pitted with the capacity for blistering socio-economic outrage, leafing through Aristotle, The Wall Street Journal or The St. Louis Post-Dispatch style section to glean ammunition for his cause, John Kavanaugh looked like what you think a Jesuit would look like, even if you had no idea what a Jesuit should look like. He also wrote the book that you think a Jesuit would write, even if you had no idea that such a book ought to be written.

Kavanaugh was an esteemed scholar and beloved professor of philosophy and medical ethics at St. Louis University for 36 years (as well as a parish priest, social activist, musician and America columnist), until his death in 2012. His seminal book, Following Christ in a Consumer Society, published by Orbis Books in 1981 and later translated into several languages and revised and reissued in 1991 and 2006, has been taught in Jesuit high schools and colleges, as well as numerous other Catholic institutions across the country in the 40 years since it was released. Its influence has been immeasurable.

Kavanaugh’s thesis in Following Christ is fairly simple: We become what we do, or what is done to us.

Kavanaugh’s thesis in Following Christ is, in a way, fairly simple: We become what we do, or what is done to us. He lashed his critique of an all-encompassing American capitalist culture, where everything and everyone has a price, at two philosophical poles: the “commodity form” and the “personal form.” Humans relate to one other as mechanistic utilitarian functionaries—or as objects of love, vulnerability and grace.

The commodity form is, to his mind, all but deadly. “If you are unproductive, you are useless, worthless,” he writes. “You are unwanted, whether you be one of the economically poor, a starving Bengali, a death-row criminal, or a bothersome five-month fetus.”

One of his philosophical arguing points was Karl Marx’s description of the “fetishism of commodities.” “We relate to [things] as if they were our gods,” Kavanaugh writes, “giving us meaning, purpose, and a reason for living.” We at some point began relating to each other as if we were merely objects too.

This Marxist analysis coheres with one of Kavanaugh’s other lodestars, Pope John Paul II. In the 25th-anniversary edition of Following Christ, Kavanaugh quotes the pope’s 1990 homily to workers in Monterrey, Mexico, as a crystallization of his book’s fundamental argument. While acknowledging the benefits of free markets, the same pope who helped bring down totalitarian communism declared, “We cannot, however, be silent about the defects of an economic system which...subordinates the person to capital in a way which, without taking personal dignity into account, considers him or her to be only a gear in production’s mammoth machine.”

When surveying American culture, Kavanaugh reserves a generous portion of barely disguised disgust for the advertising industry. For him, the culture of incessant marketing—and being marketed to—chisels its participants into the commodity form with unmatched alacrity. Kavanaugh calls this industry “a nationally institutionalized deceit—a drumming up of false needs and the huckstering of false promises. ‘Datsun saves, sets you free.’ ‘Buick is something to believe in.’ ‘I’m looking for a meaningful relationship and I found it at Saks Fifth Avenue.’ ‘Coke is the Real Thing.’” (Clearly these are from the 1981 edition.) This particular American enterprise causes papier-mâché cathedrals to blossom into our souls. “While religion has become secularized,” he writes, “buying and consuming have become vehicles for experiencing the sacred. Eternity is found in Calvin Klein bottles. Infiniti in a Japanese automobile.”

Kavanaugh’s passionate criticism was also personal. “In my own discussions with parents and their children concerning the problem of family stress and fragmentation,” he writes, “I know of no other force so pervasive, so strong, and so seductive as the consumer ideology of capitalism, its fascination for endless accumulation, extended working hours, the drumming up of novel need fulfillments….”

His arguments are not without nuance. Being productive or marketable, or “consuming,” are not wrong in and of themselves.

His arguments are not without nuance. Being productive or marketable, or “consuming,” Kavanaugh writes, are not wrong in and of themselves. But things go off the rails when, as he puts it, “the relation of persons to production is reversed, when the instrumentalities become the measure of the persons.”

It is not his project, he tells us, to declare that capitalism is intrinsically anti-Christian. But, he says, if capitalism “is not subjected to standards of a value system or vision of humanity outside of its own criteria for truth value, usefulness and success, it is inherently destructive of humanity and a fortiori systematically opposed to Christianity.”

In his book, his classes, public lectures and preaching, John Kavanaugh occupied a space few other cultural critics occupied; he operated from an unyielding worldview that had the potential to basically tick off pretty much everyone. “There is a connection between ‘clean’ and precise surgical bombings and our antiseptic delivery rooms, both of which administer a so-called sanitized death,” he writes. “There is a web of meaning which attaches street violence to the degradation of women in the media and the heartless neglect of our children. There is a relationship between the attitude that millions in the Third World might be better off dead and our new technologies of euthanasia and assisted suicide for those who have ‘no meaning’ or no ‘quality’ of life.”

For Kavanaugh, the only true response to our consumer culture is the life of Christ: inviting, healing, self-sacrificing, loving.

He never subsumes all of these social ills under the banner of “life issues” as some Christans do today, turning the phrase “pro-life” into such a catch-all basin of social critique that it becomes almost politically meaningless. Kavanaugh’s analysis is both more specific and deeper.

For Kavanaugh, the only true response to our consumer culture is the life of Christ: inviting, healing, self-sacrificing, loving; the perfect embodiment of the “personal form.” Kavanaugh takes the reader through a comprehensive tour of Scripture, prayer, the sacraments and the witness of religious and lay communal life. He sketches a master narrative, practically a catechism unto itself, of how radically following Christ opposes and transforms everything that materialism and consumerism does to us.

The beating heart of Kavanaugh’s passion for Christ is his discussion of “The Final Judgment” in Mt 25:37-40. “‘When did we see you hungry and feed you Lord?’ ‘When you fed the least of these.’” Kavanaugh writes:

I've been a priest for 50 years and still struggle with the problem of evil
John J. Strynkowski

John S. Dunne: A theologian (and author) for our dark times
Jon Nilson

Marx in his wildest dreams, humanists in their most articulate flights, secularists in their most vaunted claims, cannot approach the revolutionary, the humanistic reaches of this statement. Nowhere has human dignity been more highly exalted. The least human person—the dregs, the poorest, the least attractive...is identified with Jesus himself, identified with God himself.

The precise look and feel of American-style violence, poverty and dehumanization changes year to year; the racial and economic disparities between who has lived and who has died in this pandemic are only the latest example. The location of the ad industry continues to shift and mutate too: We carry billboards in our pockets, activate marketing platforms just by walking around our cities and towns. Someone is listening for relevant consumer info through a tiny microphone while you talk to that stranger in line. Nevertheless, capitalism is still capitalism, and the witness of Christ is still the witness of Christ. This book will never go out of style.