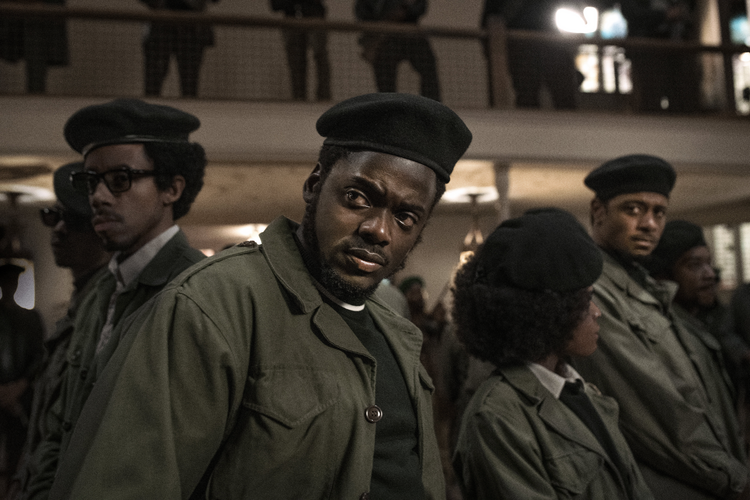 The “messiah” of writer-director Shaka King’s “Judas and the Black Messiah” is Fred Hampton, a Black Panther leader, orator, organizer and, in 1969, a 21-year-old murder victim at the hands of Chicago police. Like many men so proclaimed, he never used the term to describe himself; he knew he would be killed; he knew by whom. The messiah appellation, as has happened several times in history, was used not by the subject but by his chief antagonist, in this case J. Edgar Hoover, the Pontius Pilate/Elijah Muhammad/Mohammed bin Salman of a very powerful, very saddening movie.

And Judas? As often happens—see Iago, Grendel and the Satan of “Paradise Lost”—he is the more interesting character, precisely because of his moral ambiguity, or outright amorality.

The “messiah” of the title is Fred Hampton, a Black Panther leader, orator, organizer and, in 1969, a 21-year-old murder victim at the hands of Chicago police.

Hampton, played by Daniel Kaluuya (“Get Out” and “Black Panther”), is a fierce public speaker, a passionate advocate of black liberation, an enemy of white capitalism and a threat to the America sustained by the likes of Hoover (a briefly seen but effective Martin Sheen). But in this film, he is almost always Fred Hampton the public figure. The scenes involving his love interest, Deborah Johnson (Dominique Fishback), temper Hampton’s flame, but they also feel calculated to do exactly that.

The Judas figure is Bill O’Neal (LaKeith Stanfield), an F.B.I. informant who infiltrates not just the Chicago chapter of the Panther Party but Hampton’s immediate circle of confidantes. The introduction to O’Neal—the protagonist of the story despite Hampton’s prominence in the history of American civil rights outrages—is electric. Wearing a trench coat, trilby hat and phony F.B.I. identification, he barges into a Black bar in Chicago, frisks the patrons, takes one’s car keys—and almost gets away in his car. What his counterfeit F.B.I. badge does is bring him into the warm embrace of the feds, specifically Roy Mitchell (Jesse Plemons), who gives O’Neal a choice: Inform on the Panthers or go to federal prison for impersonating an agent.

‘Judas and the Black Messiah’ is a film of valuable insights, but negligible joy.

O’Neal doesn’t need that much convincing. He likes the cash. He likes the expense-account steaks that Mitchell treats him to during their occasional debriefings. Contrasted with the prophet-like Hampton—Kaluuya does bring a rare and ferocious degree of righteous indignation to the part—neither O’Neal nor Mitchell really has a moral center. To be sure, both recognize their complicity in evil: Mitchell by being the tool of Hoover’s racist policies, O’Neal in being Mitchell’s tool. They are compromised, respectively, by craven careerism and fear of prison. Neither, provides any reason to think they deserve absolution, since they pursue their ends despite their awareness.

Which may be why “Judas and the Black Messiah” is a less-than-satisfying movie. There is no redemption. There is certainly an implication that Hampton should be viewed as a Christ-like figure—he brought disparate groups together for a righteous cause, his sacrifice was real, and there has never been much doubt that his death was a government-sanctioned assassination. But his Panthers also committed their share of appalling violence, even if what Hoover and Mitchell maintained—that the organization was the black equivalent of the K.K.K.—is ridiculous.

As a political statement, “Judas” is powerful, a quite relevant revisiting of an American past that, as William Faulkner would have observed, isn’t even past. For that reason alone, it is a film of valuable insights, but negligible joy.