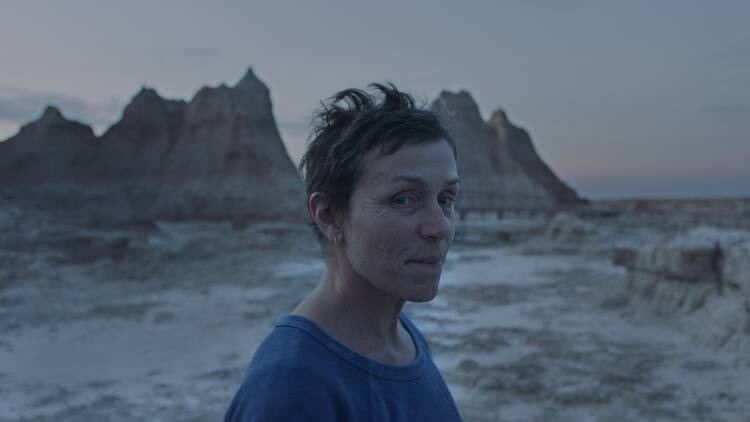 “Nomadland” is the kind of movie that wins awards and no one ever watches it again. It’s cruel but true. So is the film—which, of course, is the problem. Awards voters, even the Hollywood foreign press, which gives out the Golden Globes and named “Nomadland” their best film and Chloé Zhao their best director on Sunday night, could see that the film says too much about America to be ignored. With recognition duly paid, the impulse will be to hereafter ignore the message.

It is, admittedly, a tough watch. Largely a character study and a showcase for the actress Frances McDormand, it could not have been made anywhere but the United States. The vast expanses of the Western desert, the purple mountains’ chilly majesty, provide a stark, flat, unwelcoming setting for the story about retirees and other Americans living in their vans, migrating from seasonal jobs to swap meets, from national parks to potato harvests, orbiting the interior of their country, unhoused and inadequately supported. They might as well be on the moon for all the good America is to them.

“Nomadland” is the kind of movie that wins awards and no one ever watches it again. It’s cruel but true.

Fern, McDormand’s character, is the classic disillusioned American—a distillation, perhaps, of the Trump voter profile. And Fern’s story is based on fact: Her real-life counterpart and her husband worked for years for U.S. Gypsum in the company town of Empire, Nev.; it was shut down in 2011, and its population was evicted within a year. (The film takes place not long afterward.) Fern’s husband has died and left her little; she has lost her home and town, and so she has converted her van—named “Vanguard”—into a combination motor vehicle and efficiency apartment.

It has often been said, and been proven true, that America can be seen freshly only through foreign eyes. Much has been made of the fact that Zhao is Chinese-born; but she was educated here, lives here and her films (“The Rider,” most prominently) have been made here too. It is pure conjecture, of course, but the fact that Zhao will forever be “Chinese” in the eyes of many Americans probably contributed to the delicate way she interprets Fern’s own imposed alienation from the country she thought she lived in.

Many if not most of the cast of “Nomadland” are “real” people, actual van dwellers.

One of the criticisms of “Nomadland” has been its departures from Jessica Bruder’s 2017 book, which focused more deeply on the exploitation of such “nomads” by the companies, notably Amazon, that hire them as temps and then send them on their way. The nomads are the perfect employees, of course: They are older, uncomplicated, desperate for work and bring their own housing with them. This is important stuff, but it is hard to imagine how Zhao could have shoehorned a Marxist dialogue into a movie about a very single woman that is in many ways a tale of survival, even an adventure story.

But politics are not ignored entirely. And some critical questions are at least implied. For example, if charity is a virtue, why are we taught that the taking of charity—or even bottom-line support—is a vice? Fern cannot accept housing from the several friends who offer; she accepts cash to fix her van from her sister, but insists she will pay it back. And you know she will. What I didn’t like about “Nomadland” was its implication that what Fern has attained is freedom, when what she really has is zero options.

What I didn’t like about “Nomadland” was its implication that what Fern has attained is freedom, when what she really has is zero options.

David Strathairn, that bottomless well of nuanced portraiture, plays Dave, whom Fern keeps meeting as they make their separate ways from the Arizona desert to temp jobs at Wall Drug to points undetermined; it’s like they are circling each other at a singles bar, except the bar is the vast midsection of America.

Many if not most of the cast of “Nomadland” are “real” people, actual van dwellers, including Bob Wells, a well-known YouTuber and author who pops in a few times to deliver the critique of capitalism and, in one scene, to serve as confessor to Fern. During that moment, Bob himself confesses, in a way: He tells Fern that his dead son, “who took his own life,” would have been 33 on that very day. The choice of words is significant. So is the age, which cannot be a coincidence. Likewise, the fact that Bob looks like an Old Testament prophet and preaches to the assembled nomads. “We gladly throw the yoke of capitalism on and live with it our whole life,” he tells the multitude at one of his conclaves, called the Rubber Tramp Rendezvous. He might just as well be saying “render unto Caesar.”

Borat’s humor is funny and ethical. Not.
Jake Martin

It may have been because this review was intended for America, but on my second viewing of the film, what the van dwellers suggested to me was the apocalyptic Jewish Christians of the earliest church. They are a pioneering subculture, a gnostic bridge of transition—not from Judaism to Christianity but from capitalism to something else. They invent their own rituals. They live by barter. They comprise a Marxist collective of sorts, even if it is one that has no geographic base. Like the world of the internet, everyone lives everywhere. All the nomads need is parking space.

More on the Golden Globe Winners: