Can movies like "Get Out" scare us into being better people? 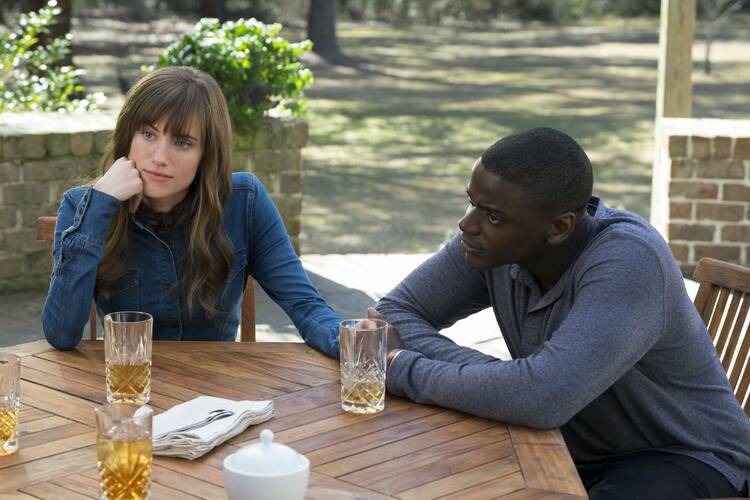 Rarely have I seen a movie audience as viscerally satisfied as the audience with whom I saw “Get Out,” the new horror-comedy written and directed by Jordan Peele of the comedy duo Key and Peele. I saw “Get Out” in a downtown D.C. theater on a Saturday night, amongst a big and mostly black crowd, drawn in by the promise of a horror movie where the villain is racism.

You could describe several previous horror films that way. Think “White Zombie” or, to a lesser extent, “Night of the Living Dead.” But “Get Out” is made from a black perspective, unlike excellent but white-POV films like “Candyman.”And where films like “Tales from the Hood” were didactic, “Get Out” is angry and baffled and terrified. Its effect on the audience was electric.

“Get Out” is angry and baffled and terrified. Its effect on the audience was electric.

The setup is simple: Chris (Daniel Kaluuya) drives way, way out into the country to meet the parents of his white girlfriend, Rose (Allison Williams). He is already a little on edge, but he’s the kind of guy who laughs it off, who accepts the absurdity of inhabiting a black perspective his girlfriend will never be able to share. They have a couple confrontations in which Rose proves to be a kind of “woke white girl on the loose,” and then they arrive...at a majestic plantation-style house staffed by black servants, ruled by a steel-tipped matriarch (Catherine Keener) and prowled by her drunken, violent son. The atmosphere is already tense—and it’s about to get much worse.

Kaluuya is terrific—his eloquent silences, his unsurprised acceptance. (“How are you so calm?” Rose asks Chris.) Chris always has a laugh to smooth things over. He’s aware but not angry, he’s always ready to reassure her that everything’s okay, and Kaluuya captures that “serenity as self-defense” aura perfectly. Lil Rel Howery as Chris’s excitable best friend, Rod, provides excellent and much-needed comic relief. The music is unusually good even for horror, a genre blessed with countless glorious doom-laden soundtracks. I could quibble—the scenes set inside Chris’s head look cheesy; the film tells us that it’s got one of the classic elements of a Moonlight, Magnolias and Madness finale, but we don’t get to see it; the final deus ex machina has fairly creepy political resonance—but almost everything about this movie is both intelligent and raw.

There are all these perfect details: Rose endears herself to us, in her first appearance, by knocking on Chris’s door with her forehead; we only see Chris meet and hug the parents from a distance, at the far end of a long shot; the matriarch abhors smoking, because upper-class people don’t smoke anymore. There are phrases you’ll never be able to hear the same way again (“hot NBA prospects”).

But under all that—under the jump scares and the improvised weapons, under the twists and reveals—“Get Out” is subtle and disturbing.

The movie turns more than one racist trope inside out: the black man who preys on white women, for example. Rose’s father has a long, awkward speech about Jesse Owens, and white folk are just constantly talking about Chris’s physical prowess and feeling his muscles; but Chris is an artist, not an athlete, and the film’s villains are not really interested in his body. They want his mind.

Above all they want to share his experiences and know his perspective from the inside. (Yes, the villains of this movie are basically the white viewers of this movie.) They want to steal—to obtain without cost or consent, not as a gift but as theirs by right—the one thing they truly cannot have: the inner experience of being black in America.

There’s a 2003 essay collection called Everything But the Burden: What White People Are Taking from Black Culture. And “Get Out” explores that white fascination with black life: You are so vibrant, so in touch with nature, so emotional, so spiritual!We want all of that—but without the part where people hang us from trees or shoot us in the streets or entomb us in prisons. “We want your vision,” the villains of this movie might say, “without suffering violence.”

In this way “Get Out” is strangely parallel to 2009’s controversial, gory “Martyrs,” a French horror film about a villainous group’s search for a vision of transcendence. Like “Martyrs,”“Get Out” is a message movie that never needs to state its true message. But where “Martyrs” championed compassion over religion, morality over sublimity, “Get Out” argues: People on the handle end of oppression know that they lack some truth known and cherished by people on the blade end. But there is no way to see the world from the blade end without facing the cutting edge.

Eve Tushnet is a contributing writer to America.