‘Minari’: A delicate look at a Korean-American family’s fierce love and complex faith 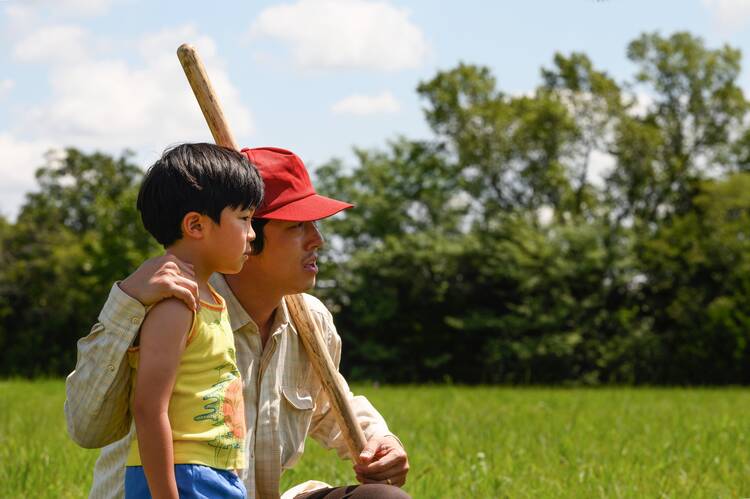 This is a scene from the movie "Minari." (CNS photo/Melissa Lukenbaugh, A24)

A boy starts to run across a field, and his parents call out to him to stop, to be careful of his weak heart. A tornado threatens the mobile home where they live, but it doesn’t reach them. The boy and his sister convince their grandmother, who speaks only Korean, that Mountain Dew is a health food. A white man carries a huge wooden cross down a country road, and when the boy’s baffled parents offer him a ride, he explains, “This is my church.”

For a long time it seems like Lee Isaac Chung’s semi-autobiographical film “Minari,” about a Korean-American family that moves to rural Arkansas so that the father can realize his dream of being a farmer, will be the kind of movie made by the slow accumulation of small, vivid scenes. Not as stylized as Terence Davies’s 1992 “The Long Day Closes,” but in the same genre—tender, patient, plotless. This is what childhood is often like, as small moments teach us something we don’t quite understand.

This is what childhood is often like, as small moments teach us something we don’t quite understand.

But by its fiery climax “Minari” reveals that it does have a plot beyond its collage structure. It’s a movie about whether the Yi family will make it—in Arkansas, but also as a unit. If the water dries up, if the crops don’t sell, will their love survive?

Jacob Yi (Steven Yeun) is a patriarch as American as Pa Ingalls. The move from California to Arkansas has placed him in the same situation as his 7-year-old son, David (Alan Kim). Both have to reckon with all that they do not understand—about the land and about their own family. Meanwhile, Anne (Noel Kate Cho) shoulders as much responsibility as she must and sneaks in as much childhood as she can. Monica (Yeri Han) tries to have faith that her husband’s choices will work out, in spite of the visible horror she feels when she sees their new home. (When they first arrive, the mobile home doesn’t even have steps up to the door, so they have to haul themselves up several feet to get inside.)

The direction isn’t showy; this is a movie carried by its story and by the stellar performances, including Yuh-jung Youn as the grandmother, Soonja. Soonja is both catalyst and antagonist. David complains that she “smells like Korea,” in one of the relatively rare moments where we see the pressures of assimilation and ethnic difference. She isn’t “a real grandmother.” She prefers watching pro wrestling to baking cookies. Her struggle to win her grandson’s love is the secondary plotline, complicated by her own rapidly deteriorating health. In the end it’s Soonja’s painful longing to be part of the family that will provoke the movie’s most terrible event—but “Minari” is about new beginnings as well as hard lessons.

The direction isn’t showy; this is a movie carried by its story and by the stellar performances.

One of the unexpected pleasures of the film is the way it embeds the Yis uneasily in a rural Southern community. There are encounters that tilt toward racism and sometimes into it, but these encounters mostly involve children. Since neither the Asian children nor the white ones really understand what they are saying, these painful moments veer in odd directions, in one case even forging friendship. Meanwhile Jacob plans to sell Korean vegetables to Korean-Americans in Texas and Oklahoma as well as Arkansas—a growing market, if only he can come up with the crops. Jacob and Monica work as chicken sexers, and Monica tries to bond with her Korean co-worker.

That scene includes one of “Minari’s” strengths: a grounded, lightly comedic portrayal of the many varieties of American Christianity, without any preachiness, neither accepting nor rejecting the forms of faith on offer.

Arkansas is a land of opportunity for the Yis, as well as the site of their suffering.

Monica brightly suggests that there are enough Koreans around to form their own church; instead of leaping at the suggestion, the co-worker says with a laugh that people like her came to Arkansas “to escape Korean church!” Monica’s intense, slightly scary faith and the grandmother’s skeptical pragmatism conflict several times, including in poignant scenes where David, who has a heart murmur, worries about whether he wants to “see heaven.”

We meet the children of the white church, caught up in boredom or entitlement. But we also meet Paul (Will Patton), a Korean War veteran who works for Jacob. Paul is a kind of Christian every American has met, but whom we rarely see on screen. Jacob immediately sees that he is not all there. He doesn’t quite speak in tongues, but he doesn’t exactly speak sensibly either. He is a freelance exorcist, and he carries that cross every single Sunday along the back roads as the white Christian kids make fun of him. He is not sinister; in fact, he shows so much insight into the Yis’ problems that it makes Jacob angry. Where Jacob tries hard to project strength, Paul is visibly broken. He offers to bless Jacob and his wife, having seen that they are struggling; Jacob replies brusquely: “No need. Come early tomorrow—lots of work to do.”

Again, none of these ways of relating to God and to life’s struggles are either endorsed or fully rejected. Instead there is a nuanced respect for everything the characters are trying to do. “Minari” depicts these characters’ failures and cruelties without making excuses. It also forgives them.

This forgiveness extends to the parents, to the grandmother, to the overlooked daughter and the son who flings hurtful words—and to Arkansas itself. Arkansas is a land of opportunity for the Yis, as well as the site of their suffering. Arkansas is a crucible of punishment and community, hope and disappointment. “Minari” slowly reveals its deep concern for the land, the specific needs of the soil and its crops. Its title is the Korean name of an herb that grows not in the orderly rows of the farm but in wild abundance along the swampy side of a creek. In hidden, neglected places, where snakes roam, something new can find a home.