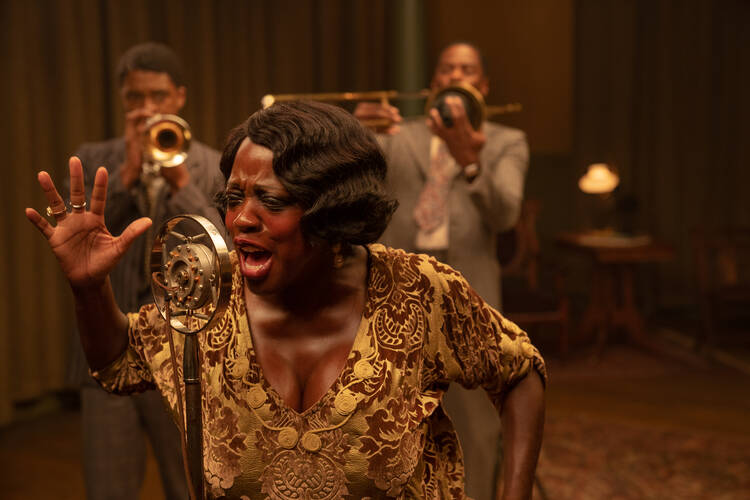 For August Wilson, the great poet-chronicler of 20th-century African-American life, music was more than a diversion or a dramatic subject—it was a central wellspring of his art. As he often recounted, it was his discovery of an old Bessie Smith record in a thrift shop that made him hear how his plays might sound. “The universe stuttered,” he later said, “and everything fell into place.”

Wilson would burst onto the theatrical scene in 1982 with a play about another real-life 1920s-era blues diva, “Ma Rainey’s Black Bottom,” before going on to write nine other plays about Black life in the last century.

Viola Davis conveys both Ma Rainey’s queenly self-possession and the overwhelming exhaustion of maintaining such a stance.

“Ma Rainey’s Black Bottom,” now a smashing new film co-produced by Denzel Washington, playing in some movie theaters and coming to Netflix on Dec. 18, is at its heart the tale of a shuddering culture clash. Ma Rainey (Viola Davis), a musical sensation in the South with a down-and-dirty voice and bawdy double-entendre lyrics, comes to a Chicago studio to record some of her hits with an all-male band and insists on doing it on her own terms, in her own good time. She succeeds, more or less; her band doesn’t fare as well.

Though these four musicians’ competitive jockeying is the central focus of Wilson’s play, the film subtly shifts the center of gravity toward the title character. This isn’t just a matter of Ruben Santiago-Hudson’s deft screenplay giving her a bit more screen time. It is also a case of a performance naturally pulling focus by embodying cinematically the themes the play has its characters talk about.

“Ma Rainey’s Black Bottom” is at its heart the tale of a shuddering culture clash.

In Davis’s towering, toothsome performance as Ma Rainey, we see both the need for Black artists to be uncompromising in the face of white exploitation and the terrible toll such defiance can take on a soul. Davis conveys both Ma Rainey’s queenly self-possession and the overwhelming exhaustion of maintaining such a stance. We can see it most clearly in the striking contrast between her hunched, downward-looking stare when she’s soliloquizing or negotiating and the unadulterated joy that pours out of her straight-backed frame when she sings.

Meanwhile the men in her band are in a drama of their own, sparked by the ambition of a cocky young trumpeter, Levee, as he chafes against the constraints of what he calls “this jug-band music” and riles up conflicts among older colleagues who are more ready to simply do as they are told and get paid. As Levee, a wiry Chadwick Boseman—in his final performance before his untimely death from cancer at age 43—gives full due to this young musician’s restlessness and vanity, as well as to the harrowing trauma that drives it.

The play and film are distinguished—you might say haunted—by two narrative monologues of anti-Black violence in the Jim Crow South.

Indeed, the play and film are distinguished—you might say haunted—by two narrative monologues of anti-Black violence in the Jim Crow South, which these characters have ostensibly left behind in the Great Migration to the North. The first is from Levee, who recounts his attempt to defend his mother from a gang of white rapists when he was only 8 years old. The other is by Cutler (Colman Domingo), the band’s even-keeled trombonist, who tells of a reverend’s humiliation in a small Southern town. The latter story, though it is not about Levee, triggers his biggest moment, a frightening altercation with his bandmates that climaxes with a tearful cri de coeur against God’s apparent indifference.

The film’s most heartbreaking stand-alone moment, though, may be in a quiet, despairing monologue by the pianist, Toledo, played with gently crusty authority by Glynn Turman, an old hand at Wilson’s work onstage. As he plays through a slow blues, he compares the African diaspora to a stew, with the trans-Atlantic slave trade and the U.S. economy it jumpstarted as a sort of feast. The unhappy conclusion: “The colored man is the leftovers. Now, what’s the colored man gonna do with himself? That’s what we waiting to find out. But first we gotta know we the leftovers.”

August Wilson will not go quietly: a review of 'Fences' and 'Jitney'
Rob Weinert-Kendt

Wilson’s great project—10 plays, each set in a different decade of the 20th century—would arguably reach greater heights in such works as the family drama “Fences,” the ensemble work “Seven Guitars,” and his masterpiece, the gritty fable “Joe Turner’s Come and Gone.” But in “Ma Rainey” he laid down the themes on which he would play such brilliant variations: the liminal status of an uprooted people in a world largely built by them, but not for them, and the attendant tragedies of this alienation—and, counterposed to that, the vibrant, irreplaceable culture they have forged in this shadow.

The blues is one such essential product; so are the plays of August Wilson. This new film of “Ma Rainey’s Black Bottom,” directed with exuberant but unsentimental precision by George C. Wolfe, offers a resounding tribute to both.

@RobKendt
Provide feedback on this article
Join the conversation: Login or create an account
Before you can comment, you need to update your profile to include your first and last name, as required in our comments policy. Then reload this page and you'll be set up for commenting. Update your profile
Show Comments ()
Login to comment.