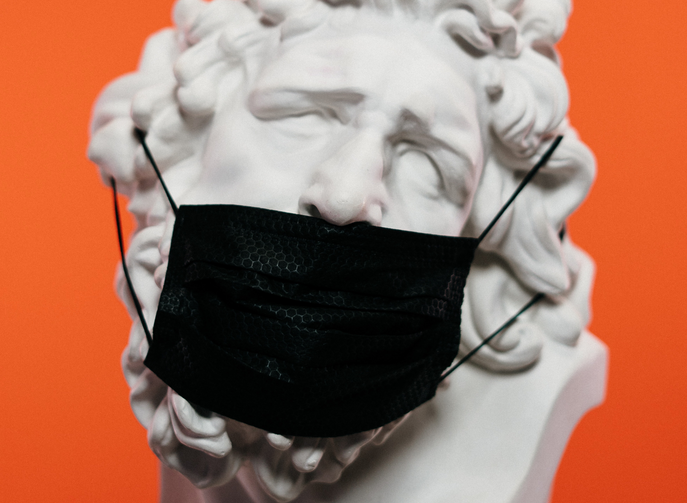 This past spring, a mask became a sign of neighborly care—the signal of a fellow citizen abiding by the social compact of concern for the common good. It also, ironically, became an artifice that allowed me to persist in a private idiosyncrasy in public. Masks, I discovered, mean no one can see you talking to yourself.

Talking to myself is a habit I unintentionally cultivated as a child, chattering out stories while tramping solo through my backyard woods. It is a quirk I have tried unsuccessfully to kick now that I live in a city where there are very few solitary woodland paths on which to wander and yammer out loud to my heart’s content. Instead of trees, I move among strangers who are—rightfully—wary of anyone marching down the sidewalk engaged in animated conversation with the air.

In a city, someone vigorously talking to him or herself is usually a sign that the person has, in some way, broken with reality. A city-dweller is quite justified to take a step away.

“Talking to yourself can be useful,” objects Zadie Smith at the beginning of Intimations, an affirmation I took to heart. “And writing means being overheard.”

Smith’s six essays in Intimations are both monologue and dialogue, inspired by her re-reading of Marcus Aurelius’ Meditations during the fraught early months of 2020.

“Talking to yourself can be useful,” objects Zadie Smith at the beginning of Intimations, an affirmation I took to heart.

March slowly brought the realization that vectors of the unpredictable were all around us and we couldn’t escape them, even if we stayed six feet away. As many New Yorkers grasped at exits, Smith reached for Marcus Aurelius’s dialogue with himself in order to dialogue with herself. How many of us, quarantined with our own uninterrupted thoughts, would have welcomed an interlocutor—a philosopher, sure, or simply another voice besides our own?

Smith’s gentle, poignant writing provides a voice through which readers can revisit a year filled with eerie peace and dread. Eavesdropping on her internal monologue in Intimations provides us an opportunity to dialogue with our own experience of 2020. Each topic Smith tackles— a Trump press conference, America’s mercenary outlook on death, or the civil rights movement exploding in the wake of George Floyd’s murder—she illuminates.

My grandmother sent me a copy of Smith’s book last October. I read it with my morning prayer and coffee on my favorite park bench. As I sat on the bench where I have spent nearly every morning of the past year, Smith’s internal dialogue became a bridge of shared conversation with my grandmother. Perhaps to be overheard talking to oneself is not such a bad thing after all.

This article also appeared in print, under the headline “Talking to yourself,” in the March 2021, issue.