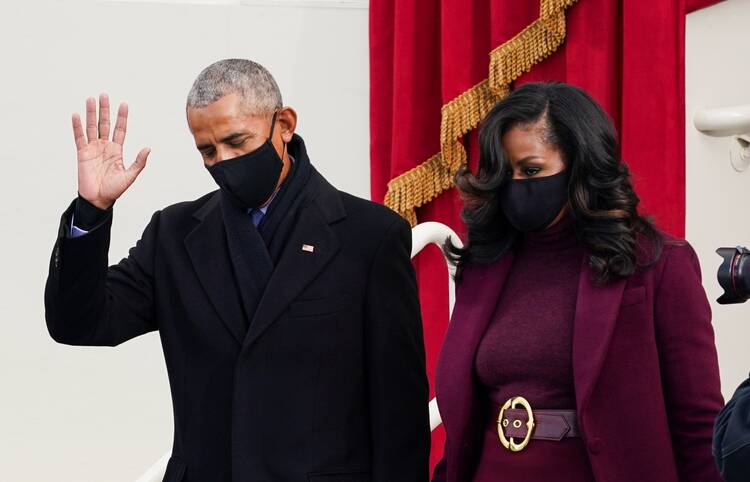 Barack Obama’s voice in his writing is almost as unmistakable as it is when he is speaking.

Perhaps because that baritone has become so unfailingly recognizable, it is difficult to sift through A Promised Land, the first volume of Mr. Obama’s presidential memoirs, without hearing each story, from the most personally stirring to the most politically dry, in that distinctive timbre.

One of the strengths of A Promised Land is that through that voice and personality, readers get to know a host of colorful characters who played a role in the campaign for the presidency and Obama’s first term in office. They include a fiercely opinionated Vice President Joe Biden, hilarious foils in Angela Merkel and Nicolas Sarkozy, and a beloved friend in body man Reggie Love. Of course, constants in the story are Michelle Obama and the couple’s daughters, Malia and Sasha, to whom the volume is dedicated.

Getting through a book of this length can be a bit arduous at times, in part because of Obama’s desire to give every person and every debate a fair, (mostly) unbiased, two-sided shake in his descriptions. Before he lands on a criticism of anything or anyone, he provides detailed background. Even the most partisan debates get a “You have to understand that…” disclaimer, and even a few of Mitch McConnell’s merits get airtime (although the former president’s ultimate judgment on McConnell ends up being decidedly unfavorable).

Obama insists repeatedly that American ideals are worth our faith and that we as Americans are capable of collaboration and comity.

Obama insists repeatedly that American ideals are worth our faith and that we as Americans are capable of collaboration and comity. Sometimes this insistence feels out of place, even outdated. Rather than providing a note of hope for what the country can be like, the notion seems like a figment from the past that does not hold much relevance in the year 2020.

Still, when one reads about the challenges of Obama’s presidency, one gets the feeling that if this man can find a way to be optimistic about the state of the union, maybe it is not a hopeless cause. If his descriptions of the partisan gridlock and economic catastrophe of his first term don’t convince one of the stresses of the job, the ending of this first volume—the account of the military operation that killed Osama bin Laden—will.

The release date for what promises to be a highly anticipated second installment of the former president’s memoirs has yet to be announced; in light of Joe Biden’s upcoming presidency, Obama’s reminiscences of his second term may take on a new meaning for readers. Without a doubt, that unmistakable voice will be there telling his stories—policy chops and dad jokes and all.