Review: What would Jesus say about white privilege? 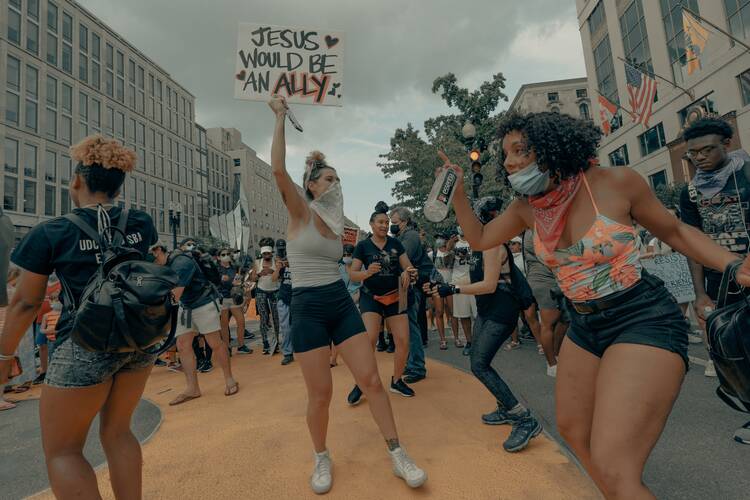 Khyati Y. Joshi’s timely new book raises important questions before one reads even a single page: How will Joshi define “white”? Or “Christian”? Or even “privilege”? Joshi offers up historical context, as well as contemporary interviews and anecdotes, to shine “a light on Christian privilege and its entwinement with White privilege” as well as to “equip readers with tools and ideas regarding how they can recognize it operating in our society and foster a more equitable environment for all.”

To deny that white Christians enjoy a substantial amount of structural advantage in the United States would be absurd. That has not stopped the cries of “reverse racism” or yearly suggestions on Breitbart that there is a “war on Christmas” or the continued success of fringe organizations like One America News Network.

This is a shame because Steve Bannon’s enraged acolytes are among those who could use a strong dose of what White Christian Privilege serves up. Look no further than President Trump’s dangerous, deeply offensive, Bible-toting stroll to St. John’s Episcopal Church back in June. Nearly as outrageous as Mr. Trump’s publicity stunt is the fact that he or members of his administration apparently believed this bizarre move might play to at least a certain segment of the Republican base.

To deny that white Christians enjoy a substantial amount of structural advantage in the United States would be absurd.

But Joshi is not only challenging reactionary evangelicals. “This book is not an exercise in political correctness,” she declares early on, noting that “popular and academic authors have railed against Christianity in particular, and we can find bias against religion...in higher education and social justice or progressive circles. Religion is the last topic some of my progressive colleagues in ethnic and Asian American studies want to discuss.”

Joshi bluntly and deftly analyzes two centuries of Supreme Court decisions that buttress what she characterizes as “three specific, related, and mutually supporting phenomena” in the United States: “Christian privilege, Christian normativity, and Christian hegemony.” From Johnson v. McIntosh (1823), which “endorsed the White Christian Supremacist effort to take Native American lands,” through the notorious World War II Korematsu decision and up to Burwell v. Hobby Lobby (2014), Joshi argues the Supreme Court has reinforced white Christian privilege, in part because “most Supreme Court justices are themselves born, raised, socialized, and educated within the symbols and structures of White American society, with its deep Christian normativity.”

Joshi’s heavy use of academic jargon is likely to irk some readers, as will assertions like this: “The attitudes of White Christians who would never pick up a tiki torch or fly the Confederate flag nevertheless give license to those who would.” Still, most of her claims about the degree to which Christianity influences everything from work schedules to hairstyles are difficult to refute.

Joshi does, however, miss a valuable opportunity to explore how American institutions have evolved in recent decades. Since the 18th century, when (as Joshi points out numerous times) the 1790 Naturalization Act limited full citizenship to “free white men,” the nation’s corridors of power have been “overwhelmingly Anglo-Saxon and Protestant.” Yet today’s Supreme Court has not a single justice who was born a Protestant, which likely would have horrified the dominant “native stock” from not that long ago, with its (in Joshi’s words) “anti-immigration, racism, anti-Catholicism, antisemitism, and pro-eugenics beliefs.”

Has a Supreme Court dominated by once-reviled outsiders (Catholics and Jews) done anything to undermine “Protestant hegemony”? How and why did the likes of Samuel Alito Jr. or the late Antonin Scalia (each a son of immigrants) become agents of the very WASP power structure their parents so offended?

Khyati Joshi: “The attitudes of White Christians who would never pick up a tiki torch or fly the Confederate flag nevertheless give license to those who would.”

Joshi dives into the murky waters of “whiteness” and the social construction of race, but this tends to obscure as much as it clarifies. She informs us that “the Catholicism of John F. Kennedy—still today, the nation’s only Catholic president—prompted great public hand-wringing” but also that “mid-twentieth century America was a time when ethnic difference among Whites ‘melted away’ and created a new imagined reality in which Catholicism, Judaism, and Protestant faiths were reimagined as the three ‘pillars of democracy.’”

Modest as this may sound in 2020, the ramifications of past “demographic shifts” for Joshi’s tripartite title are quite profound but never explored. For example, certain politicians (Jeff Sessions, a former senator and attorney general, for one) use this recent past as an endorsement of new immigration restrictions, like those passed in 1924, to give today’s immigrants time to assimilate and advance. This naïvely ignores the parties—particularly African-Americans—who were long legally excluded from this new chapter in American pluralism, an injustice Joshi notes and which has had profound consequences.

But progressives have their own shortcomings when it comes to immigration and hegemony.

Even if one believes that once-despised huddled masses from the Mezzogiorno or Bialystok consciously struck a racial bargain for modest privileges (Joshi has little to say about class), who is to say the children of immigrants from Hunan Province or Punjab or Santo Domingo won’t strike similar bargains? In this sense, Joshi’s skepticism about American demographic change is welcome.

For decades, pundits and journalists have been counting down the days to when white people will become a “minority” in America. Much of this coverage, like Paul Starr’s essay on the “emerging Democratic majority,” published in The American Prospect way back in 1997, was aimed at tweaking conservatives who (it was assumed) could do nothing to resist a “majority minority” America.

Yet as Joshi notes, whatever demographic changes may be in the offing, “275 years of embedded advantages in our laws and public policies are not going to disappear overnight.” After all, the looming majority-minority shift is really just a statistical sleight of hand, relying as it does on millions of Americans who identify as both white and non-white.

That identity and structural power remain such slippery entities may well undermine Joshi’s own ambitious hopes of “dismantling...the edifice of White Christian supremacy, brick by brick.”

What, then, can be done?

“There are positive models for what Christian faith in the public sphere can look like,” Margaret Renkle observed recently in The New York Times, highlighting the advocacy and activism of the Rev. Stacy Rector, Rev. Becca Stevens and even Daniel J. Berrigan, S.J. And as important as it is to challenge and interrogate sprawling structures, feeding the hungry and comforting the afflicted on a daily basis is certainly revolutionary in its own way. That reminds us that the “Christianity” Joshi identifies as the source of so many social problems can also play a significant role in many solutions.

This article also appeared in print, under the headline “Christianity and entitlement,” in the October 2020, issue.

Tom Deignan, a regular America contributor, has written about books for The New York Times, The Washington Post and National Catholic Reporter.