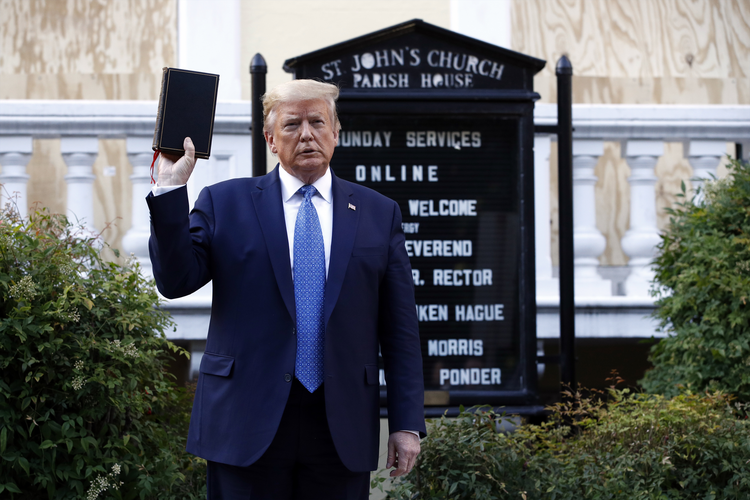 President Donald Trump holds a Bible as he visits outside St. John's Church across Lafayette Park from the White House Monday, June 1, 2020, in Washington. Part of the church was set on fire during protests on Sunday night. (AP Photo/Patrick Semansky)

“And now I am going to pay my respects to a very, very special place.”

This is how the president dramatically concluded Monday evening’s speech about the continued protests and clashes with police underway in nearly every metropolitan area. Minutes beforehand, and 30 minutes before Washington, D.C.’s curfew went into effect, police fired rubber bullets and tear gas into a crowd of peaceful protesters to clear the path from the White House to St. John’s Episcopal Church, which during protests on Sunday evening had a small fire set in its basement.

The president held up a Bible with the same confidence that I have when I use a power tool—which is to say, very little.

After protesters, along with priests from Washington’s Episcopal Diocese who had been offering them water and hand sanitizer, were gassed and dispersed, the president walked across the street to the church, stood outside and faced the cameras.

The president held up a Bible with the same confidence that I have when I use a power tool—which is to say, very little. “Is that your Bible?” a reporter shouted to him. “It’s a Bible,” he muttered back, in a true you-have-to-see-it moment:

Then he left. He did not pray. He did not go inside. He had not even informed the rector of the church nor the governing bishop that he would be coming. Perhaps in the president and his advisors’ eyes, he didn’t need to. He had his picture taken holding the Bible in front of one of the country’s most famous churches, boarded up.

The message was not difficult to parse: You and your church are under attack. I will use your symbols, you can use my power. I am going to protect it and defeat the attackers with whatever force is necessary. We’re on the same side.

He did not pray. He did not go inside. He had not even informed the rector of the church nor the governing bishop that he would be coming.

As McKay Coppins summarized in The Atlantic: “Most white conservative Christians don’t want piety from this president; they want power. In Trump, they see a champion who will restore them to their rightful place at the center of American life, while using his terrible swift sword to punish their enemies.”

St. John’s and the rest of the Episcopal Church saw this for what it was. “We want St. John’s to be a space for grace, as a place where you can breathe,” the Rev. Robert W. Fisher, the church rector, told The Washington Post. “Being used as a prop, it really takes away from what we’re trying to do.”

It is clear that the president is trying to pull the church and the Gospel into a culture war that is tearing our country apart.

Today, perhaps in an effort to shore up the 60 percent of white Catholic voters who helped put him in the White House, the president visited the St. John Paul II National Shrine, also in Washington. (Someone may have counseled the president that we Catholics are more often wooed with shrines and saints than with Scripture.)

Coupled with last night’s stunt at St. John’s (to use only immediately recent examples), it is clear that the president is trying to pull the church and the Gospel into a culture war that is tearing our country apart.

It even feels disingenuous to say “culture” war when actual violence is ravaging our cities and the real military is being readied to intervene. In “normal” times, manipulating the church like this would be (and has been) crass; under current circumstances, it is dangerous and antithetical to the Gospel message of peace. The church should resist it at every turn.

The president has stepped far over the line of what the church should tolerate, just like he did in the much-discussed campaign phone call with Catholic leaders that was ostensibly about Catholic education.

Thankfully, Wilton Gregory, the first black archbishop of the nation’s capital, understood this. “I find it baffling and reprehensible that any Catholic facility would allow itself to be so egregiously misused and manipulated in a fashion that violates our religious principles,” Archbishop Gregory said in a statement released as the president was arriving at the shrine.

While the world continues to devolve into unordinary times, the church today re-enters the opposite liturgical season. Today’s Gospel reading in the lectionary, which is proclaimed at Catholic churches all over the world, concerns the relationship between the church and secular government:

Knowing their hypocrisy he said to them,
“Why are you testing me?

It is not quite correct that the church should not “take sides” in conflicts. True, the church is not and should not be political in the sense that is beholden to an ideology or political party. But the church absolutely is called to take sides: the side of peace, of the marginalized, of the powerless crying out. These are what and who belong to God.

Zac Davis is an associate editor for digital strategy at America and a host of the podcast Jesuitical.