Review: How (and why) to reinvent journalism as we know it 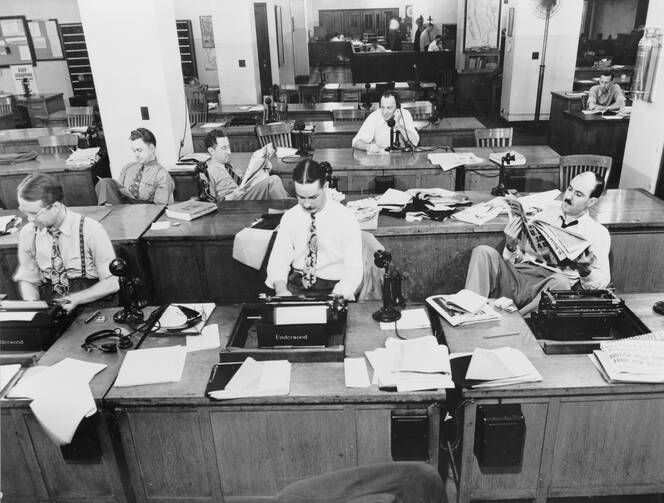 On March 11, as the Covid-19 pandemic crisis erupted in the United States, Megyn Kelly, the former Fox news anchor, complained on Twitter about a lack of credible sources. “Even I as a journalist am not sure where to turn for real info on COVID,” she wrote.

Kelly is not alone in asking that question. Ironically, there have never been so many good answers: We can read all the world’s newspapers, libraries and scientific reports from our phones. This country’s trio of great newspapers, The New York Times, The Washington Post and The Wall Street Journal (where I worked for 13 years) employ thousands of journalists skilled at making phone calls, checking facts and writing useful and evocative true stories. When they make mistakes, they print corrections.

Democracy without Journalism? by Victor Pickard

So why do we feel so unmoored, as if our democracy were suffocating from a lack of truth and a surfeit of shouting and drowning in Russian propaganda, Kardashian gossip and cat videos? Answers include a decline of good local news options, an overabundance of information and, of course, President Trump’s relentless bashing of journalists. The media scholar Victor Pickard’s sharp new book, Democracy Without Journalism?, focuses mainly on the first issue.

A strong national network of newspapers has always been at the core of American democracy.

A strong national network of newspapers has always been at the core of American democracy. The founding fathers considered a free press so essential that it was a main reason to subsidize postal and road systems. “As much as 70 percent of mail delivered in the 1790s, and 95 percent in the 1830s, consisted of newspapers,” Pickard writes. Thomas Jefferson said he would rather have “newspapers without a government” than “government without newspapers.”

You could divide the history of American media into three eras. The first was the pamphleteer period of the revolutionary republic. Political parties and business interests published their periodicals and blasted them out by horseback across the land. The second era began with the industrial revolution. Mass consumer businesses needed ways to reach and persuade customers to buy their soap, toy trucks and bicycles. They bought ads in newspapers.

For 150 years, this model reigned. There was consistent tension between the news-gathering side and the business side of newspapers, and a rich owner could always use his writers to push his (more commonly) right-wing views.

Almost all newspapers are dead or dying, felled by advertisers’ dumping dollars on pixels instead of print. Old-school newsrooms have not been replaced by equivalent new businesses.

But overall, it worked, with a business model replicable at local levels. Every town in the land could count on a newsroom of 100 or so men and women going to the office to check facts, write stories and pump their valuable work back into their communities, holding the powerful—mayors, doctors, factory owners and clergy—accountable. And because newspapers monopolized advertising, they were immensely profitable. You could become one of the richest people in the world by owning one.

Now we are in the third era. It’s a mess. Almost all newspapers are dead or dying, felled by advertisers’ dumping dollars on pixels instead of print. Old-school newsrooms have not been replaced by equivalent new businesses.

During the morning time they once spent reading 800-word stories on paper, people stare at a screen scrolling Facebook. In the evenings, there is national television to watch, stations chosen to accord to your political beliefs. The president is a reality TV star decrying “fake news,” which is simply any coverage he deems too critical.

The United States “has essentially conducted a hundred and fifty-year experiment in commercial journalism by treating news as both a commodity and a public service,” Pickard concludes. “With the latter function driven into the ground by the market, this experiment has largely failed.”

The modern media landscape still includes some great legacy newspapers, mentioned above, and magazines like The Atlantic and The New Yorker. In the new world, rich owners, like Jeff Bezos, can help keep things stable. There are a number of digital start-ups that cover things many people care about, such as politics and sports. There are news organizations, like ProPublica, the Marshall Project and NPR, funded by foundations and some public money.

James Madison wrote that a popular government “without popular information, or the means of acquiring it, is but a prologue to a farce or a tragedy, or perhaps both.”

But none of those solve the problem of how a city council meeting in Iowa gets covered. “When a journalist shows up these days, it’s this weird thing, like what are they doing here?” a councilwoman I interviewed in Iowa City told me recently.

Pickard aims to help “reinvent journalism” by working out a new economic model based on some sort of public subsidy for reporting outlets all over the country. Instead of seeing journalism as primarily a business, we should view it as a public service. “Any progressive agenda worth the name must fight for an adversarial news media that provides accurate information about social problems, challenges powerful interests, and opens up a forum for underrepresented voices and alternative visions for society,” he writes.

The Problem with Local Journalism
The Editors

Pickard offers examples of other countries that subsidize public media, present and past. In 2016, for example, the BBC assigned 150 “local democracy reporters” to news organizations around the country. “Whereas Japan, Britain and Northern European countries spend anywhere from $50 to well over $100 per capita on public media, the United States government allocates about $1.40 per person per year,” he writes.

In 1912, Los Angeles launched a city-owned newspaper, The Los Angeles Municipal News. The paper, governed by three citizen-volunteers appointed by the mayor to four-year terms, had a circulation of 60,000 copies. The paper’s masthead read, “A newspaper owned by the people.” It covered local government matters and offered both sides of all important arguments. In 1913, voters chose to defund it after a campaign by commercial newspapers. “Voted into existence and supported by local taxes, the municipal paper stands testament to a largely forgotten alternative to the commercial newspapers,” writes Pickard.

But even if all of Pickard’s ideas were planted in welcoming soil, we are not going back to three networks, Walter Conkrite and a private local paper or two in every town. James Madison wrote that a popular government “without popular information, or the means of acquiring it, is but a prologue to a farce or a tragedy, or perhaps both.”

Whatever happens, we are sure to be presented with even more possibilities. The choice to limit farce and tragedy will be, more than ever, up to us.

This article also appeared in print, under the headline “Reinventing journalism,” in the May 25, 2020, issue.