Review: How the Weimar Republic paved the way to its own ruin 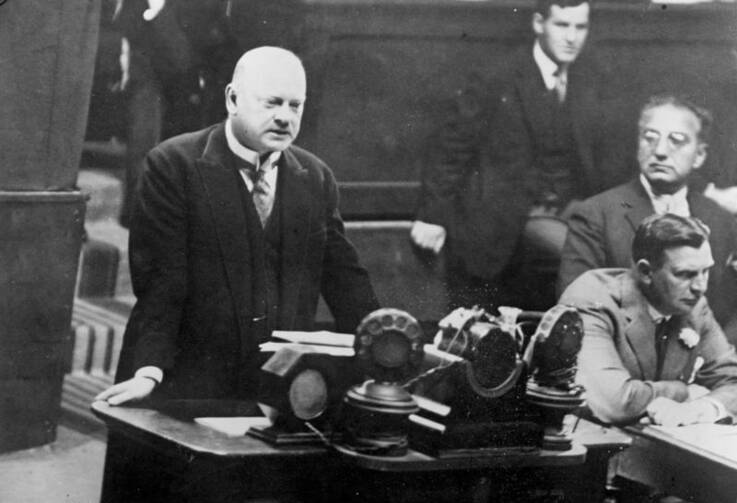 Gustav Stresemann, Foreign Minister of the Weimar Republic from 1923 to 1929, at the General Assembly of the League of Nations in Geneva. (Wikimedia Commons).

If the object of learning history is indeed to avoid repeating it, there can be few histories more worth knowing than that of Hitler’s rise to power. As Americans debate far-right movements, weakened political institutions and even what exactly constitutes a “concentration camp,” the question of just how the Weimar Republic became the Third Reich is more relevant than ever.

For those looking to understand how a flawed but genuine democracy could give way to the vilest regime imaginable, Benjamin Carter Hett’s The Death of Democracy: Hitler’s Rise to Power and the Downfall of the Weimar Republic provides a solid foundation. Hett does an admirable job explaining the actions of leading figures of the Weimar era based on what they knew then. One can almost begin to see the logic behind some of the decisions key players made, even while knowing where they eventually will lead.

It goes without saying this is not comforting reading. There are many parallels to U.S. politics, often where least expected. Conservative elites who thought they could use the Nazis to their own ends—for German rearmament, for example—emerge as perhaps the clearest facilitators of Hitler’s rise. But the left, with its tendency toward factionalism, is also implicated. Among the most tragically shortsighted decisions in a book full of them is the German Communist Party’s decision to identify the Social Democratic Party, not the Nazis, as their main enemy. Once a critical mass of the left had abandoned a commitment to democracy, the center could not hold against the far right.

The most striking revelation in the book was how progressive the Weimar Republic was. This was a model democracy, with a constitution that included proportional representation. Berlin was a diverse city, a capital of culture and leftist politics.

The most striking revelation for me in the book was how progressive the Weimar Republic was. This was a model democracy, with a constitution that included proportional representation. Berlin was a diverse city, a capital of culture and leftist politics. A movement for L.G.B.T. rights in Weimar Germany was decades ahead of similar movements in the United States. And though most Germans shared grievances with the Nazis over the Treaty of Versailles, it was not inevitable that another war would break out over them. Some, like Foreign Minister Gustav Stresemann, believed that diplomacy and European integration were the best way to advance German aims. What might have been had Weimar democracy been allowed to grow up?

Yet it was not to be. Hett’s book ultimately paints a dispiriting portrait of a doomed democracy, under siege from all sides. The one thing that can be said in defense of the Weimar Germans is that they did not know how bad it could get.

This article also appeared in print, under the headline “Paving the way to their own ruin,” in the April 27, 2020, issue.

@AntonioDeLoeraB
Provide feedback on this article
Join the conversation: Login or create an account
Before you can comment, you need to update your profile to include your first and last name, as required in our comments policy. Then reload this page and you'll be set up for commenting. Update your profile