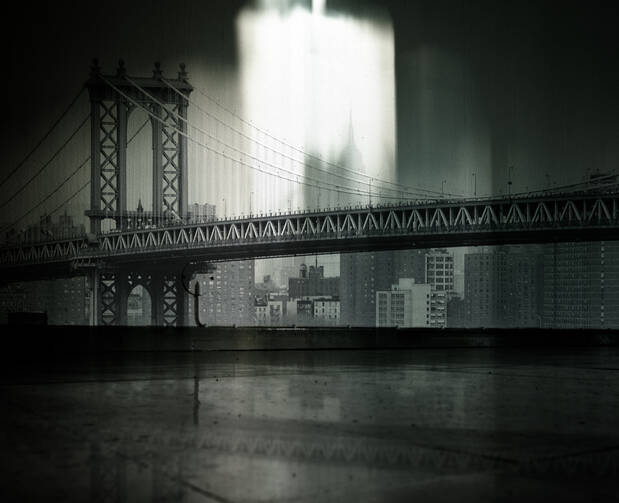 When challenged by a friend in the 1960s about why he didn’t take his church’s peace teachings more seriously, the playwright and author Joseph Caldwell called his friend’s bluff and dragged him to a protest led by Dorothy Day. The pair was awed by the sight of her.

In the Shadow of the Bridge by Joseph Caldwell

“She carried a hand-painted sign quoting Pope John XXIII about peace and disarmament. Unlike most celebrities, she looked just like her pictures—somewhat tall but not imposing, the gray hair with the braid circling her head, the high cheekbones, her expression both thoughtful and relaxed. Maybe ‘patient’ is the best way to describe it.”

That is how Joseph Caldwell recalls his foray into the Catholic Worker Movement, chronicled in his new book, In the Shadow of the Bridge. Caldwell and his companion were arrested at that protest—part of their plan—but they were released and so did not spend the night in jail, much to the author’s disappointment.

What makes In the Shadow of the Bridge unique is Joseph Caldwell's unabashed Catholicism juxtaposed with a fearless openness about his own sexuality.

Caldwell is not the first Catholic of a certain age to recall wistfully their experience in the peace movement. What makes this book unique is his unabashed Catholicism juxtaposed with a fearless openness about his own sexuality.

“I am close to being a congenital Catholic,” Caldwell writes. “It’s almost encoded in my genes to the same degree and with the same imperatives as my homosexuality. I could not not be a Catholic any more than I could not be of Irish ancestry, or than I could not be a male of the human species.” He avoids the temptation to dwell on the challenges he has faced as a gay Catholic, but he does not entirely shy away from them either.

“My faith has never felt dangerously challenged, even by my having been duly informed by the Roman hierarchy that I am—by choice no less—an abomination,” he writes.

With a style that at times evokes the memoirist David Sedaris, Joseph Caldwell recalls his own Catholic boyhood with fondness, particularly lessons instilled by his parents.

With a style that at times evokes the memoirist David Sedaris, Caldwell recalls his own Catholic boyhood with fondness, particularly lessons instilled by his parents. He remembers a long-term houseguest welcomed into the family home whom he didn’t care for. When she became pregnant and left for a short trip, apparently to have an abortion, he sensed an opportunity to raise the issue with his parents. Surely they would not approve of such a person living under their roof. He recalls the moment he raised the question with his mother.

“My mother’s response was quiet but firm and I can quote her words without revision. ‘We don’t know that. All we know is that she’s lost her baby. And if she did have an abortion, doesn’t that mean she needs us more than ever?’” he writes, adding that he didn’t feel shame at his mother’s rebuke. Instead, “I felt, with a quiet of my own, only amazement. So this is what our religion was all about. It was not about sin and guilt and judgment. It was about caring—a simple caring for those most in need, no matter what.”

[Listen to “Plague: Untold Stories of AIDS and the Catholic Church,” a new podcast from America Media hosted by Michael O’Loughlin.]

Living in New York in the 1980s and ’90s, Caldwell was attuned to the plight of gay men suffering from H.I.V. and AIDS. These episodes account for some of the most moving in the book.

I am gay and Catholic. Are you willing to walk in my shoes?
Patrick Gothman

He recalls encountering a fictional portrayal of Catholic nuns as being hostile to gay men during the AIDS crisis. He contrasts this with his own experience working alongside “a real, live nun, Sister Patrice Murphy,” who “had already put in place a hospice program for those with AIDS—with the full cooperation of her Order and her hospital.” Part of Caldwell’s role as a volunteer was to “diminish the experience of abandonment suffered by most of the patients, the repudiation by family, the avoidance of longtime friends, and the general isolation the illness exacted.”

The challenges notwithstanding, Caldwell presents his life as a gay Catholic as a gift.

“I have come to see my homosexuality as a form of grace,” he writes. “Because of my outcast state, I was forced to think for myself.”

This article also appeared in print, under the headline “Life as a gift,” in the March 2, 2020, issue.