There’s something about Mary Magdalene 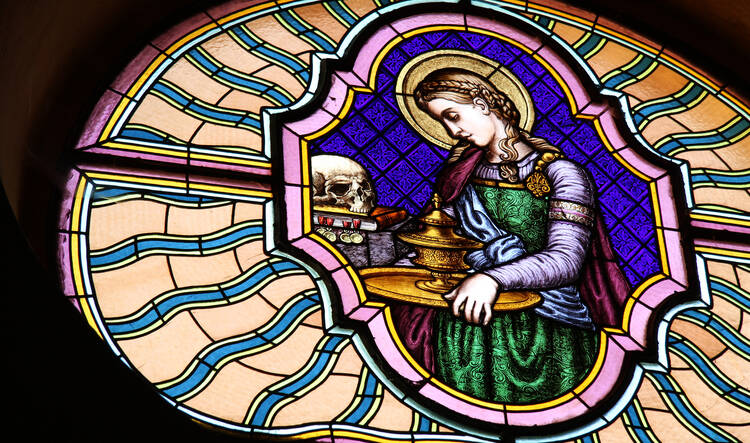 Author’s note: This article addresses the first half of The Magdalene in the Reformation, from the Introduction through page 126.

There really is something about Mary...Magdalene. In February 2006, Joan Acocella offered her summary of a number of presentations of Mary Magdalene—both contemporary and ancient, crude and scholarly—as a staff writer for The New Yorker. She began her piece with a rather gripping introduction to the saint’s historical standing.

The Da Vinci Code, of course, is her first example, where Jesus is depicted as having married Mary Magdalene. A primary source for that novel, the 1982 book Holy Blood, Holy Grail, proposes that after the crucifixion, Mary Magdalene and at least one of their children escaped to France, where their descendants married into the Merovingian dynasty. “Nobody knows this, though, because, according to the authors’ scenario, the truth has been kept under wraps by a secret society called the Priory of Sion,” Acocella writes. That tale is just one of many told about Mary Magdalene in movies, novels and religious art to this day.

Mary Magdalene gets only 14 mentions in the New Testament. But those 14 mentions do not reflect her sudden significance in the Gospels after Jesus’ Resurrection.

Later, Acocella notes that Mary Magdalene “gets only 14 mentions in the New Testament. Luke and Mark describe her as the subject of one of Jesus' exorcisms—he casts seven demons out of her, and as one of several women who followed him.” But those 14 mentions do not reflect her sudden significance in the Gospels after Jesus’ Resurrection:

Each of the Gospels tells the story a little differently, but, basically, the Magdalene, either alone or with other women, goes to the tomb on the third day to anoint Jesus’ body, and and it is to her (or them) that an angel or Christ himself announces that he is risen from the dead, and instructs her to go tell this to his disciples. That command gave the Magdalene a completely new standing. The Resurrection is the proof of the truth of Christian faith. As the first person to announce it, Mary Magdalene became, as she was later designated, “the apostle to the apostles.”

Acocella’s portrait of Mary Magdalene suggests controversy, complexity and later an ecclesial (clerical) manipulation of her identity to delegitimize her standing as the first New Testament witness to the resurrection. But Mary Magdalene’s actual history, as Margaret Arnold tells us in The Magdalene in the Reformation, is much richer. The tradition’s appropriation of Mary Magdalene is much more intricate and complex—as the saint herself is complex.

The varying emphases that can be found in different versions of [Mary Magdalene's] story point to the preoccupations of those who gave her voice, to the questions that interested, inspired, and infuriated them.

Throughout the history of the Christian church, Mary Magdalene has been paired with a variety of scriptural figures. The first pairing is of Peter and Mary, who are often presented as rivals. In the 17th century, the French Catholic archbishop Charles Vialart noticed that though Jesus does not permit Peter and the disciples to wash his feet at the Last Supper, Mary (in the Luke 7 composite) has already washed Jesus’ feet in her repentance. Arnold writes, “Vialart stresses that the saint was selected for this [preaching the Resurrection to Peter and the Apostles] prestigious role because of love—both Christ’s love for her and hers for him, making the choice appropriate” (111). Mary’s recognition of the divinity of Jesus Christ comes in a rather mundane, domestic setting (Luke 10), while Peter needs the drama of the Transfiguration to grasp the glory of Jesus (35).

Even in the medieval cult of saints, there is a sense of tension between Peter as symbolic of ecclesial authority and Mary Magdalene as representative of a divinely inspired prophet (36). Among the reformers, such as Anne Askew and her biographer John Bale, Mary Magdalene’s Christ-directed mission to preach was granted by the “special exigency of need: when the Word was not properly being taught and defended, in situations of persecution or confessional strife, it was the duty of female believers to bear public witness to the Gospel” (72).

Throughout the history of the Christian church, Mary Magdalene has been paired with a variety of scriptural figures.

In short, Mary and Peter are defined and linked by their intimacy with Christ, their authority extended to them by Christ, their tears of conversion and contrition. But it was Mary, at the tomb, who took over for Peter and enacted the ministry of preaching in the vacuum of his inadequate leadership. For reformers, Mary rights the ship in the vacuum of abdicated and distorted male, apostolic leadership. Reformers—lay men and women—would do the same in their own time.

A second pairing is that of Mary Magdalene and Eve. In Martin Luther’s writings, Arnold writes, Magdalene upends Eve: “In contrast to the presentation of Eve in [Luther’s] Lectures of Genesis, whose ‘substitution of the devil’s word for the word of God’ serves as a kind of perverted preaching to Adam, Mary Magdalene speaks the news of the resurrection as she is commanded to by Christ and by angels; that the disciples in the different Gospel accounts fail in various ways to believe her message is no fault of her own” (44).

Around the same time as Luther, a Franciscan preacher offered the following at Easter: “The resurrection was ‘spoken and announced to the apostles by women; because by a woman death was announced, so through a woman life was resurrected’” (101). Even in songs of the early 16th century, Mary Magdalene “figures as a new Eve, reversing, in the arc of her own life, the story of the Fall” (120).

Mary Magdalene further resembles John the Baptist as a figure of repentance and recommittal to God (38). Likewise, Mary’s status as prophetess connects her to Hannah (Anna in the Presentation at the Temple) of Luke 2 and the daughters of Philip in Acts 21. In the contemplative tradition, the Mary of Luke 10 (Mary and Martha) is reminiscent of the speaker of the Song of Songs (22).

There is even a medieval tradition that had Mary Magdalene as the bride of John the Evangelist at the wedding feast of Cana (20). Mary Magdalene’s character draws others to her and clearly excites connections and comparisons among those who contemplate her witness to the risen Christ.

Mary Magdalene’s character draws others to her and clearly excites connections and comparisons among those who contemplate her witness to the risen Christ.

Toward the beginning of Arnold’s history of the conception of Mary Magdalene in the years of the Reformation and Early Modern Europe, she offers the following summary of her work:

Over the centuries, Mary was made to speak not only her good news but also her whole story, a chronicle of sin and redemption that contains within it humanity’s fall and salvation. Her progress from sinner to penitent, from prodigal to ascetic, from witness to missionary, describes the arc of the church’s founding narrative. The varying emphases that can be found in different versions of her story point to the preoccupations of those who gave her voice, to the questions that interested, inspired, and infuriated them (18).

Mary Magdalene’s identity, at least from the time of Gregory the Great’s sermon at Easter in 591 C.E., has been a composite of three biblical texts and three essential identities: Luke 7:36-50 (beata peccatrix: the blessed/happy sinner—and “sinner” here is rendered in female form); Luke 10:38-42 (contemplative); and John 20:1-18 (“apostola apostolorum”: the apostle—again, the Latin form denotes a female apostle—to the apostles). Within the composite identity, Arnold argues that various Reformation and Counter-Reformation figures emphasize parts of the composite to align with an array of religious claims they wanted to underscore: the priesthood of believers; the inadequacy and tyranny of clerical leadership (72); the importance of penitence, sorrow for sin and the work of charity (111).

How can the church honor women? Elevate Mary Magdalene’s feast to a solemnity
Alvan I. Amadi

Who was Mary of Magdala?
James Martin, S.J.

But there seems to be one aspect of Mary Magdalene that is a part of each element of the composite. Mary’s intimacy with Jesus cements her authority and underpins the importance of each aspect of her identity. This intimacy makes her stand out among all of her foils—Peter, Eve, John the Evangelist, ordained clergy. The words “intimacy” and “intimate” appear nearly 50 times in Arnold’s book. Mary Magdalene’s authority comes from her intimacy with Jesus Christ.

Mary Magdalene's intimacy with Jesus cements her authority and underpins the importance of each aspect of her identity. This intimacy makes her stand out among all of her foils—Peter, Eve, John the Evangelist, ordained clergy.

This fact becomes a refrain for Arnold in her presentation of Mary: in both the reformer and early modern Catholic traditions: “The Magdalene had been the first witness of the resurrection, according to the reading of Luther and his colleagues, because of her intimate relationship to Christ” (93); an example of loving intimacy with Christ” (111); “the intimacy she had with Christ” (124); and on and on.

The reformers understood in Mary an intimacy with Christ and a mission that they can replicate in their own lives. Such an intimacy licenses public witness to Jesus Christ on the part of lay men and women (in some situations). For early modern Catholics, such an intimacy is afforded one who empties oneself in contrition for sin and enacts love in the all-consuming, often contemplative and unitive way that Mary loves Jesus.

1. Do you have a devotion to Mary Magdalene? How would you characterize it? What was your understanding of Mary Magdalene before reading this book?

2. How do the institutions that bear or have borne the name “Magdalene” (Magdalene houses, the Magdalene Laundries of Ireland) affect the way we understand the saint?

3. Do any of the Protestant reformers—Anne Askew, Katharina Schütz Zell, Catharina Regina von Greiffenberg—grab your attenti

4. Have you noticed the emphasis on intimacy with Christ that seems to underlie both traditions’ sense of Mary Magdalene? Are we able to identify with or hope for such intimacy?

Kevin Spinale, S.J., is a doctoral candidate in English Education at Teachers College, Columbia University and is the moderator of the Catholic Book Club.