Pope Benedict XVI speaks in new interview: ‘There is one pope, he is Francis’ 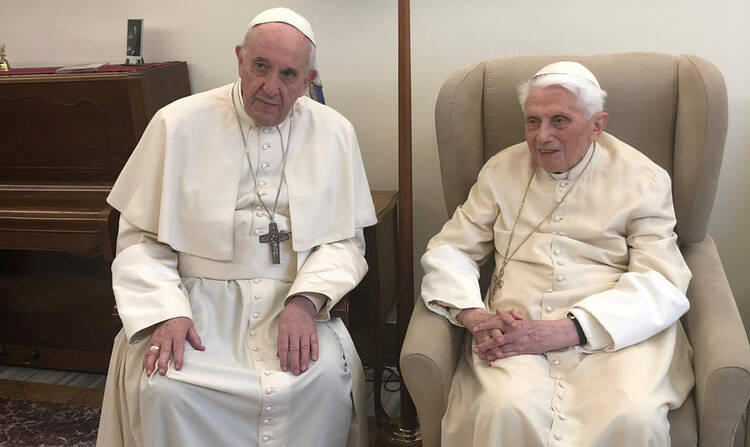 “The adversaries of Bergoglio, often conservatives desperately seeking a word of Benedict that would sound as a criticism of Bergoglio, have unfailingly heard [from Benedict] that ‘There is one pope, he is Francis.’”

That sentence contains one of only a small number of quotations from the 92-year-old Pope Emeritus Benedict XVI found in a long article in the weekly magazine Corriere della Sera, Italy’s best-selling daily, published on June 28.

The other significant quotation from Benedict regards church unity, in which he says: “The unity of the church is always in danger, for centuries. It has been throughout its entire history. Wars, internal conflicts, centrifugal pushes, threats of schism. But in the end, the consciousness that the church is and must remain united has always prevailed.”

The article, written by Massimo Franco, a columnist for Corriere della Sera, reports on a meeting that he and the paper’s cartoonist, Emilio Gianelli, had with Benedict XVI in the Vatican gardens near the monastery behind St. Peter’s Basilica where the retired pope has lived since May 2013. Archbishop Georg Gänswein was present throughout the meeting.

"There is one pope, he is Francis."

“The voice is little more than a whisper, but what he says, and his look, demonstrate a lucidity and rapidity of thought,” Mr. Franco says of the physically frail but mentally acute pope who stunned the world with the announcement of his retirement on Feb. 11, 2013.

While the advance publicity suggested that the article involved a long conversation with the pope, what emerges is something quite different. One of its main aims appears to be that of defending Benedict against “attacks” from some who have sought to “accredit anonymously to others” the text published by the German-theologian pope on the sex abuse crisis that was published on April 11.

The article reveals that in November 2018, the emeritus pope wrote “with great effort, over ten days” with his own hand, three or four pages of “points” that formed the basis for that article which was published in a magazine for clergy in Germany (and simultaneously in the United States in some Catholic media). Then, “after some weeks” he added some more points. He “completed his text” last February.

“The voice is little more than a whisper, but what he says, and his look, demonstrate a lucidity and rapidity of thought,” Mr. Franco says of Pope Emeritus Benedict XVI.

When he had finished writing the text in German, his private secretary, Sister Birgit Wansing, a member of the Schoenstatt Movement, wrote it up on a computer and printed it out for him. Benedict then reviewed the text, made some corrections and changes, and it was then sent for publication.

The article says that “the poisonous polemics” that followed brought to the surface “the fragility of a co-habitation that is not codified by any Vatican law between the pope and the ‘ex-pope.’”

It notes the difficulty of “managing” any “public remarks” by Benedict when the church is “in tension” even though Francis has encouraged him to do so. This is especially the case, it says, “because too many among those who are discontent with the pontificate of Francis look to Benedict as a sort of spiritual leader and moral alternative; and as a security in doctrinal terms.”

The article states that “the emeritus pope has always rejected these attempts. And he has reaffirmed his loyal and affectionate relationship with Francis, notwithstanding the evident differences of personality, approach to doctrine and to liturgy.” At the same time, the article says, “The fears have never disappeared that this almost miraculous balance [in the relationship] between Bergoglio and Ratzinger could break.”

It reveals that some top Vatican officials have pushed for a motu proprio—a kind of executive order issued by the pope—“which would encage Ratzinger in the role of a silent hermit” but Francis would have nothing to do with it. “That document was never approved, nor will it be during the present pontificate,” the article states.

The article reports that while Pope Francis describes Benedict as “a wise grandfather in the home,” Benedict has been “transformed into a shore and a reassuring bulwark for those who do not feel at ease in the church of Francis.”

Mr. Franco claims the April article “reaffirms a theological ‘gravitas’” that has compensated for the more empirical doctrinal approach of some of Francis’ Latin American collaborators” and speaks about the many “most reserved” visits by cardinals and bishops to Benedict “to express their criticisms and perplexity” regarding the present pontificate. The article mentions that Benedict “consoled” Cardinal Muller who was “sacked” two years ago by Pope Francis, when the cardinal’s five-year term of office was not renewed.

The article is perhaps also noteworthy because it reflects much of what Archbishop Georg Ganswein, the private secretary of Benedict XVI, has said in public, including a controversial remark that Francis is “the pope in action” and Benedict is “the pope in prayer.” The latter phrase is also attributed to the emeritus pope.

The article is interesting too because it reveals that still today Benedict reads not only correspondence but also some books and German and Italian newspapers and that he prays the rosary every afternoon in the Vatican gardens. He listens to classical and religious music and sometimes after supper sits and plays the piano.

He still receives some visitors, but much fewer than in the past due to his physical condition. Last but not least, he still loves Italy. He quips, “It is always beautiful but a little chaotic.”